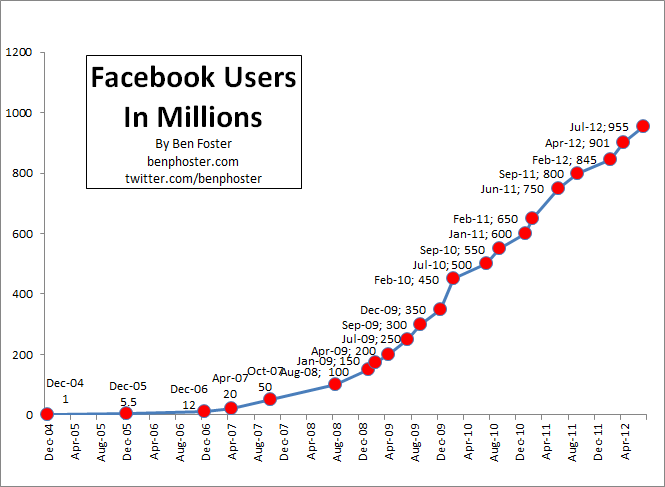 Personally, I’ve chosen NOT to follow Facebook’s stock. I know, you’re surprised. This Facebook junkie, isn’t following the stock? No. I used to be much more active in the stock market, but aside from the fact that I let my financial advisor make a lot of those decisions now, I’ve chosen to focus on what the future of Facebook is – from my desktop. Well, and my smartphone. And my tablet. (Check out ecommerce and mobile marketing trends.)

Facebook is soon to hit the one billion user mark. That’s right, billion, with a “b.” Maybe I should capitalize that, for emphasis:  “B.” Just as Naomi Gleit, Facebook product manager, is looking for the next users, so am I. As a social media marketer, the future of Facebook is crucial to marketing decisions.

Did you know that there is an entire team dedicated to bringing new members to Facebook?

Currently there are 150 such individuals on said team. Gleit’s vision is making the network available to everyone in the world. (Math time. Nearly one billion there now. Two billion worldwide online. Seven billion on earth.) So, about half the internet’s population goes to the site at least once a month – but that’s not enough.

To keep Facebook as marketers’ favorite social network, much work is to be done. Zynga’s earnings are below expected. The IPO was, well, disappointing. Facebook’s growth rate slowed once the site reached 100 million users. (Maybe that was the day my mom joined? And everyone else’s mother.)

So what is Facebook doing to keep you engaged? One of the biggest things is making it easy for new users to feel welcome. Hence the “People You May Know” feature. There’s also the ability to connect with your email contacts (contact importer) and the translation tools.

The GEM team (Growth, Engagement, and Mobile) at Facebook prioritizes their day by watching dashboards of monthly activity by country and keeping users logging in from mobile devices. It is the emerging markets that have the greatest potential for growing the world’s largest social network. Governmental barriers and competitive barriers are all that’s slowing the network down.

What say you? Where do you think Facebook will be in a year?
Five years? Please leave your thought in the comments below.

How To Take Your Social Media from Sideline to Center Stage