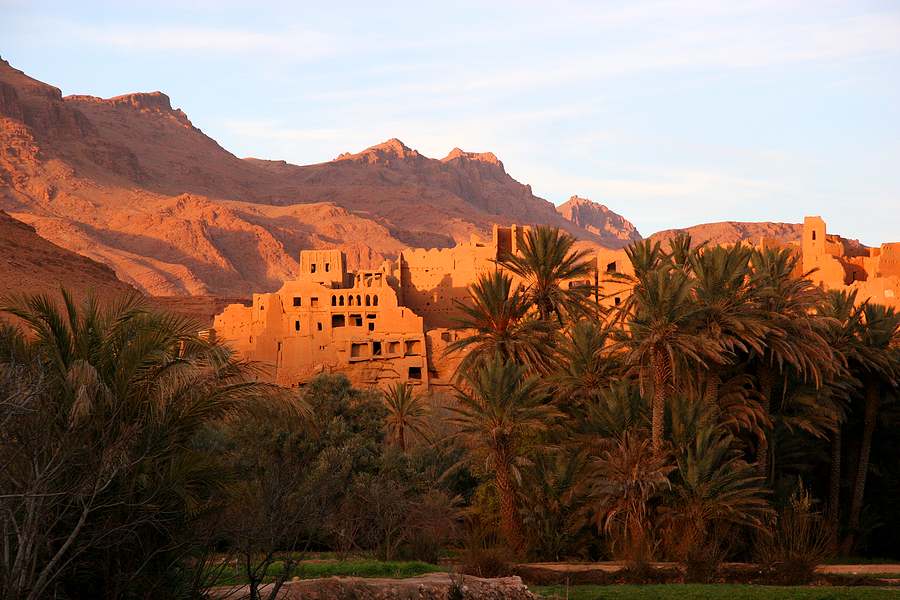 A Guide To Morocco Morocco, or Kingdom of Morocco, is bordered by the Mediterranean Sea (north), Algeria (east), Mauritania (south), and the Atlantic Ocean (west). Primary cities in the region include the capital, Rabat, as well as Marrakech, Casablanca, and Fes. Morocco is a leading producer of phosphates and other important minerals, including copper, iron, manganese, ore, zinc, coal, and lead. Textiles, leather goods, and food processing are other major important economic industries. Fishing and tourism also contribute to the steady growth of the economy. Most Moroccans are a combination of Berber and Arab origin and are Muslim. Small Jewish and Christian minorities also exist. Tourists visiting the country have the opportunity to explore a vast history, new culture, and a different way of life.

Morocco was unified by the Idrisid dynasty in 780, creating the first Islamic state in Africa independent from the Arab Empire. The Berbers had resided in Morocco since the second millennium B.C. The country was annexed by Rome in A.D. 46, as part of the province of Mauritania until the Vandals overran the weakening empire during the 5th century. In 1086, Berbers took over parts of Moorish Spain until their expulsion in the 13th century. The region has experienced a vast amount of invaders, including the Carthaginians, Phoenicians, Byzantines, Vandals, and Romans. By central 1800s, Europe had taken an interest in the country, while the Ottoman Empire was weakening. In 1912, The Treaty of Fez transformed Morocco into a French protectorate. Spain gained control over Tetouan in the north and Ifni in the south. The Rif Berbers rebelled against the Spanish and French authority in the 1920s, with leader Muhammad Abd el-Krim. The Spanish and French task forced united to crush the Rif republic in 1926. Morocco became a constitutional monarchy in 1977.

In the political world, Morocco is considered an Arab or African state. This bilingual country uses both Arabic and French as its official languages. Arabic is spoken by a large majority of the public, however French is taught in schools. More than 40 percent of the population in Morocco is of Berber descent. In the north of Morocco, Spanish is the common language. Clothing styles in Morocco differ from town to town. Influenced by Blakan, Berber, French, Spanish and Turkish traditions, costumes are traditionally composed of heelless, yellow leather slippers known as Baboosh. Men wear long, full-sleeve garments of neutral colors with hoods referred to as djellaba. A red cap called Fez or tarbouche is worn for special events. Djellabas worn by Moroccan women consist of bright colors or ornate patterns. Culinary traditions in Morocco are based on a diet of candies and meats. Traditional meals, such as the harira, is a rich, sweet soup composed of empanda with dove meat, chicken, egg, lamp, cuscus made from semola or vegetables. Almonds and the candies of the kab-el-ghzal are also famous dishes.

Morocco is approximately the size of California, but is home to more than 32 million people. Family values are highly important to the people of Morocco. Elders are greatly respected and provide a strong influence to the other members of the family, especially young children. In common tradition, Moroccan people of the same sex greet one another with a kiss on the cheeks. When visiting someone at their home, it is customary to bring along flowers, dates, pastries or figs. If the household has children, a small gift is given as a sign of affection. In the average Moroccan home, women are responsible for household chores and the wellbeing of the family. Most do not work outside of the home. Men are in charge of providing income for their household. Many work as farmers or in small grocery or corner stores. It is considered offensive for visitors of Morocco to take photographs of the locals without their permission. If visitors maintain a sense of respect and consideration for the locals, most will welcome newcomers with open arms.

Morocco has a relatively liberal economy and is the 5th African economy by GDP. Governed by the law of supply and demand, Morocco has earned second place as the most competitive economy in North Africa, just behind Tunisia. Its economic downfall is the low levels of unemployment and underemployment in the region. Overall unemployment is at 8.6 percent since 2010, and 31 percent among young urban males. Major resources in Moroccan economy include tourism, agriculture, and phosphates. Sale of seafood and fish are also an important economic factor. Morocco maintains its status as the world’s third largest producer of phosphates, after China and the U.S. The growing manufacturing sector accounts for more than 34 percent of total exports and employs nearly 40 percent of the Moroccan workforce. The production of clothing and textiles makes up $1.27 billion in exports. Imports, especially petroleum imports, are another major problem in the economy due to high costs. Another is the problematic rainfall that produces sudden floods and droughts that forces Morocco to import grain.

Visitors to Morocco require a valid passport and the Moroccan Embassy is typically the first port to call. They charge an average of £17 (approximately $22.00 American) for a single entry and £26 (approximately $34.00 American) for multiple entries. Required visas are valid for an average of 3 months and take between 5 and 7 work days to process. Tourists are able to stay up to 90 days or longer with a visa extension. Visitors may be required to obtain an anti-cholera vaccination certificate if coming from a region where the disease is prevalent. Pets entering Morocco need a health certificate that is ten days old or less, as well as an anti-rabies certificate six months old or less. Travel to Morocco can be accomplished by plane, car, or boat. Once in the country, trains are the best way to get around due to their frequency, speed and comfort. Luxury buses are the next best thing, followed by local buses, shared taxi services, or rented vehicle. Overall, Morocco is a safe area to visit and has one of the lowest homicide rates in the world. Visitors should still think smart when traveling to avoid problems. Tourists should always travel in groups, avoid dark alleys, keep money and passports in a hotel safety deposit box or safety wallet, and ensure that there is nothing important on the outside of the body or back pockets. Hustlers can be a big problems for tourists, but a polite but firm “no, thank you” will usually do the trick.