Call me strange, but I am a guy and I am a cat person.  Now, that doesn’t mean I’m a crazy cat person; I just like cats and they tend to like me.  What can I say?  I grew up around cats, and the one dog we had thought he was a cat.  The whole “cat stigma” of aloof, unpredictable creatures living your home is unfortunately the fault of ignorant owners, or as I like to call them, “morons”.  I hear this a lot, “Well I’d like to get a dog, but I don’t really have much time to pay attention to it, so I’m going to get a cat instead.”  Really—so you’re going to buy an animal, and ignore it, then later complain it’s aloof?  That’s great.  I have a broken microwave over here that I’d like you to stand next to.

It’s true, domestic cats start out a bit more feral than domestic dogs.  And because of this, if anything, cats need *more* attention than dogs.  Cats need to be socialized.  I also hear this a lot, “I hate cats, except for yours.  But yours are weird.  They follow you around and actually let you pet them.”  Yes… that’s because they’ve been saturated with attention since I brought them home.  They’re used to people, and actually like them!

Personally, I’m a fan of mixed breeds, but being mixed they have to come from somewhere.  I was recently surprised to discover that Persians are the most popular cat breed in the United States.  As the breed’s name suggests, Persians are indeed originally from Persia.  Many breeders today have begun breeding them to have deformed flat-faces.  Yes, I said it, they’re deformed and have health problems.  If you’re an average Joe like me, seek out a traditional “doll-face” Persian with the more pronounced muzzle.  You’ll be glad you did.

One of my own personal favorite cats is the Maine Coon.  It might seem strange, but this breed is actually specifically native to the state of Maine.  The “Coon” portion of their name comes from their slight resemblance to raccoons (especially their tail).  I personally like them, because they’re HUGE– for a cat at least.  Males can grow to 15 to 25 pounds, as well as up to 40 inches in length.  The cats are perfectly for winter climates as they sport specialized coats and even occasionally polydactyl paws allowing them to traverse more easily through snow.

If you’re a fan of Persians, but on the fence about getting one, this might be the cat for you: the Exotic Shorthair.  It’s effectively a short hair Persian, bred to exhibit the same temperament of Persians without the hassle of grooming that long coat.  Unfortunately, it also inherited the same health problems as the Persian.  If you can find them, try to acquire an Exotic that has a more traditional “doll-face” muzzle.  Breeders don’t like them, but they’re healthier.  And speaking of nutty breeders…

The Ragdoll.  This type of cat gets its name from its tendency to go completely limp when you pick it up.  The breed started out with a Persian/Angora cat named Josephine who was hit by a car in the 1960’s.  Don’t worry, she survived, and gave birth to a litter of kittens.  The breeder, a woman named Ann Baker, claimed that the accident had made the kittens less sensitive to pain, and gave them the characteristic of going limp.  Baker later claimed that secret genetic experiments had been done on Josephine while she was recovering from her accident at the veterinary clinic.  Finally Ms. Baker claimed that aliens had given her the cats.  (I’m not making this up.)  So—yeah… if you want a cat made by aliens from outer space, go get yourself a ragdoll.  If you’re especially into weird cats though then you might want to save your money for…

The Sphynx cat.  Ever seen a naturally hairless cat?  Yep, that was probably a Sphynx.  Suffice to say, breeding the Sphynx was a difficult task as breeders literally had to wait until mutant hairless kittens were born somewhere in the world and mate them with each other (once they grew up).  Today, the breed is stable and healthy– although it does need sun block… and sweaters.  No joke.

If you’re looking for a more… traditional cat, then the Siamese is a safe bet.  Easily one of the most famous cat breeds in the world, the Siamese cat, as its name implies, does indeed originate from Thailand (aka Siam).  Today there are actually two types of Siamese cat.  One is the slender, elongated type we tend to see in cat shows.  The other has the more traditional body shape.  The well known pattern Siamese cats have on their fur is actually a form of albinism in which only the coldest parts of their bodies darken, such as the tips of their ears and the area of their face cooled by their sinuses.  If we’re discussing exotic foreign cats though, there’s a different one I great prefer…

The Abyssinian.  This is one of my absolute favorite cat breeds.  And yes, I’m biased, because I actually grew up with one.  These cats are extremely extroverted and playful, which definitely gives them an advantage when it comes to winning over non-cat people.  While the name Abyssinian would seem to refer to Ethiopia, Abbys are most frequently viewed as the quintessential Egyptian cat.  Suffice to say, they’re a great cat.

Another favorite of mine is the American Shorthair, which to the layman probably just looks like your typical tabby.  But don’t be fooled; these cat’s have pedigree.  Yes—these are effectively your average American cat that just happens to have a pedigree.  They’re healthy, robust, and great hunters, which makes sense, since they’re descended from the cats who would catch mice and rats on ships voyaging to the new world.

If you’re looking for one of the friendliest cat breeds in the world, then look no further than the Cornish Rex.  This cat features an especially unique coat made entirely of soft undercoat.  The fur is also beautifully wavy.  Because of this, Cornish Rexes are ideal indoor cats.  Couple this with their inherent love of people and you have the perfect pet.

I’m going to finish this list with a cat surrounded with legend, the Birman.  Not to be confused with the unrelated “Burmese”, the Birman is a cat of uncertain origins.  Countless legends suggest different originations.  My personal favorite is that these cats were kept as companions by the temple priests of northern Burma and were only given to outsiders as a reward for defending a temple.  The breed came to France where it was almost wiped out during World War II.  By the end of the war, only two cats remained.  Fortunately, the breed has been rebuilt and today these cats make a wonderful pet.

I’ve based this article on the Cat Fanciers’ Association’s list of most popular cat breeds for 2010.  I mention this, because the CFA does not include hybrids as legitimate breeds, which explains why cats such as Bengals and Savannah’s (another two of my absolute favorites) were not included on this list of pets.  That said, I’ve gone ahead and included a few photos of them, because—well, it’s my article.  Enjoy! 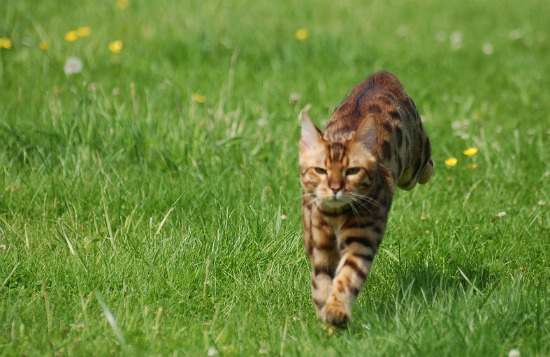