The name Blackwater sounds scary enough without mentioning the death squads. Blackwater, which has now been renamed Xe Services LLC, is a U.S. private security firm based in North Carolina. It was one of the security firms engaged after the U.S. invasion of Afghanistan.  Initially, it also provided training support to law enforcement and military organizations.  The company played an important role during Iraq War, training the police and new army, guarding officials and providing a host of support services to occupation forces; earning over a billion dollars in government contracts.

The connection between Blackwater and CIA goes back a long way.  There have been several senior CIA officers that have worked with this company.  One of them, Ric Prado, who was the chief of Counterterrorism Center, is said to have run the death squad program.

In 2004 the CIA approached Blackwater for reviving its secret death squad operation, which involved capturing and assassinating terrorists. 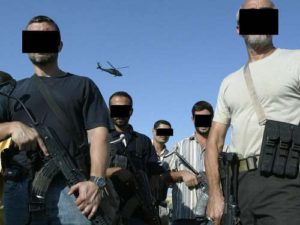 It is said that Blackwater was capable of undertaking these jobs and offered its services of tracking terrorists, as it had contacts in almost all the “sensitive” regions of the world, such as lawless regions or where the CIA does not have relations with the government.

The death squad program was brought out into the open recently by Leon Panetta, the newly appointed CIA director.  Panetta terminated this program in June and informed the Congress of its existence.  It is said that millions of dollars went into the planning and training of the members of the squad.

The duration of the operation was eight years and during this span of time, it underwent transformation in the hands of different CIA directors. This was initially started by George Tenet, a CIA director during the Bush administration, but it was later canceled as it was felt to be too risky.  It was later revived by Porter Goss, who came after Tenet in 2004.  In 2006, the then CIA director Michael Hayden, converted the program to “intelligence gathering only.”  The program finally died in June, in the hands of the current director, Leon Panetta, who also made it public.

With the news now becoming public knowledge, there have been concerns expressed from different quarters.  Many find it highly inappropriate for the CIA to assign a sensitive task of this nature to Blackwater, which has earned the confidence of the government by taking care of the training and security in regions like Iraq and Afghanistan.

Ever since the emergency briefing by Panetta, there has been a lot of information floating around and it is said that a dozen people were hired to be part of the death squad, and these people were not told by the company that they were working on the project for the CIA.

Although, the plan was revived under Goss in 2004, it was given birth as early as 2001, after the September 11 attacks. CIA sources reveal that they wanted to find an alternative to air strikes, which were potentially dangerous for civilians.

Whatever the reason for choosing Blackwater, rumors abound that it was not the only company hired to capture or kill terrorists.

Early this year, the U.S. State Department has put its foot down and informed Blackwater that the contract in Iraq will not be renewed.  A spokesman for the State Department said, “The department notified Blackwater in writing on January 29 that we do not plan to renew the company’s existing contract for protective security details in Iraq.”  This move comes in the light of Iraq denying a license to Blackwater.  However, Blackwater will continue its services to the U.S. government in the rest of the world.

The House Intelligence Committee is in the process of investigating whether CIA is at fault and has done something illegal in not letting the Congress in on the secret death squad program.

With so many reports doing the rounds, many believe that the complete story is not out yet.  They wonder why CIA had to keep this from the Congress, when the US military has openly tried to catch Osama bin Laden and others “deal or alive,” immediately after the 9/11 tragedy.  We will just have to wait and see how things unfold.