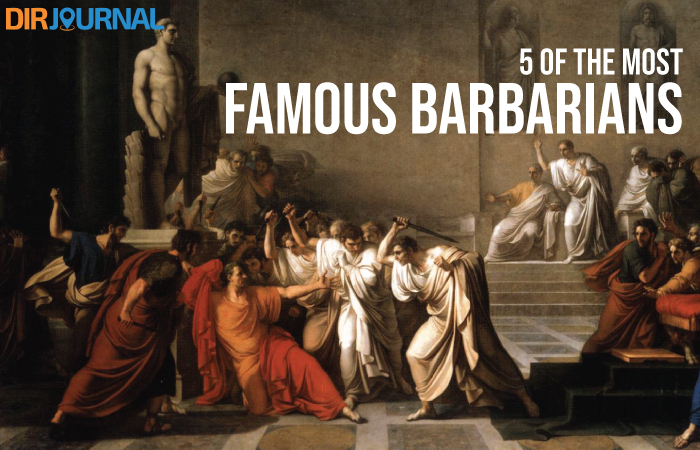 5 of the Most Famous Barbarians

1 commentJune 12, 20137 min readby cocles
Share:FacebookTwitterRedditPinterestLinkedInWhatsApp
The western world would not exist as we know if it weren’t for the barbarians.  Nor, would Christianity.  Obviously the most famous barbarian is Conan the Cimmerian.  But what is a barbarian?  Put simply, it’s a savage, an individual who lives outside of what is considered “civilized” society.  To the ancient Greeks, even Persians were considered barbarians.  To the Romans, barbarians were the Celts, Gauls, and the ancient Germanic peoples.  And as you can guess, throughout history there have been many important barbarians from these groups, among others.

Before Julius Caesar was famous for being the first Emperor of Rome, he was famous for conquering Gaul (modern France).  Vercingetorix was the Gallic king who Caesar defeated to make that happen.  Vercingetorix was a young barbarian noble who managed to raise an army, be declared King, and unite several tribes into a Gallic force that could take on the Romans.  After several victories and one especially costly one, Vercingetorix retreated to the stronghold of Alesia.

Julius Caesar pursued and put the stronghold under siege, building a wall around it to keep the Gauls inside contained.  With Vercingetorix’s allies on their way to rescue their king, Caesar built another wall behind him to protect his forces from the incoming Gauls.  In other words, Caesar’s fortifications were shaped like a donut with Alesia in the center.

The Gaul’s arrived but could not save their King, and after the final battle, Vercingetorix surrendered.  This defeat was the decisive battle that ultimately gave the rest of Gaul to Rome.  Caesar would use the prestige of this victory to become Emperor.

By the time around 400AD, the Roman Empire had overextended itself.  Unable to muster enough military forces to protect its territories, the Romans began hiring Germanic mercenaries.  Among those mercenaries was a gifted Visigoth commander named Alaric.  As perhaps can be expected, the Romans treated their foreign mercenaries as second-hand citizens.

Having had enough of this treatment, the Visigoth’s declared Alaric their King and went on the warpath.  After devastating Greece and enslaving Sparta, Alaric set his sites on Rome itself.  Alaric would lay siege to the city of Rome three times.  The first time he showed up, the Romans bribed him with a King’s fortune to go away.  The second time he showed up, he forced the Romans to establish a second rival Emperor.

It was the third time he showed up though that Rome was in trouble.  Rome’s greatest defender, General Stilicho, the only man Alaric feared, had been killed by his own people over politics.  Alaric stormed the city, the gates were opened, and for the first time in 800 years a barbarian horde ransacked the city of Rome.

Another barbarian who threatened the city of Rome itself was Attila the Hun.  He came to power right as the Roman Empire was falling apart… and he knew it.  Rome was weak and Attila had his own Hunnic Empire at his disposal.  So Attila did what any hot bloodied barbarian warlord would do… he invaded the Roman Empire.

First, he tried to take Constantinople (modern Istanbul), then he turned around and tried to take Roman Gaul (modern France).  He was defeated more than once, but it didn’t matter.  Attila would simply regroup and try again later.  Among these invasions, Attila would be responsible for one of the greatest shifts in the western world.  When Attila attempted to invade Italy, it was not the Roman Emperor who traveled north and convinced Attila to turn around; it was Rome’s Bishop.

Today we know the Bishop of Rome by a different title: Pope.  When the Bishop saved Rome, it was the beginning of the shift of power from the Roman Emperor to the head of the Christian Church.  The effect this would have on our world would be immeasurable.

In Asia, the Mongols were largely considered the equivalent of “barbarians” by the more “civilized” people in the area.  The greatest leader of those Mongols, was without question, Genghis Khan.  Uniting many of the Asian nomadic tribes, Genghis established the “Mongol Empire” and was declared the Great Khan of his people.  Genghis Khan would then go on to invade and conquer most of the Eurasian continent.  The only thing saving western Europe was its distance from where Genghis Khan started.

There seems to be a perception today that it has historically been the west, the Crusaders, who stormed into other civilizations to conquer and convert.  Hogwash.  As far back as the 300 Spartans at Thermopylae, the Islamic world has done all it could to conquer Europe.  And let us not forget why Constantinople is now known as Istanbul.  In 732, however, the Islamic Empire came closest to taking Europe, and if they had the world would be a much different place.

Having taken North Africa, a vast army of Muslim Moors crossed Gibraltar into Hispania (modern Spain). Conquering Hispania with little effort the Moors headed north into Frankish territory (modern France).  The Roman Empire was long gone and Europe was but a collection of smaller barbaric kingdoms.  But among those so-called barbarians, a great Frankish military leader had risen, Charles Martel, “The Hammer”.

The Moors stormed into the Frankish territory to find Martel waiting for them with an army of Franks who had unified under his banner.  The Moorish cavalry charged the Frankish infantry.  Despite the Moorish advantage with their horses the Moors found the Franks to be, a “sea that cannot be moved.”  While desperately trying to break through, the Moors received word that their base camp was under attack by Frankish scouts.  As various Moors turned to save their camp, other Moors thought they were witnessing a full-scale retreat and fled only to be cut down by the now pursuing Franks.

The leader of the Moors, trying to stop the retreat, found himself surrounded and was killed.  By the next morning, the Moors had fled back to Hispania.  Had Charles Martel failed, it is more than possible that the Islamic Empire would have taken Europe.  Christianity would have quite possibly ceased to exist and the entire western world would now practice Islam. As far as Charles Martel goes, you may have heard of his grandson… Charlemagne.

As we can see, while barbarians might be considered savages by some, they are responsible for shaping much of what we see now as the “western world”.  When the Roman Empire fell, it was the barbarians who filled the void and built a new world.

Do you have a favorite barbarian? Tell us in the comments below!