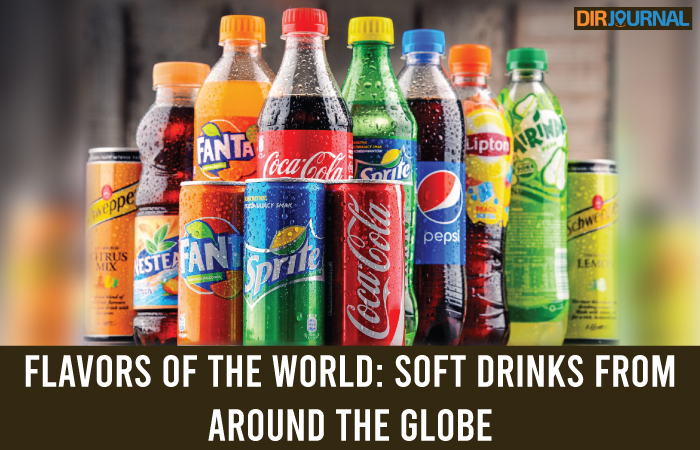 Flavors of the World: Soft Drinks from Around the Globe

Imagine being in Japan and ordering a soft drink that tastes like cucumber or salad. These are real soft drinks currently on the market which are produced by Pepsi and Coca-Cola. Often different countries around the world feature soft drinks that are flavored with ingredients that are common in their country. What exactly is the definition of a soft drink? It is a beverage consisting of three characteristics including: flavored, non-alcoholic and carbonated. Let’s take a trip around the world and explore soft drinks in seven different countries.

Home to the Great Barrier Reef, the outback, kangaroos and koalas, Australia has some very interesting soft drinks as well. Passiona, a brand manufactured by Schweppes Australia, has been around since the 1920’s. It began as a passion fruit cordial made from passion pulp. A company purchased the cordial and decided to carbonate it thus creating Passiona. Another soft drink Schweppes Australia produces is Solo, which is a lightly fizzy, tangy, lemon drink. It is similar to a lemony beverage referred to in Australia as pub squash. Coca-Cola also offers its own version of the lemony drink in Australian and calls it Lift. Kirks is another popular brand of soft drink in Australia that originated in 1865. There are very unique Kirks flavors including: Creaming Soda, Big Sarsinger Beer, Lemon Squash, Pasito and many others. Kirks is manufactured by Coca-Cola Amatil.

Known for the samba, Carnival and the Amazon, Brazil is home to Guarana soft drinks. Guarana is considered a creeping shrub that can be found in the Amazon region of Brazil. It produces little, bright-red fruit that are filled with black seeds. It has naturally high caffeine content. There are a variety of Guarana soft drink products such as Guarana Antarctica , Guarana Kuat and Guarana Jesus. Currently Guarana Antarctica is the most popular variety of the drink and is produced by AmBev. Both Guarana Kuat and Guarana Jesus have been purchased by Coca-Cola. Another famous manufacturer of beverages in Brazil is Primo Schincariol. This company produces Guarana Schin and itubaina (which has a tutti-frutti flavor) among other soft drinks.

Finland is the land of the midnight sun and Nokia. They also seem to offer every flavor of lemonade you can imagine. Hartwall is a Finnish company that manufactures a variety of different soft drinks. Jaffa is one of their popular soft drinks that began being manufactured in 1949. It has a fruity orange flavor created from real fruit. Pommac is another mixed fruit soft drink produced by Hartwall. It is comprised of real berries and fruit, and its concentrate is matured for three months in oak barrels. As previously stated, lemonade is very popular in Finland. Hartwall also produces a brand known as Limonadi which is available in three flavors including: Raspberry, Apple and Pear.

Germany gave the world Beethoven, Bach and many types of beer. They also created soft drinks that consist of half orange lemonade or orange soda, and half cola. The original product was called Spezi. Coca-Cola founded a version of the drink and named it Mezzo Mix. It is Coke with a slight orange flavor added to it. The name actually translates to “Cola Kisses Orange.” There is also a low-calorie version called Mezzo Mix Zero. Another popular German soft drink is Afri-Cola which was first created in 1931. It is basically mineral water sweetened with real sugar. It is known to have a very refreshing taste. It is currently produced by Mineralbrunner Uberkingen-Teinach AG. The German company also produces Bluna which is a German soft drink that is available in four flavors including: orange (the original flavor), lime, lemon and mandarin orange.

Home to Mount Fuji, manga and samurai, Japan is always on the cutting edge of new ideas. As previously mentioned, Pepsi launched Pepsi Ice Cucumber in Japan. It is mint green in color with a flavor that resembles fresh cucumber. Water Salad is a popular Coca-Cola product only available in Japan with six different flavors of “salad.” Coca-Cola also produces a brand of soft drinks called Qoo. It is a low-calorie soft drink that is free of preservatives and artificial colors. Qoo is made from pure water and has flavors such as peach, apple and orange. Another interesting soft drink in Japan is Kidsbeer. It tastes like a cola but looks like a beer. This product is produced by a Japanese company called Tomomasu.

Sombreros, cliff divers and the Mayan Ruins are all thoughts that may come to your mind when thinking about Mexico. In 1950, the first national soft drink in Mexico was born. It is called Jarritos, and is available in many flavors. It is comprised of natural sugar with fruit from fruit trees. The flavors include: strawberry, grapefruit, lime, mango and tamarind among others. Tamarind trees produce pods that contain a sticky brown pulp and large seeds. Pepsi produces a soft drink in Mexico called Manzanita Sol, which is an apple soda with a smooth fizz.

When you think of India, you may think of elephants and the Taj Mahal. India also is home to a variety of tasty soft drinks from native manufacturers. A very popular soft drink in India is Frooti, which is the first national mango drink launched in 1985. Mangos are a common fruit in India. It is produced by Parle Agro, which also produces Appy Fizz (a sparkling apple drink) and Grappo Fizz (a sparkling grape drink). Another soft drink manufacturer in India is Maaza. The company is best known for Maaza Mango which contains natural fruit pulp and treated water. Other Maaza flavors include: Maaza Guava, Maaza Apple, and Maaza Pineapple. A newer product is Maaza Bits which is a fruit drink that contains pieces of real fruit.

Trying different soft drinks from around the world can be fun. Why not try Kvass from Russia? Kvass is a fermented beverage that is often created with regular or black rye bread. It can be flavored with raisins, fruit, berries or birch sap. It is considered a non-alcoholic drink in Russia because it typically has less than 1.2 percent alcohol content. Coca-Cola and Pepsi both have their own versions of Kvass.

Ireland has a variety of popular soft drinks such as Jafsun, which is a blackcurrant and apple beverage. Gold Crush (an orange drink) and Sanor (which comes in blackcurrant, lime, raspberry, peppermint and orange) are two other beverages you can find in Ireland.

Clearly there are many other soft drink flavors in the world than merely cola and lemon-lime. Some may not sound appealing to you, but you never know unless you try them. Their flavors may just surprise you. With the use of the internet, you can often purchase these soft drinks from far away countries so you can try them. The following links will provide you with more information on the mentioned soft drinks and the companies that produce them.