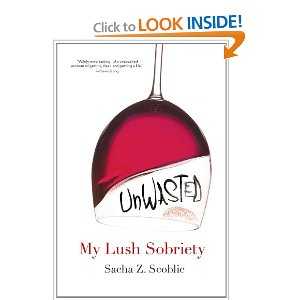 Frank Miller’s The Dark Knight Returns played a major part in introducing mature themes to mainstream comic books. Trust me, comics needed that. Up to this point comics mostly focused on silly ideas such as needle-spitting cacti and Green Arrow’s sidekick becoming addicted to heroin. With this graphic novel however, comics finally became bold enough to explore the really challenging issues (which reminds me — stay tuned this week for a very poignant story about Sinestro’s love of yellow leading him to water sports).

Now that comic books have become a respectable format for dramatic storytelling, it’s only natural that we do the same to picture books. After all a picture book is sort of like a comic book for young readers. By using them to communicate important issues, we’ll be able to teach our children about the violence, crime, and weird fetishes they need to know about. After all, how can you truly love someone if you don’t eat their poop?

I figure it won’t be long until we’ll see mature re-imaginings of our favorite picture books. To that end, I’ve gone ahead and rewritten bits from three classic picture books to give you an idea of what to expect. Feel free to read this with your children, and be prepared to use props to explain concepts they may not understand like “pimp” and “Myspace angle”. 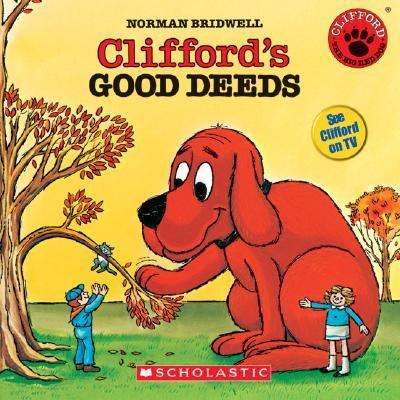 It’s been happening for a while now. Major criminals in the underworld are suddenly found dead, buried underneath a pile of shit so big that even Aunt Myrtle would have second thoughts about chowing down. Someone, something, was cleaning up the city.

What though? Emily Elizabeth had no clue — and at four in the morning, she was too shit-faced to care. She was driving to the scene of the crime when she realized she had brought last night’s date with her — a now empty bottle of Jack Daniel’s, laid to bare on the passenger seat. She gave it a glance, a “what-the-fuck-are-you-looking-at” kind of glance, and pulled a fresh toothpick out of her shirt pocket. Trying to quit smokes was hell on high water, but with the patch and the wood she’d live to tell the tale. She spat the old ‘pick over at the bottle and slid the new one between her teeth.

She saw Charley standing by the pile even as she parked. Only the street lamps and whirling red-and-blue of the fuzz’s cars lit him up. Otherwise, he was so black that she’d lose him in a licorice factory. “Hey,” Emily Elizabeth said as she walked up to the latest victim. “When did they find him?”

“Every old lady on the block who smelled shit all at the same time.” Charley took a bite out of his massive beef sandwich. Even now, the asshole was eating something greasy. “Looks like our vigilante has struck again.”

“He’s a fuckin’ criminal,” Emily Elizabeth said. “When I catch him I’ll let him know that you don’t shit on people in my city. Not until you’ve been paid by the manager.” She pinched the toothpick with two fingers and looked at the sandwich again. “How the hell can you eat and look at that thing at the same time? It’s disgusting.”

“Jake should’ve figured that he wasn’t playing fuckin’ Nerf tag,” Charley said. “That was war. All my life I’ve been at war and I never had a chance to rest. Jake did. And look what happened to him.”

“Best toy store in the city,” Emily Elizabeth said. “I buy doll clothes from him all the time.”

“Yeah.” Another sloppy bite. “In any case, it looks like the mayor’s gettin’ some help to clean up this city once and for all.”

“If you’re gonna fight crime,” Emily Elizabeth said, “do it the right way. Kill ’em, burn ’em, stick ’em in an ice box, and ship it to Alaska where you paid a bunch of Eskimos to throw harpoons at him until he falls into a pool full of rare Alaska tiger sharks. This? This is too far.”

Charley finished his wrapper and bundled it up, sliding it into his pocket to throw away later. “So what do you want to do?”

“Does he like to fetch the frisbee?” Charley asked.

“That and a side of bacon.” Emily Elizabeth signed off with two fingers and a little salute. “I’ll see you later with whatever I can find. I need some sleep; I gotta get to school in a few hours.”

Emily Elizabeth stopped walking away for a moment, looked over her shoulder at him. “Fractions. God damn fractions.” 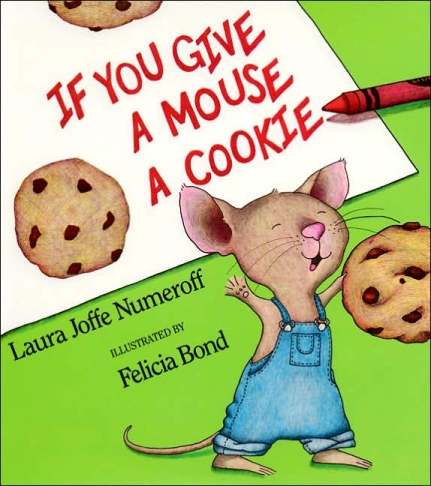 If you give a mouse a cookie, he’s gonna want something to wash it down. You figure he wants milk, but no, he doesn’t want that — he wants the bourbon in your cabinet. At this point you’re not reading too much into it. He’s just a mouse and you figure he’ll do something funny like on Tom and Jerry. You hate cats and want them to die so you think this is the hookup if he gets what he wants. You give him the shot.

He washes it down and takes a big look around, and then he says that he wants your kitchen. You’d like to give it to him, sure, but you can’t. It’s a kitchen. It’s a part of your house, part of the whole housing package. If you give it away the old maid would never stop bitching about it. Not like it wouldn’t be a change from her current bitching though. The bitching would just jump circuits — Channel 3 local news bitching to Channel 60 big breaking news bitching. You have to admit it’d add variety.

But you need the kitchen. You tell him that — sorry, he can’t have the kitchen. He figures okay, it’s cool. Kitchens aren’t exactly free, so fair enough. So instead he asks to borrow a knife. God only knows why he wants a knife, but you figure you need to keep making him happy. Maybe it’s to slice that cat in half, and both pieces will flop apart like rubber. That’d be really funny right now.

So you give him the knife, and when he holds it against your neck you realize that something isn’t quite right. You ask him what’s wrong, and he says that he’s going to get what he deserves; that mice have to scavenge whatever they can unlike humans who can get all the big, human-sized food and things they want because they’re the only ones who know where money grows. You say that money doesn’t work like that. He says that money knows when to shut up, and he smacks you.

Then he says that he’s had enough handouts from people with cookies, and that he’s going to take matters into his own hands. He says that he’s going to kill you and take your place so he can enjoy what you have. You tell him that he’s a mouse and everyone would notice. He says that he’d keep your body around, but he’d just control it from a distance. Maybe with some kind of pulley system or something, he hasn’t really thought it out that much, but after he’s killed you then he’d have a brainstorm session.

Now while he’s distracted you see your chance. You hit the knife away and wrestle the mouse for the fate of the kitchen. This takes about six seconds before you kill him with a body slam, because he’s a mouse and you’re like ten million mouses overweight compared to him.

Now he’s dead and you’ve got blood all over your shirt, and it’s going to be very hard to explain this to the old maid when she gets home. Then again, it’s hard to talk to her at all before she starts bitching about everything under the sun. That’s why the sun sets, you know. To get away from all the bitching. He and the moon take shifts so someone can get some relief.

So that’s the lesson here. Don’t give mice cookies. Or knives — you probably shouldn’t give them knives either. That’s a high entry on the list of things you shouldn’t do. 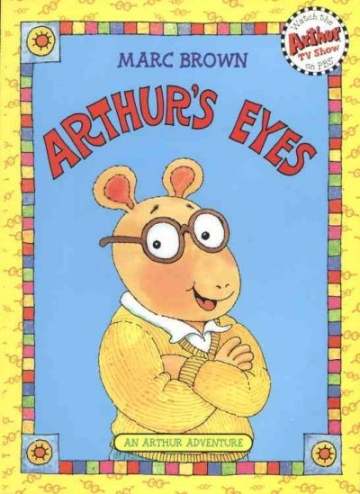 Arthur looked up. It was Buster. Arthur pulled aside the bagged bottle of whiskey, and Buster sat down on the now empty park bench space.

They watched the children swing.

“Haven’t seen you around in a while,” Buster finally said. “Anything wrong?”

“Everything’s wrong,” Arthur said. “Ever since I got them, everything’s gone wrong.”

“Bullshit.” Arthur took a swig. “Everyone hates them. Ever since I got them I’ve been getting shit from everyone. Everyone’s calling me names like ‘four-eyes,’ saying things like ‘Why isn’t your nose as big as other aardvarks?'”

“Even Madame Bitch herself.”

“Why don’t you just ignore them?”

“Buster, we’re in the fucking third grade,” Arthur snapped. “I can’t just blow them off.”

“You’re right. I’m sorry. I forgot how serious this is.”

Arthur buried his face in his hands. “I don’t know what to do, man. I can’t go back. Not if they’re gonna be there.”

Buster rested a hand on Arthur’s shoulder. “You gotta face them soon. We’re having pizza and milkshakes on Thursday. You can’t miss that.”

“You have to be,” Buster said. “Ever since your sister passed away, you have to be the one to carry the Read name. You can’t do that if you’re weak.”

“If only I told her what rabies were before she rode that pony,” Arthur muttered. “If only I shot that damn pony. She would’ve gotten over it. I could’ve just shown her lolcats. They’re just as cute.”

Children slid down the slide, and they both wanted to join them. They couldn’t. That was a baby ride. And, if anything, they weren’t babies anymore.

“I’ll do it,” Arthur finally said. He stood, took one last drink, and tossed the bottle into the nearby recycling bin. “I’ll do it, but you have to help me out. I won’t do it alone.”

“Thanks,” Arthur said. Buster stood and they briefly embraced. “Come on. Let’s go work on our book. I want to write a scene where a ninja flies in on a dragon and burns a village of evil peasants.”

“And all the peasants are wearing glasses.”

“Whatever you want, buddy.”