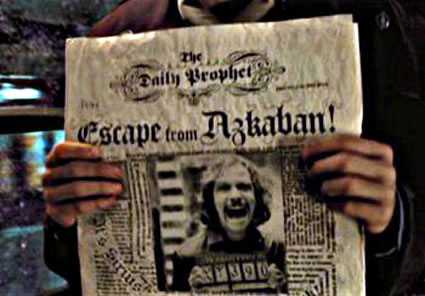 Never has the magazine and newspaper industry been faced with greater uncertainty and turbulence than today.  There are many that believe that the very notion of magazines and newspapers is undergoing a profound transformation, if not under threat.

While most of the print media barons are concerned about the future of their businesses, there are some that are rising to the challenge.  As usual, it is technology that is at the center of it all.  Every time a new technological wave washes over, we hear assumptions from various quarters that everything from before will be swept away.  But will that happen this time around, with the moving and talking picture magazines?

What if you were to experience something like that? Taking media innovation to a new level, where you’d least expect

to find it, you will soon have a weekly that contains moving and talking pictures.

A print edition of Entertainment Weekly is bringing out ads for the US television network CBS Corp. and PepsiCo Inc.  A video player is being embedded in the magazine for running ads for CBS shows and Pepsi that is funding this unique promotion.  Readers can now see a first of its kind VIP (video in print) advertisement published in a traditional magazine.

This ad comes in a heavy paper package that resembles the novelty audio greeting cards that give out music and other sounds. As the page is flipped open, the video plays automatically on a two-inch screen (mobile phone screen size) with a resolution of 320×240, and it conceals a larger circuit board below.  Mini speakers for the sound are embedded below it.  This is powered by rechargeable batteries that can be recharged using a USB, and last 70 minutes.

The chip technology used for storing the video is similar to the one used in singing greeting cards and it is activated when the page is turned.  Up to 40 minutes of video can be stored by each chip. This video player insert is created by Americhip Inc, a Los Angeles based company, and is strong enough to go through the binding process and mail delivery.

According to CBS Corp and Time Warner Inc’s Entertainment Weekly, something like this has never been tried before and this video advertisement has the distinction of being the first to appear in a print magazine.

Through this ad, CBS will be promoting its new season of TV series launching in the autumn, according to George Schweitzer, its marketing chief.  The shows include the Two and a Half Men and the Big Bang Theory. They will be targeting readers in New York and Los Angeles.

Although, we don’t really know how much CBS is paying Entertainment Weekly for this novel promotion, it is obvious that the magazine is looking to earn big with this form of advertising, which could have much more potential of catching the reader’s eye than other existing forms of advertising.

There is also no indication of how many videoscreens are going to be used by CBS as part of this promotion, except that the figure is going to be somewhere in the “thousands.” An industry source familiar with these devices estimates that it would cost several dollars per videoscreen, as it has to be manually inserted into the magazine, running into thousands of dollars in revenue for the magazine.

With the debate over the “demise of print media” heating up, this is a hot and open topic of discussion, and the print media can no longer be content lingering in a state of denial. The media is realizing and seriously contemplating the importance of completely re-inventing themselves and the sudden explosion of moving picture technology is expected to revolutionize magazine advertisement.

Although, this is not the work of one of Rowling’s wizards, we do have an intriguing piece of magic on our hands.