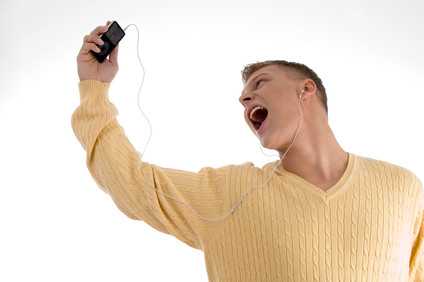 Remote Control Your iPod With A Wink! Japan Gets Eye-Pods

Next time you are in Japan, do not get carried away if you catch someone
winking at you. The poor guy could only be operating his iPod.

A group of researchers from Japan have come up with a system that makes us humans lazier than we are already. There is no need to use the hands anymore to use an iPod. Soon, people will be able to operate their iPods with the flick of an eye.

The lead researcher, Kazuhiro Taniguchi from Osaka University’s Graduate School of Engineering Science, says the system they are developing comprises of a single chip computer and two infrared sensors and works by monitoring the movement of the temple. The most amazing thing about this is that it is very tiny and can be fixed into the sides of the eyeglasses or headphones.

What do we do to run the iPod? Close our eyes for a second and this starts the iPod and blinking again stops it. Winking one eye reverses and winking the other one skips to the next tune. Close both eyes to pause or play.

How about those that cannot wink with one of their eyes? Researchers have not left any stone unturned and have come up with a perfect solution for such people. They are programming the system to give commands by blinking twice in fast sequence.

Does that mean that every time we blink, it is going to go off and on? The answer to this from developer Taniguchi is, “You don’t have to worry about the system moving incorrectly as the system picks up signals when you close your eyes firmly. You can use this when you’re eating or chatting.”

He says that this system has the ability to distinguish a natural blink from a deliberate firm blink. “Normally you blink in an energy-saving manner, very quickly and lightly, but you would close your eyes more firmly to operate a device,” he said.

This iPod system or should we say eyepod, has been named the “Kome Kami Switch” or “Temple Switch.”

This wonderful innovative device could fulfill the purpose of a third hand for people such as motorbike drivers, rock-climbers, caregivers and astronauts.

Although, the first impression of this device is that it will make us lazier, if we take into consideration, how useful such a device could prove to be for the disabled, it is indeed a great invention.

This switch will also be capable of operating air conditioners, television sets, lighting and other electronics. Taniguchi hopes that this system would eventually be able to operate wheelchairs, robots and mobile phones.

However, the Kome Kami switch is still in the initial stages of research and will take time to face the world, may be around two years to three years for it to be commercialized. Until then, we have to continue using our hands to play our favorite songs.

Another system that Taniguchi and his team are currently working on is one that relies on teeth clenching.