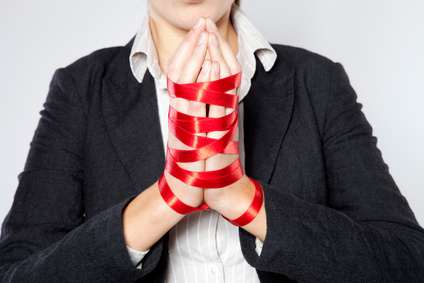 Small business is being suffocated, new businesses can not open, and existing businesses are not hiring – and the reason is NOT higher taxes as politician would have you believe. It is ridiculous licensing, fees, and other red tape.

Licensing and fees are used to protect existing business from competition and raise money to put even more burdens on businesses. The more desperate agencies become to make ends meet, the worse this is all going to get.

“Even with all of the massive economic problems that the United States is facing, if the government would just get off our backs most of us would do okay.  In America today, it is rapidly getting to the point where it is nearly impossible to start or to operate a small business.” ~ Suffocated By Red Tape – 12 Ridiculous Regulations That Are Almost Too Bizarre To Believe ~

What we need to do instead is get rid of most regulations and get government meddling out of everything they specifically should not be involved in – which is almost everything!

It is easy to sell people the idea that licenses make them safer, but the reality is they almost never do. People are either conscientious and competent or they are not. Many incompetent “professionals” are licensed while exceptionally talented others are not. Being able to qualify for a license usually requires filling out a form and paying your money, so that license only means you had money and know how to write (or know someone who does).

Licensing is primarily used to discourage competition and to raise
money to support ever larger numbers of government employees.

Even in disciplines where particular degrees or testing are required, the people involved usually police – or more commonly do NOT police – their members.  Doctors, lawyers, law enforcement – none of these does a good job of weeding out the worst among them – and neither do the licensing requirements.

It is naive to believe these laws, rules, fees and fines protect us.
What they really do is prevent people from making an honest living.

“In Louisiana, it’s illegal to be a florist without a license. A florist. Seriously. They have to take a test and everything.” ~ Ridiculous Licensing ~

This is an example of a license that is totally unnecessary – unless you want to make sure they don’t sell you one of the many house plants that are poisonous. We have to stop believing that life is safe and everyone with a license knows everything that will keep bad things from happening to you.

“#1 An industrious 13 year old boy up in Michigan has had his hot dog stand shut down because of a zoning violation.  The funny thing is that Nathan Duszynski and his parents actually thought that they had jumped through all of the proper licensing and permitting hoops….” ~ 19 Examples Of How Control Freaks Are Killing America With Their Completely Ridiculous Regulations ~

I encourage you to read the control freaks post immediately above, because if you think licensing has gone nuts, you are not going to believe the other examples they give of what is actually happening in the United States today.

If you blog, you need to pay special attention and head off attempts to extort money or you may need a license soon:

#2 The city of Philadelphia now requires all bloggers to purchase a $300 business privilege license. The city even went after one poor woman who had earned only $11 from her blog over the past two years.

#8 In Hazelwood, Missouri it is actually illegal for little girls to sell girl scout cookies in the front yards of their own homes.

~ 12 Ridiculous Government Regulations That Are Almost Too Bizarre To Believe ~

We started down this slippery slope when we agreed to the concept that driving is a privilege rather than an inalienable right. There are many places across America where you must drive because there is no public transportation so getting to a job or a grocery store would be an all day adventure without your own vehicle.

“We hold these truths to be self-evident, that all men are created equal, that they are endowed by their Creator with certain unalienable Rights, that among these are Life, Liberty and the pursuit of Happiness.–That to secure these rights, Governments are instituted among Men, deriving their just powers from the consent of the governed, –That whenever any Form of Government becomes destructive of these ends, it is the Right of the People to alter or to abolish it, and to institute new Government, laying its foundation on such principles and organizing its powers in such form, as to them shall seem most likely to effect their Safety and Happiness.” ~ Declaration of Independence ~

In America today, there is very little that you can actually do without getting some sort of a “license” or a “permit” first. How exactly are we supposed to pursue happiness when we can not move about freely? It was bad enough when we needed a license to drive; now law enforcement across America is demanding our “papers” to walk.

“We like to think that we live in “the land of the free”, but the truth is that our lives and our businesses are actually tightly constrained by millions of rules and regulations. Today there is a “license” for just about every business activity. In fact, in some areas of the country today you need a “degree” and multiple “licenses” before you can even submit an application for permission to start certain businesses. And if you want to actually hire some people for your business, the paperwork nightmare gets far worse. It is a wonder that anyone in America is still willing to start a business from scratch and hire employees. The truth is that the business environment in the United States is now so incredibly toxic that millions of Americans have simply given up and don’t even try to work within the system anymore.” ~ 12 Ridiculous Government Regulations That Are Almost Too Bizarre To Believe ~

Small business is the solution to our economic challenges. Returning to an America  where we controlled our own destinies, grew our own food and owned our own businesses can reverse the damage down by allowing collectivism and corporatism to take over the world.

The same solution will work for every other country, county, city, town or village anywhere in the world. We must walk away from what has been done TO us and create a world where we do not have to rely on the crumbs corporations toss their employees. If they will not pay a living wage their system is not sustainable.

We each have a choice to be part of the problem or part of the solution – for now. The sooner you make a life for yourself outside the crumbling corporate system, the better you will be able to survive the inevitable collapse of the U.S. dollar.

If you have questions or would like to share what you are doing,
your comments are always welcome.

If you provide services to small business, make sure they can find you by being listed in DIRJournal.