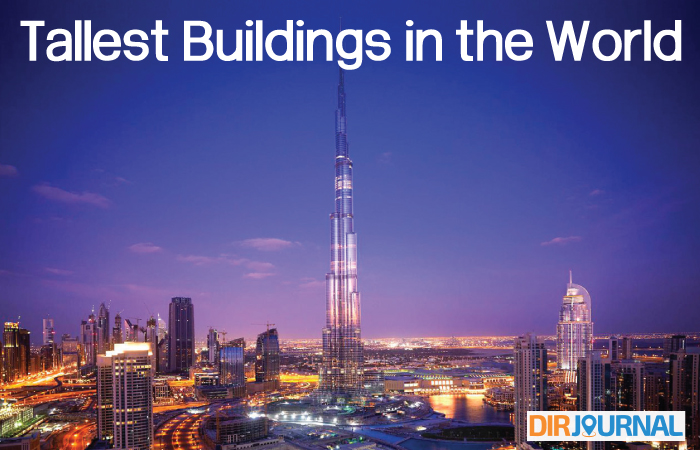 Tallest Buildings in the World

Today we’ll speak about the tallest buildings in the world based on statistics prepared by About.com’s Architecture guide. The buildings from today are really “buildings” not the towers and not just some other tall structures. These are visited daily by thousands of people and not only to look at the scenery. Lots of people work in numerous offices doing their daily job and don’t even pay attention to the magnificent view from above. But for me, all these building are “WOW”! I mean how can one calculate and build a structure that is so high? That’s amazing and that’s so thrilling.

The Tallest Buildings Throughout History

Throughout history, buildings have become taller and taller.  There is a certain prestige in housing the tallest building that countries and cities vie for.  There is also the recognition of architectural accomplishment and challenge that draws people to want to build taller buildings.

In the early days the tallest buildings were always churches and cathedrals.  Some examples that held the title in the past are Old St. Paul’s Cathedral in London, the Lincoln Cathedral, and the Strasbourg Cathedral.  Over time, the spires that added height fell down and new buildings were built.

Churches were the tallest buildings until 1901 when Philadelphia City Hall surpassed the last one.  Before this there were tall office buildings titled “skyscrapers”, but even the tallest one was shorter than the tallest religious building.  Since 1901 the tallest building has always been a secular skyscraper.  In moving from churches to secular buildings, there was a change in materials used as well.  Churches mainly were built with masonry whereas skyscrapers utilized an iron or steel internal structure.

Even now there are more buildings being built that will likely be tallest when they are completed.  Some of these are One World Trade Center, Shanghai Tower, and India Tower.

The Council on Tall Buildings and Urban Habitat

Note that other constructions that are very tall are not included in the list.  The Council on Tall Buildings and Urban Habitat (CTBUH) has defined what is included as a building.  By their definition, a “building” is considered to be a structure that is designed for residential, business, or manufacturing purposes.  Another important point is that a building has to have floors to be considered a building instead of a tower.  Towers are not included in the list of tallest buildings.  There are some buildings that have “Tower” in their name, but they are still technically buildings and not towers.

A building only is added to the list when it meets the proposed structural top, which is covered in the Council’s definition of height.  The height of a building is measured from the sidewalk level of the main entrance to the structural top of the building.  This can include spires.  It does not include antennas.  The building that has the larger number of stories is ranked higher on the list in the case of a tie.  If that does not differentiate the buildings, the one that was completed first gets ranked higher.

As of March 2013, the official top 20 tallest buildings in the world according to this organization are as follows:

This list is always changing as new development occurs. You can find the official current list at any time through the Global Tall Building Database of the CTBUH.

With every new tall building we are getting closer to the sky…and say in several hundreds of years the Earth from the space will look tangled with threads. Here are some photos of some of the world’s tallest buildings, including a new tallest building since our original post. 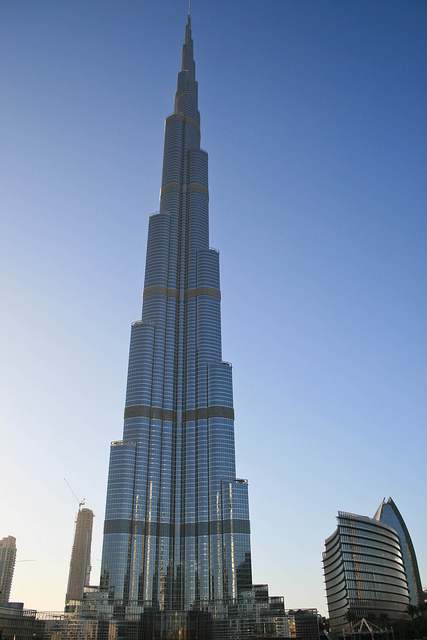 Taipei 101 Tower was the world’s tallest building until recently – if you count its massive 60-foot spire. Its design borrows heavily from Chinese culture. Both the building’s interior and exterior incorporate the Chinese pagoda form and the shape of bamboo flowers. 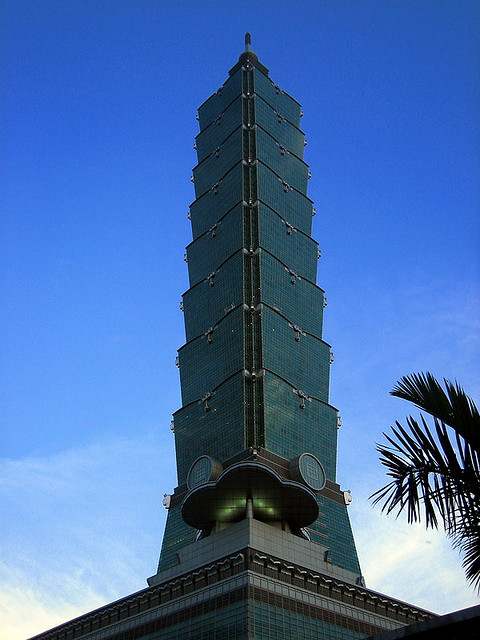 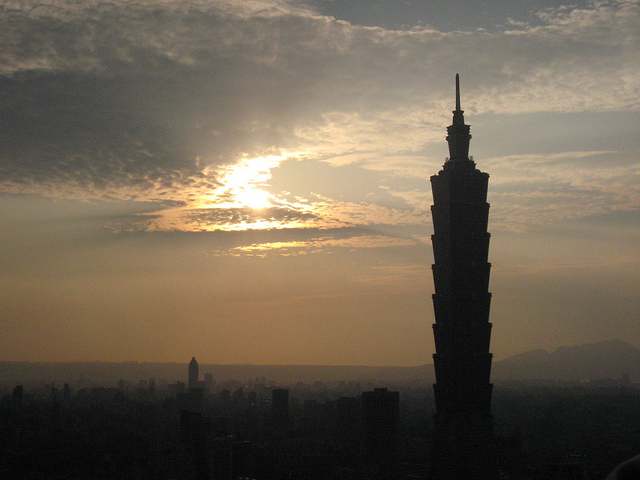 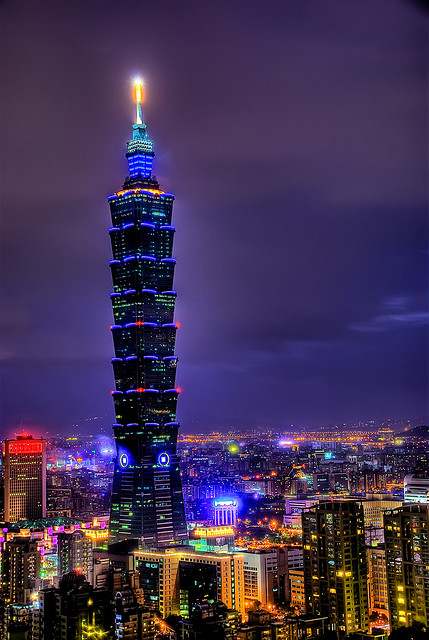 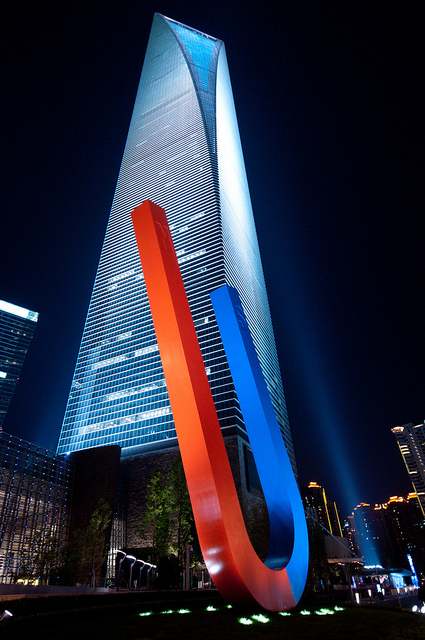 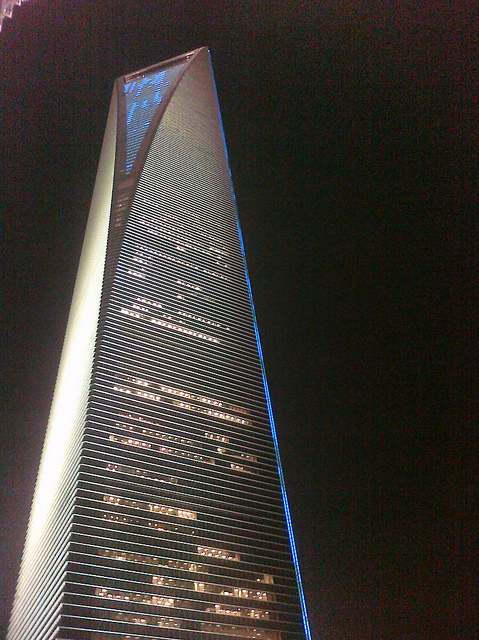 Traditional Islamic design inspired the floor plans for two Petronas towers in Kuala Lumur, Malaysia. Each floor of the 88-story towers is shaped like an 8-pointed star. At the 42nd floor, a flexible bridge connects the two Petronas Towers. 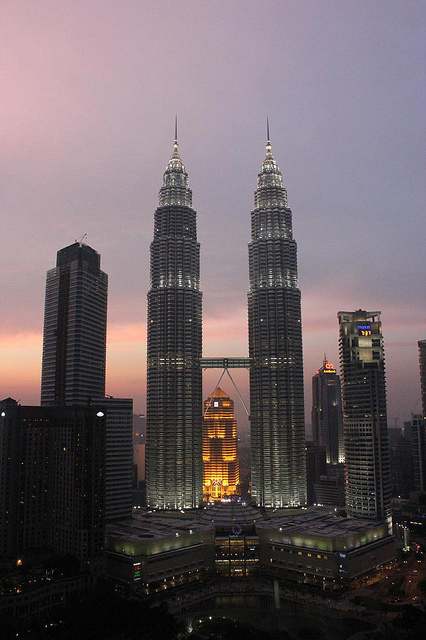 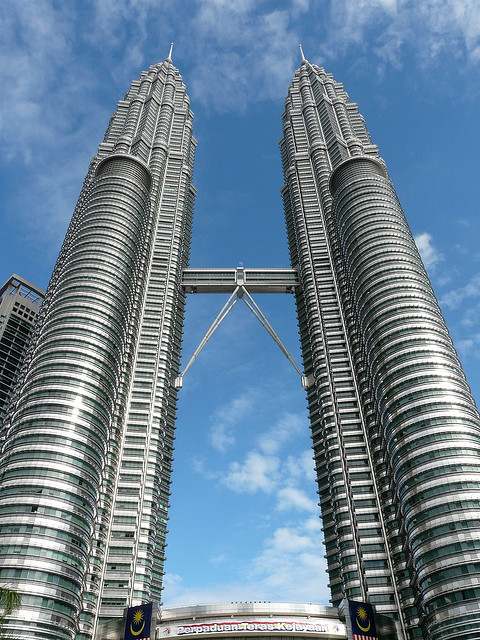 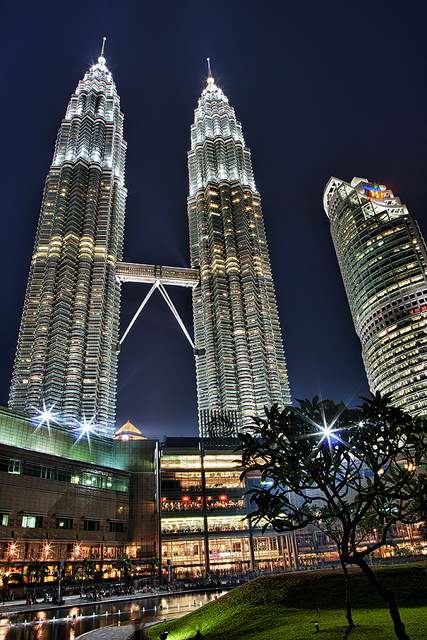 To provide stability against high winds, architect Bruce Graham used a new form of tubular construction for what was then the Sears Tower. Two hundred sets of bundled tubes were laid into the bedrock. Then, 76,000 tons of prefabricated steel in 15-foot by 25-foot sections were put into place. Four derrick cranes moved higher with each floor to lift these steel “Christmas Trees” into position. 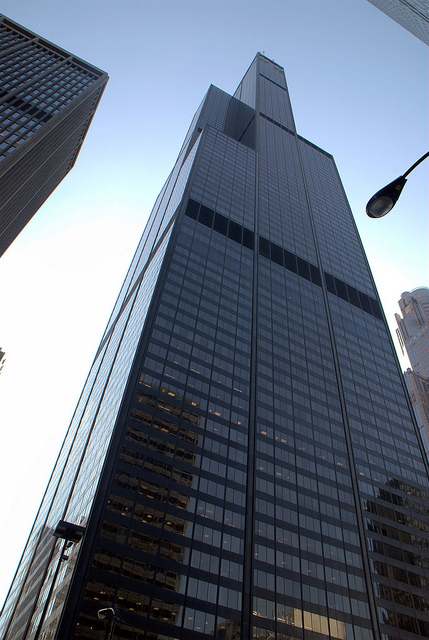 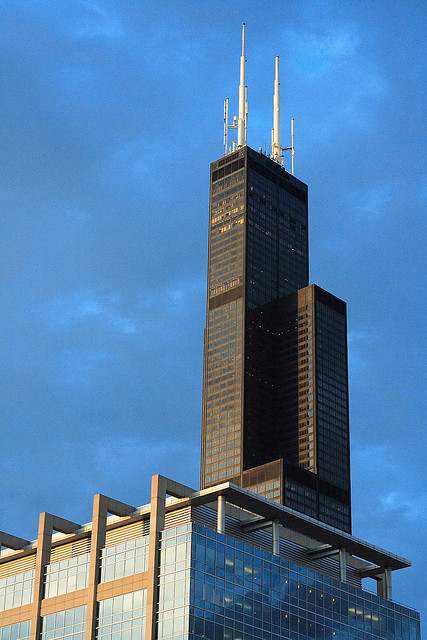 The architects at Skidmore Owings & Merrill designed the Jin Mao Building around the number eight. Shaped like a Chinese pagoda, the Jin Mao Building is divided into segments. The lowest segment has 16 stories, and each succeeding segment is 1/8 smaller than the one below. 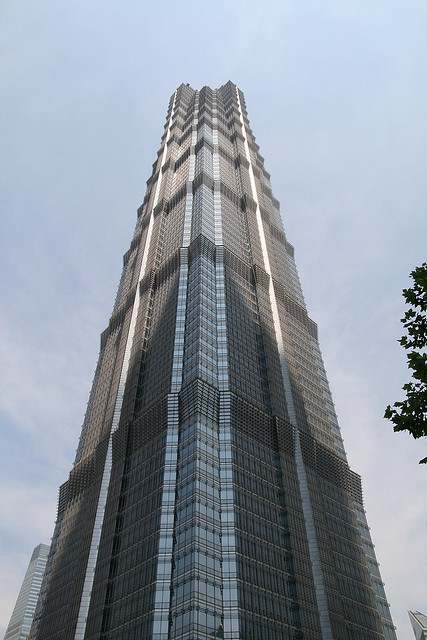 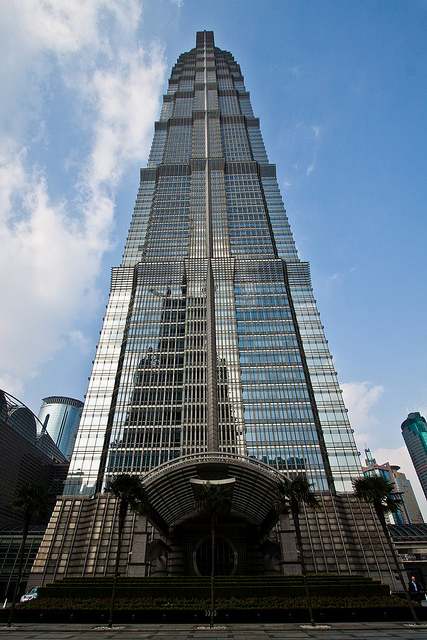 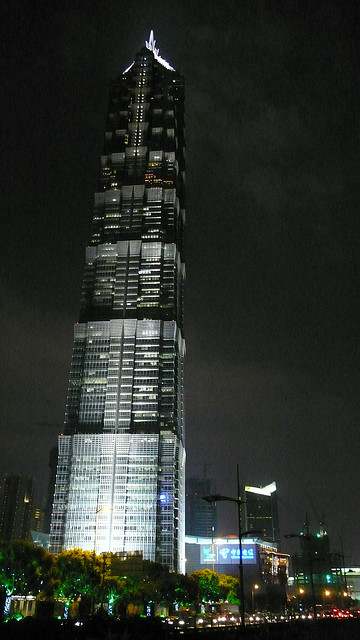 Two IFC is the taller of two International Finance Centre buildings and part of a US$2.8 billion complex that includes a luxury shopping mall, the Four Seasons Hotel, and Hong Kong Station. The complex is located on the north shore of Hong Kong Island. 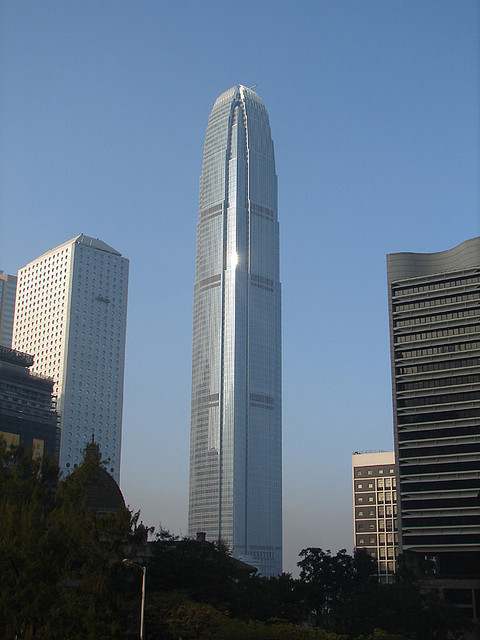 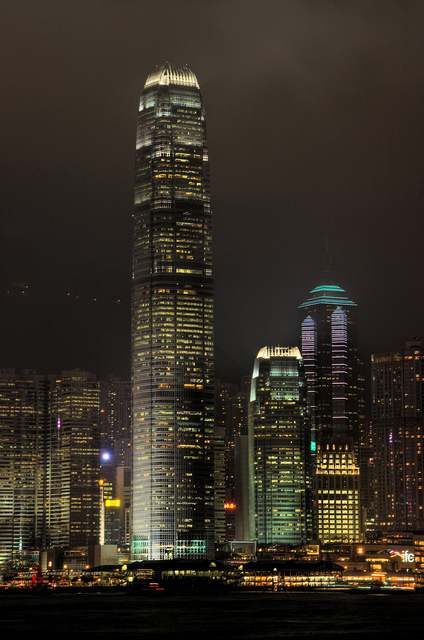 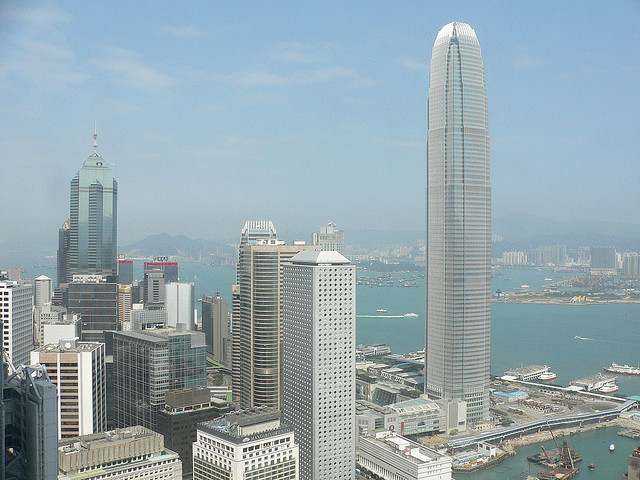 The CITIC office tower in Guangzhou, China is flanked by two 38-story apartment buildings. The CITIC Plaza complex also has a train station, a metro station, and the Tianhe Sports Center. 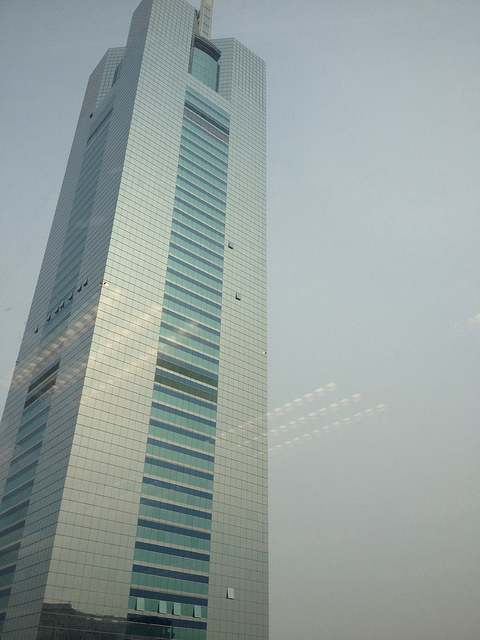 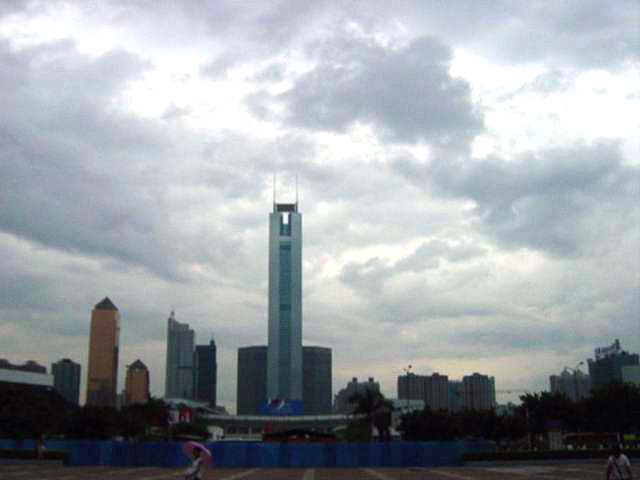 Shun Hing Square is like an entire city in a single building. Shun Hing Square includes a 5-story shopping mall, offices, apartments, and, on the top floor, a public observatory called the Meridian View Center. 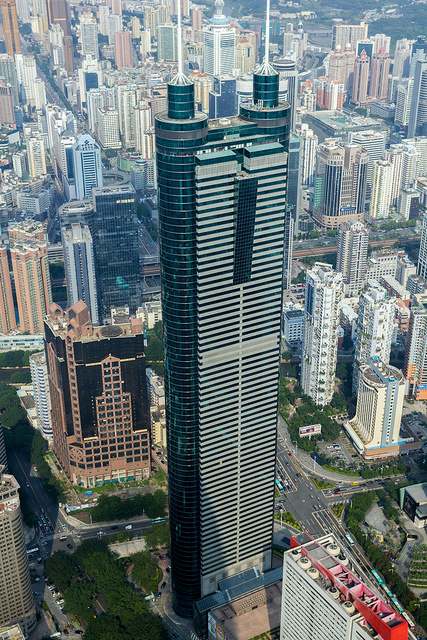 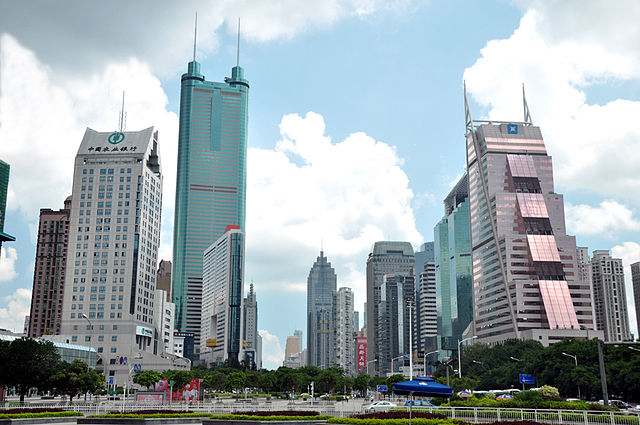 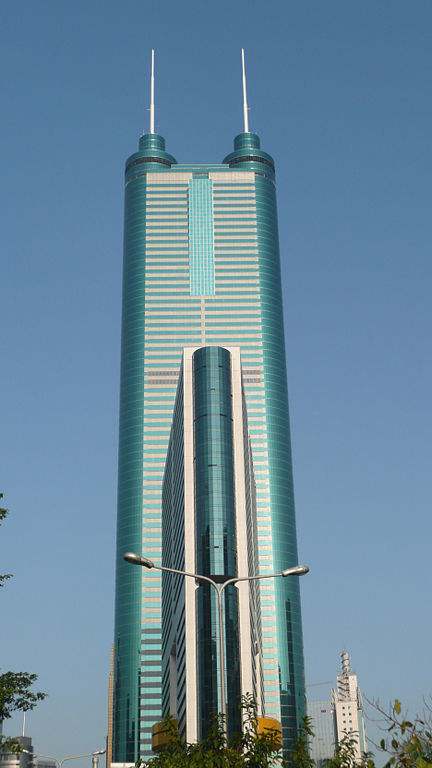 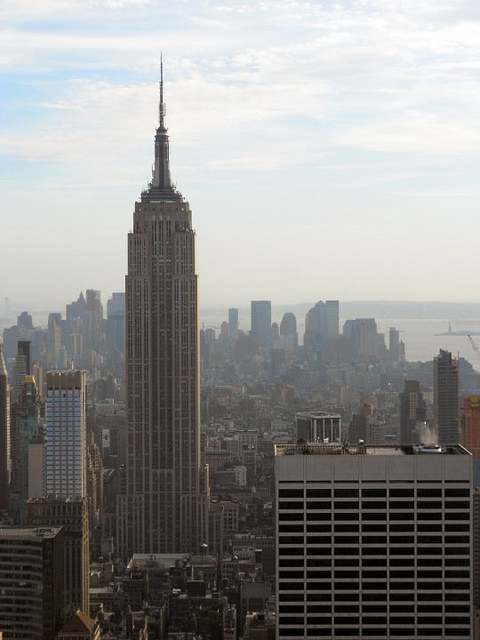 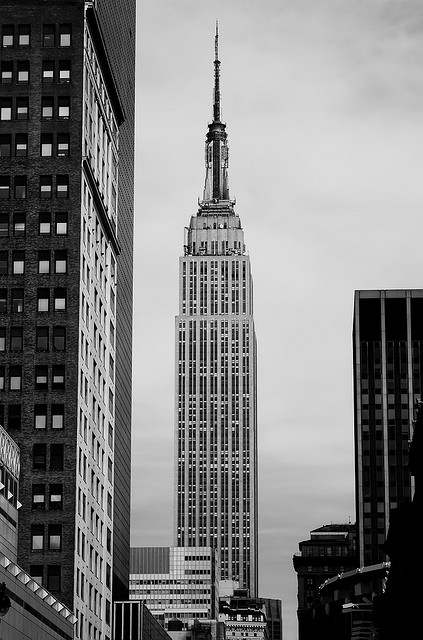 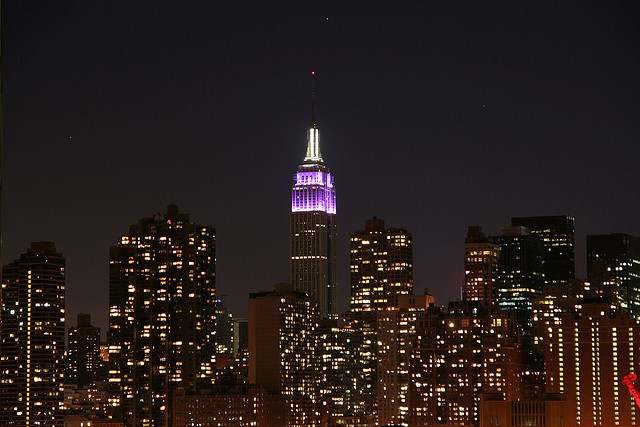 Note: This post was originally published on May 6, 2009. It was updated with new images and update ranking information for the tallest buildings in the world on its currently-listed publication date.