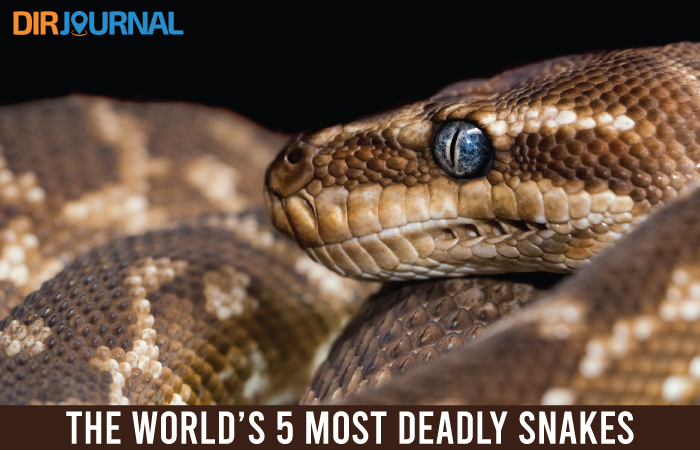 The World’s 5 Most Deadly Snakes

Although there are those amongst us who would extol the virtues of these creatures, to a far greater amount of people, snakes quite simply represent the stuff of nightmares. Whether it is the way that they move or those stark, unblinking eyes, they just seem to represent the absolute definition of everything that is dangerous and should be avoided at all costs.

There are thought to be around 3,000 different species of snake in the world, covering every conceivable weight and size. They range from the recently discovered specimen that is a mere 4 inches long and as thin as a noodle, to the monster that is the green anaconda. These leviathans can grow up to 28 feet (8.5 meters) with a girth of 44 inches (111cm) and weigh upwards of 500 pounds (226 kilograms).

Of the thousands of snakes around the world, less than 15% of them are venomous, meaning that they kill their prey by means of a bite and injecting through their fangs the toxin that they produce

There are many opposing thoughts on what is the most deadly snake, as there are many characteristics to take into consideration, but with that in mind, here are 5 snakes that you would not want to come face to face with. 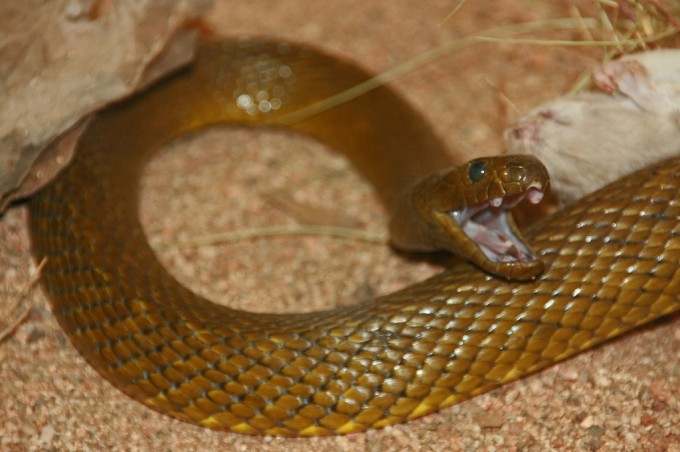 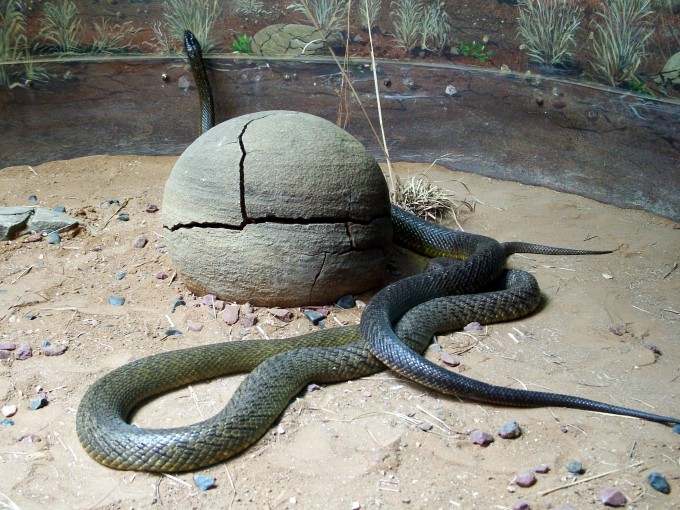 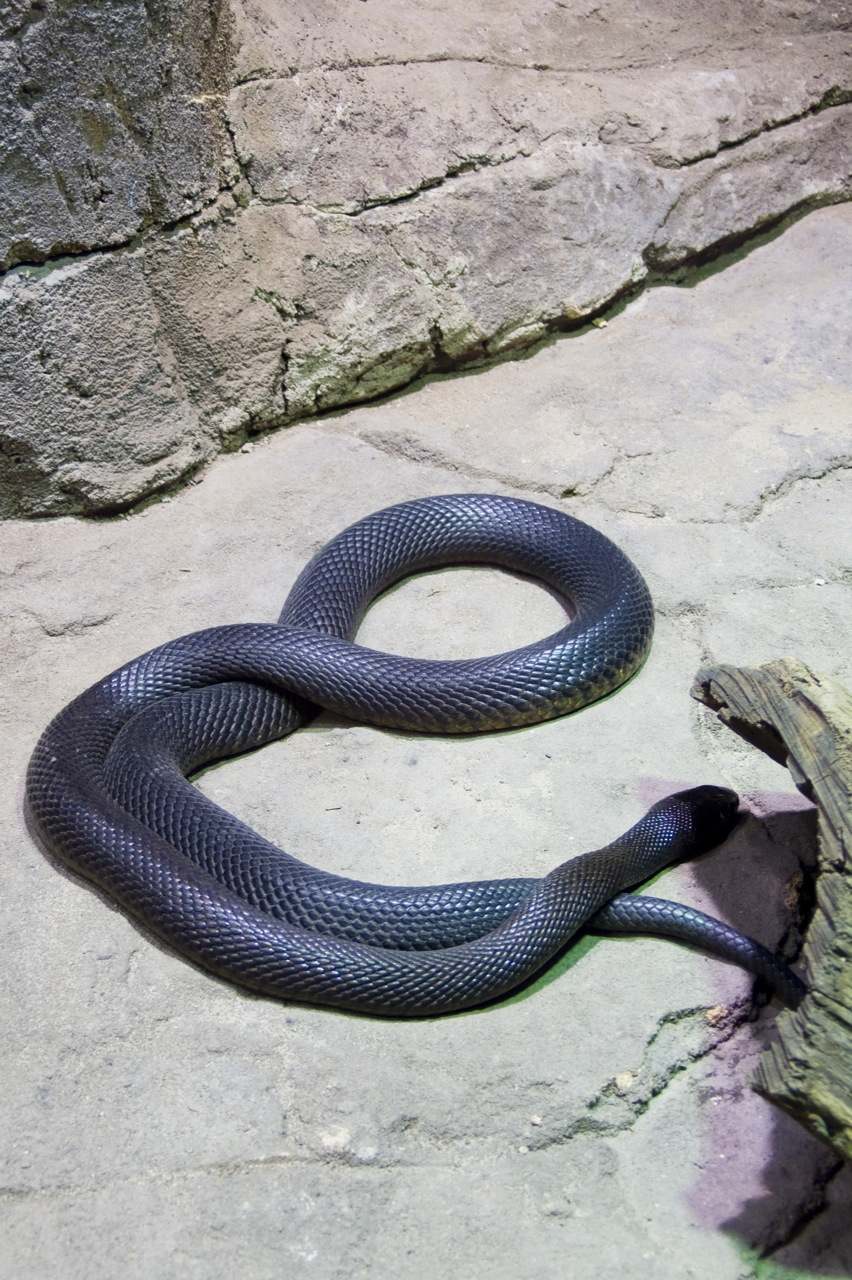 This snake, which is also known as the Fierce Snake, is widely accepted as the most venomous land snake in the world.

These reclusive reptiles which inhabit parts of Australia, on average reach between 2 and 2.7 metres long in adulthood and are members of the elapidae family, meaning they have fixed front fangs.  Although the fangs are relatively short, they deliver a type of venom that is so toxic, should you be unfortunate enough to be bitten by one, it has the potential to kill you within 45 minutes.

The average amount of venom delivered is 44mg, but there has been up to 110 mg recorded, which is more than enough to do some serious damage to any living creature.

Furthermore, the venom is so powerful that with one single bite, this snake’s venom would kill 100 humans or a staggering 250,000 mice and is the reason that the snake is also known as the Fierce Snake, not because of its temperament or behaviour. 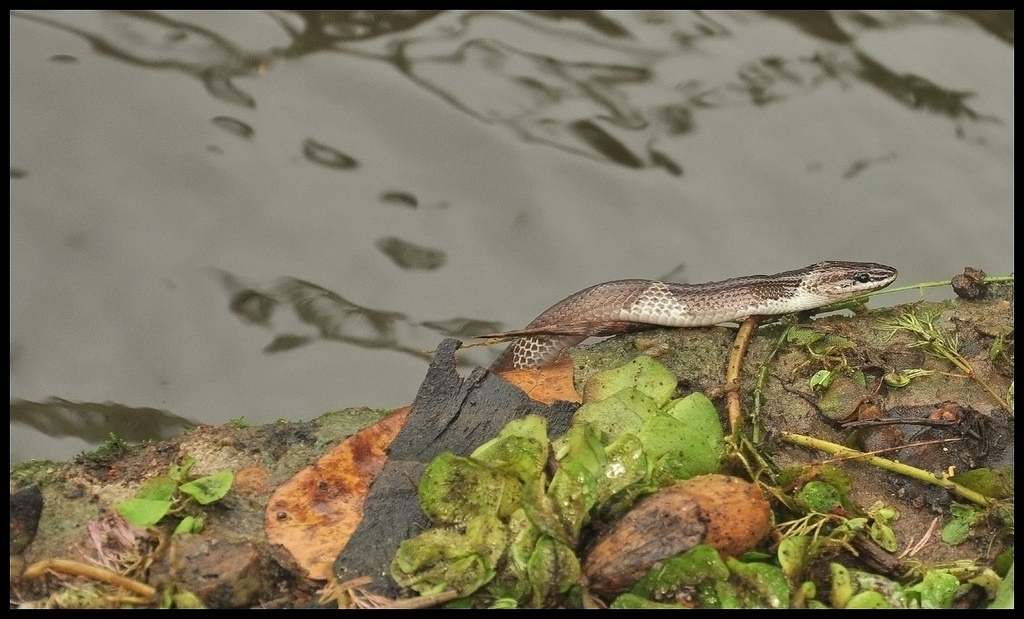 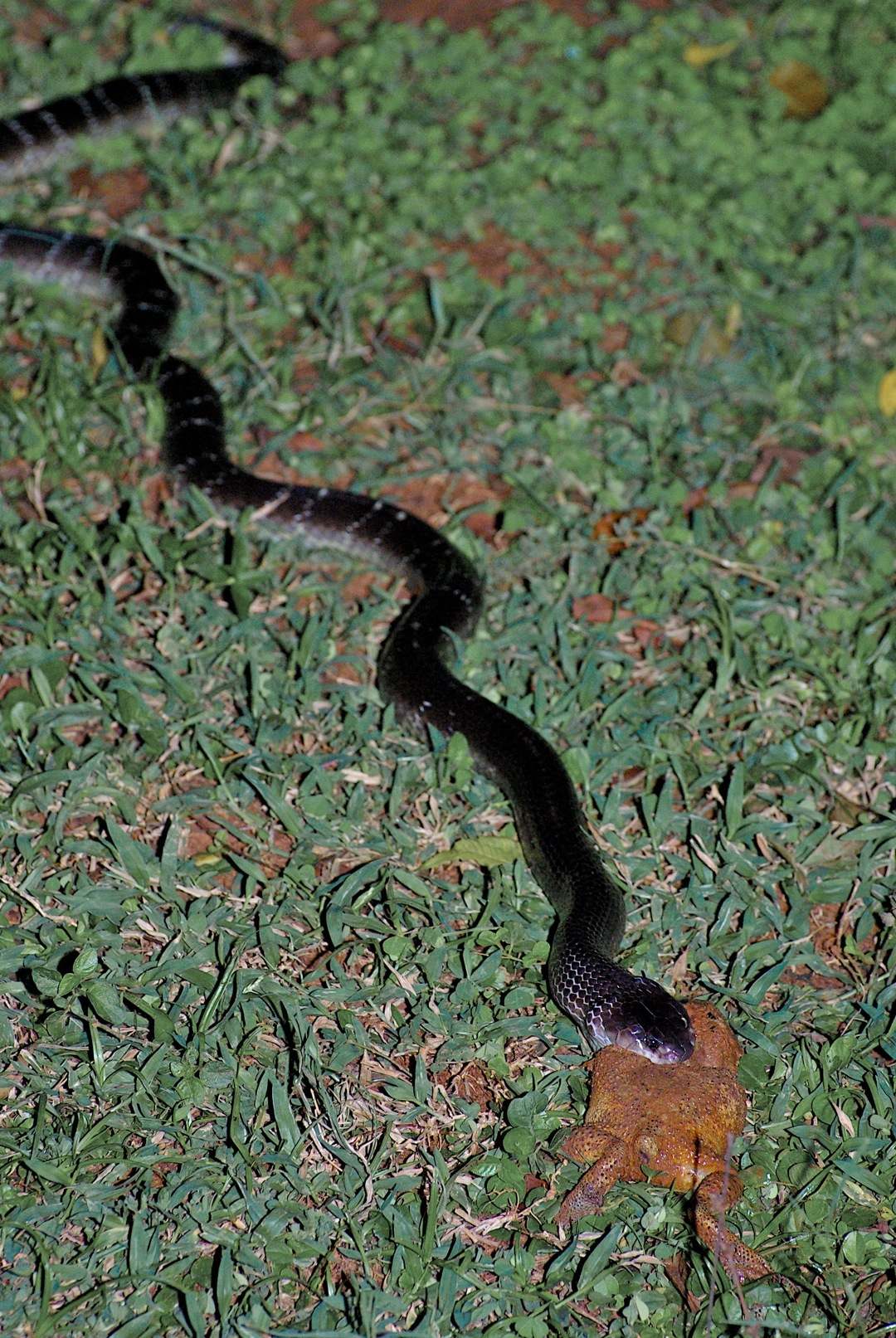 Calling the jungles of the Indian sub-continent home, the Common Indian Krait likes to be close to a water source, which makes encounters with humans almost inevitable.

Usually growing to around 2 to 2.5 feet, although they can be reluctant to bite, when they do they will hold on to make sure that they deliver a considerable amount of their deathly venom.

A vast majority of the recorded bites to humans from this snake have taken place during the night when the victim is sleeping and the bite itself causes little or no pain, so many times the victim is unsure if they have been bitten. It can be only when the victim complains of very bad abdominal cramps that they realise what has happened and this is followed by a progressive paralysis as the neurotoxic venom takes effect. 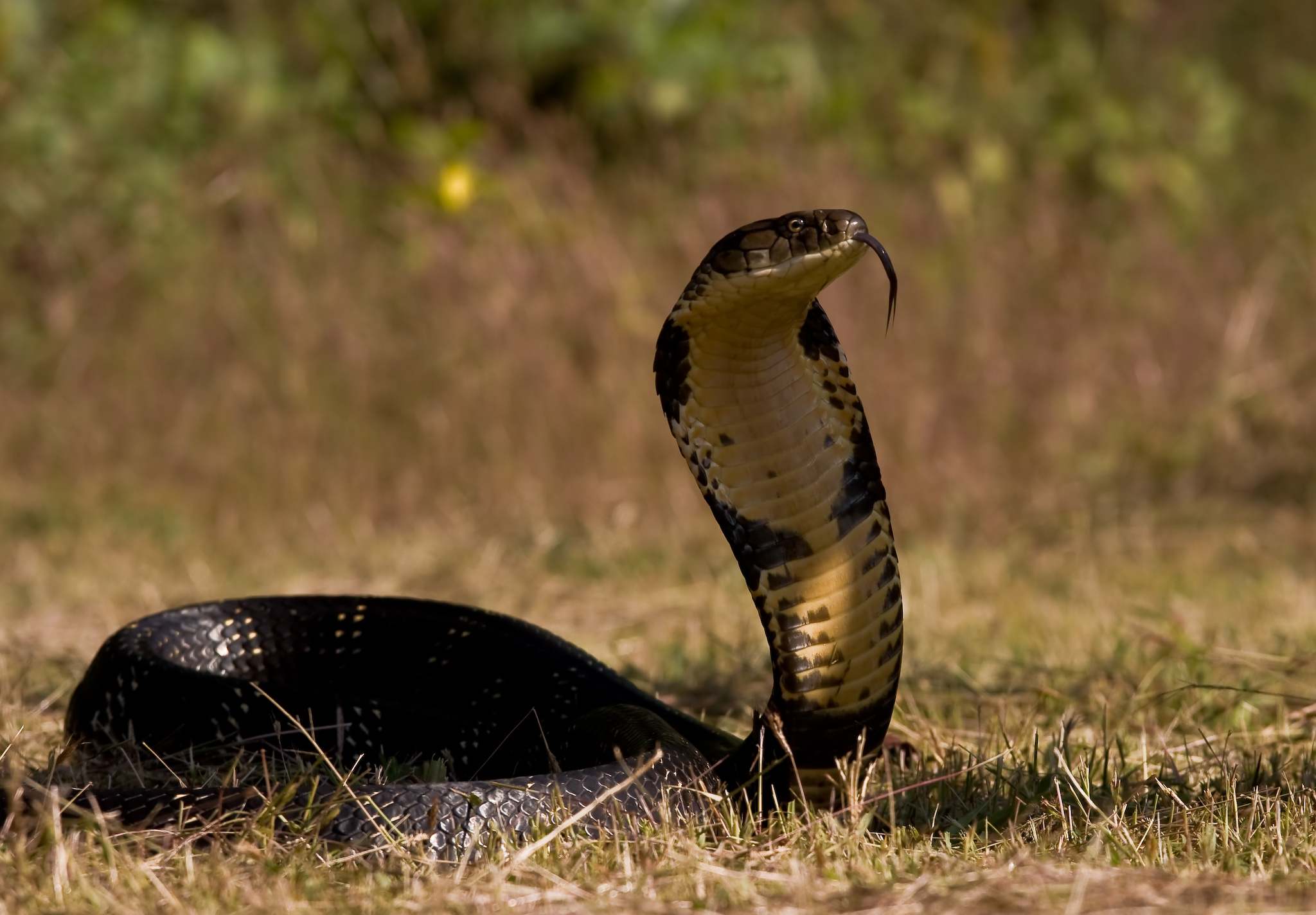 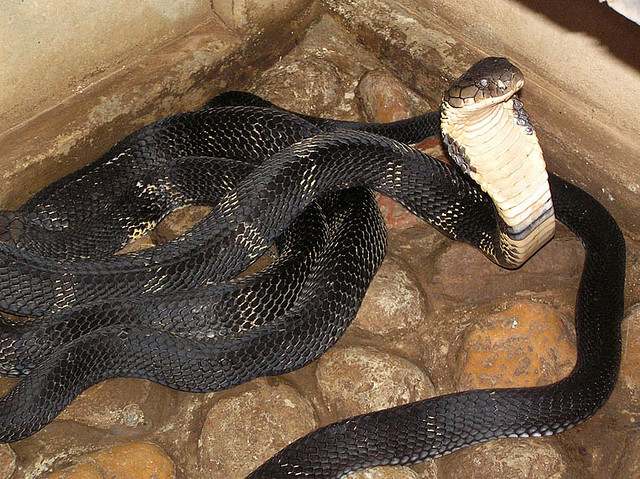 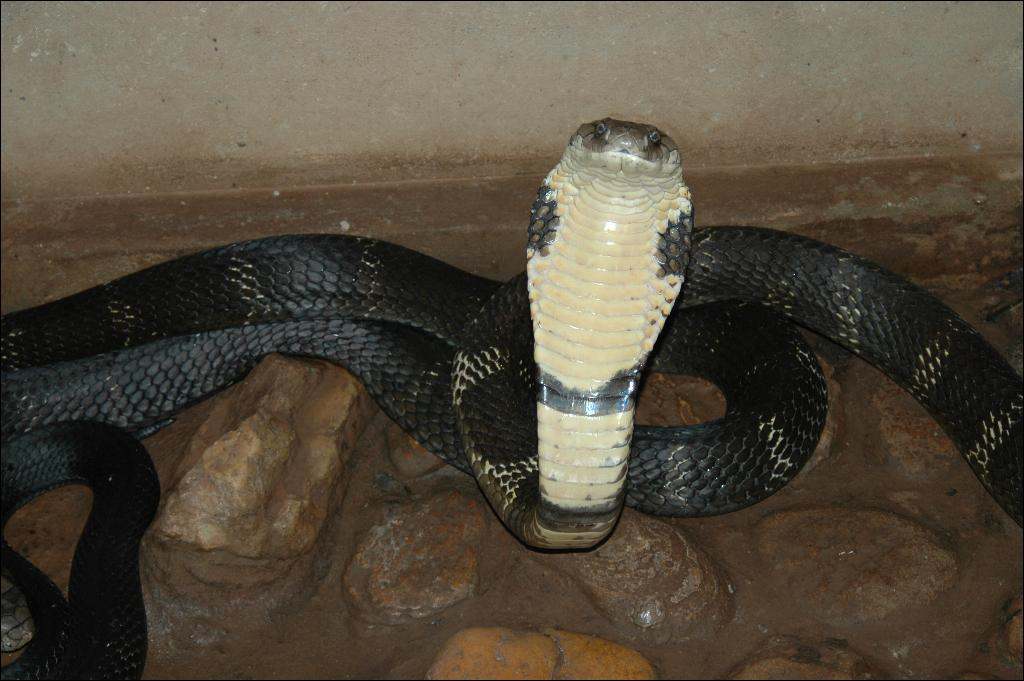 Known as the choice of many snake charmers who play their flutes to make the cobra dance, this in itself is odd as the snake cannot hear the music, but simply reacts to the ground vibrations and movement of the flute and charmer.

These creatures are the longest venomous snakes in the world and can reach a colossal 5.5 metres (approximately 18.5 feet) in length, which gives them the ability to be able to stand up and look a human square in the face.

These massive reptiles are the only snakes that will build a nest in which to lay its eggs, which it will guard until the young are hatched. This show of tenderness belies the fact that the venom from the King Cobra carries enough neurotoxin to kill an elephant or 20 humans.

The fact that they are just as at home in trees, on land or even in water usually means that it will cross paths with humans, but they will avoid confrontation where possible. 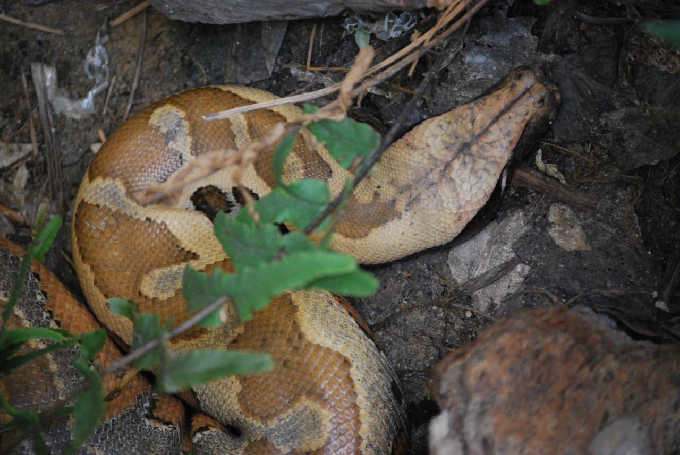 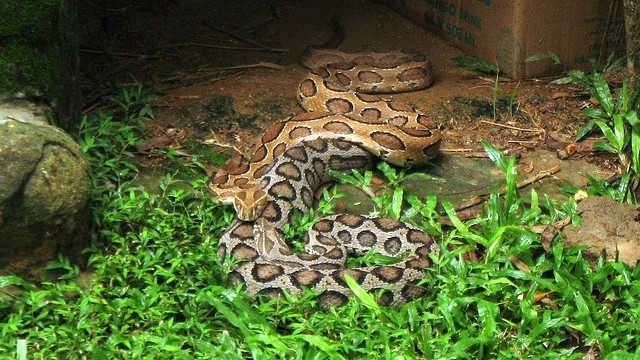 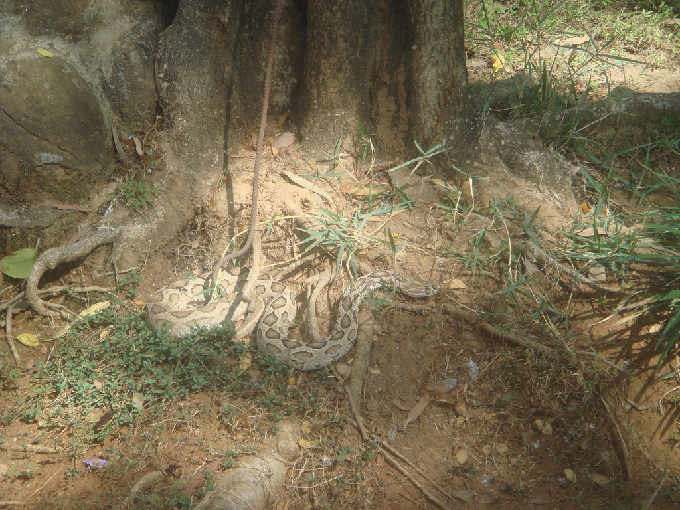 This Russell’s Viper, a snake which on average is around 1.3 metres long (approximately 4 feet) and 15 cm (6 inches) in girth causes more deaths that any other snake in the world, predominantly because of the many areas of Asia in which it lives and the fact that it is a regular visitor to highly populated areas, making encounters with humans almost a regular occurrence.

It was named in honour of Patrick Russell, the Scottish herpetologist famous for originally describing many of India’s snake population

This specimen is what is known by some as a true viper, meaning that it lacks the heat sensing pit organ. They do, however, have long tubular fangs which are more than capable of delivering a lethal dose of their haemotoxic venom which brings about thrombosis and cardiac arrest. 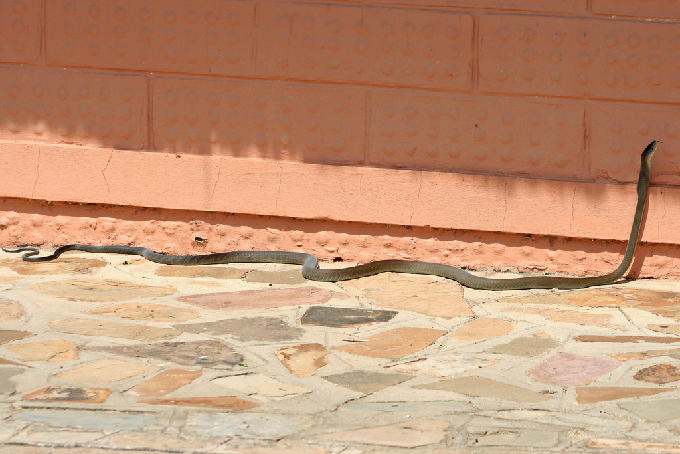 Contrary to popular belief, this infamous creature is not black, but normally grey or olive – the black in its name refers to the colour of the inside of its mouth, which it displays when it feels threatened.

Living in eastern and southern Africa, although, like most snakes, the Black Mamba will avoid direct contact with humans if possible, they will, if cornered, go into attack mode. Usually involving spreading their cobra-like neck flap, raising their head as far off the ground as possible and hissing, if this does not deter the attacker, the snake will then strike – not just once, however, but striking and biting repeatedly, each time injecting a large dose of its venom.

Black Mamas are also amongst the fastest snakes in the world, which means that they can move across the ground at around 20 kilometres (12.5 miles) per hour, fast enough to see off many would be assailants.