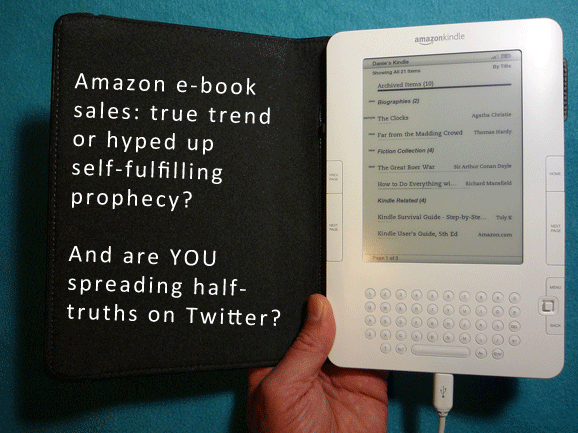 Be Careful What You RT: Mashable Spreads Amazon’s Hype via Twitter Sheep

It seems that whenever I log onto Twitter now I find people retweeting a post from Mashable. The post is about Amazon.com and their claim that e-books are apparently getting uber-popular because (*gasp*) they’re outselling hardcover books. This pisses me off. Not the fact that e-books are doing well, but the fact that Mashable (yet again) decided to post a stats-centric article with no semblance of critical thought before kicking it out to the RTing masses.

This isn’t the first time I’ve called Mashable out on posting faulty stats that mislead readers and help to create non-news more than reporting actual news. And while I hope it’s the last, I somehow doubt it.

Now look. I’m not a regular Mashable reader, but I’m also not someone with an axe to grind. I read them periodically, retweet their stuff when it’s not nonsensical, and can certainly appreciate their writers’ talents for crafting linkbait-worthy headlines. I just have little tolerance for people with influence in the blogosphere who choose to use that influence irresponsibly. And I’d consider passing along half-assed info without asking legitimate questions to be precisely that.

Let’s explore some of the claims from the post (meaning the stats from Amazon that Mashable chose to pass along to readers without any further worthwhile context), and what the potential problems are. We’ll look at some of the questions they should have asked before contributing to the current Amazon hype-storm all willy-nilly. And then I’ll point you to some better sources — the ones that did.

Amazon Kindle E-book Sales: The Good, the Bad, and the Really Really Ugly

I love e-books. So don’t get me wrong. In no way am I saying that e-book sales aren’t growing or that they shouldn’t be growing. I’m an e-book reader. I’m an e-book author. They have a time and a place, and I adore them for what they are. But they’re far from print book killers as Amazon’s latest news would have it sound.

The basic claim is this — Amazon announced that their Kindle e-book sales exceeded their hardcover book sales by 80% in the last month. E-book sales are on the increase. Good for them! Really. I’m happy that more people have more access to more titles (even if I don’t agree with Amazon trying to strong arm publishers which in turn puts my author pals in a potentially tighter spot down the road — but the consumer misinformation about pricing is another topic altogether).

That’s the good side of the “news.” The bad side is how much information Amazon left out — the information that should have provoked questions from folks with sites like Mashable. The ugliest bit of all though is the fact that this was little more than intentional spin and twisted, hyped up stats from Amazon as they tried to generate buzz around their Kindle in the wake of growing competition in their market from products like the iPad and Nook. And they played quite a few tech-related sites like their little bitches to do just that. And that’s sad. Very sad.

Ignorance Conquers Critical Thinking: What Should Have Been Asked

I think I’m a fairly reasonable person. I don’t expect Mashable’s contributors to go out and find the answers to all of the looming questions. But when they know they have a large audience, many of whom seem to retweet just about anything they post without giving it another thought, I at least expect them to ask. Put the questions out there so readers can contemplate them themselves (at a bare minimum).

The moment I read the stats in their post my nose started twitching. I get very uncomfortable when I see directly self-promotional stats that are clearly tweaked and twisted to a make a point, regardless of its actual validity. Given that the statistics squarely rested on Amazon’s own Kindle versus hardcover sales records, the first things that came to mind were:

Maybe it’s just me, but those seem like pretty natural questions to ask. They seem like things a writer should pose to their readers to help them make their own informed decisions about supposed news before they casually spread it like a disgusting little virus that gets twisted into cries of the death of “dead-tree books.” Seriously.

I do have to give some credit where it’s due though. The last time I called Mashable out on feeding into a stats frenzy without thinking it through, I didn’t see it caught and called out by more than a commenter or two. Fortunately this time it was different. Despite the fact that many of Mashable’s readers still blindly spread the post via Twitter with no regard for getting the whole story (over 2200 retweets at last check), their commenters on-site were indeed flexing their intelligence — asking questions and pointing out obvious flaws.

Not only were readers wising up more quickly, but plenty of other sources covering the story did the same. And they asked some of their own questions and pointed their readers to other industry facts that should have been considered. Two examples were NPR’s Monkey See blog and CNET.

NPR’s Linda Holmes pointed out the price point issue too, noting that e-book sales include things like 99-cent and slightly higher-priced self-published e-books (which are much easier to sell in basic quantity than pricier hardcover editions of other books). The cheap e-book issue (as in both cheap in price and meaning crap quality) is not a new one. It’s been around as long as e-books have — much longer than Amazon’s acknowledged their existence. That issue is what soured many early e-book readers from buying e-books online in the first place. Will it have the same effect on the more general masses as they purchase these lower quality titles on the cheap? I don’t know. And again, that’s really another issue to watch. But it does make me wonder if the success now might hurt e-book sales on the Kindle later in a similar vein.

CNET’s David Carnoy shares his own list of questions and points regarding the Kindle vs hardcover stats. And he brings up some excellent things, such as revenue. Are e-book sales on Amazon bringing in more revenue than hardcovers? Or is it solely a case of selling higher quantities of cheaper goods (which is a much less impressive thing to boast about)?

Carnoy also notes that romance novels are doing well in e-book form — a genre that usually does well in paperback, so you couldn’t directly compare those e-book sales with hardcover sales. That alone brought another thought to mind — summer reading. Is the growth of e-book sales in this and similar genres a seasonal thing? Will it continue? Again, I don’t know. But it’s a valid consideration before getting worked up over generic stats.

While I can’t tell you exactly what’s going on with Amazon’s own hardcover sales, The New York Times reported an interesting industry-wide stat from the American Publishers Association (by which I assume they meant The Association of American Publishers, although I could be wrong — interesting stats there nonetheless). Apparently hardcover “sales are up 22 percent this year.” That hardly sounds like a death cry to me — except maybe for Amazon’s big “news.”

Amazon’s own press release seems to go out of its way to make the information misleading at times. For example they say “This is across Amazon.com’s entire U.S. book business and includes sales of hardcover books where there is no Kindle edition. Free Kindle books are excluded and if included would make the number even higher.” It’s as if they’re looking for a pat on the back for only being slightly sleazy in how they presented the numbers because they didn’t also try to toss freebies in there. More importantly though is how they twisted the first part when it could equally be said that “this includes e-books where there are no hardcover editions available, and if we removed those to make a fair comparison it might make the number even lower.” A “tipping point for growth” my ass.

As you can see, there’s far more to the Amazon e-book sales story than Amazon (and sites like Mashable) would have you believe. Maybe I’m foolish or naïve for expecting some level of critical thought to be put behind reporting. But for the time being as least I know what sources to have some faith in, and which ones to sweep under the rug. Now if only their readers would stop spreading the half-truths before they understand there’s a bigger picture in play. Perhaps that’s where the real blame lies.