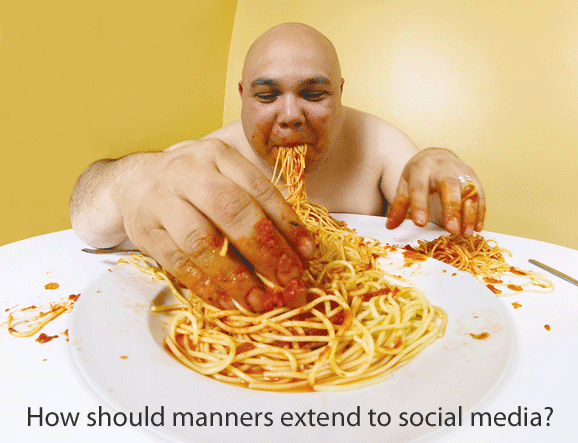 Social Media Etiquette: 20 Dos and Don’ts to Avoid Looking Like an Ass

Whenever I hear the word “etiquette” visions of stuffy old charm schools play in my head. I don’t believe you have to (or even should) be nice to everyone all the time just because you want everyone to like you. It’s okay to dislike people, disagree with people, and share honest opinions as long as you can back them up. I’m also not a big believer in wearing a peachy little persona all the time just because other people tell you that you should.

I’m going to throw a buzzword at you, but one I think really matters — authenticity. I’d rather someone truly be themselves when I meet them in the social media space as opposed to watching them putting on a show.

That said, I’m a surprisingly big fan of general social media etiquette. I think it’s often less about manners and more about basic common sense. There are plenty of things that you wouldn’t want people doing to you while you’re on social networks, blogs, or using other social media tools. So don’t do those things to others.

If you want to avoid coming across as a complete jackass, getting yourself banned, or just being blacklisted by your network, here are 20 tips for social media etiquette you might want to keep in mind.

Grow Your Business with These 50 Must-Have Tools in 2022