How Airlines are Using Social Media

Want to know how to use Social Media in Business… Follow an Airline.

These airlines are using Social Media sites such as Twitter, Facebook, YouTube, Flickr and some are Blogging. These all are great ways to get the online community involved… to get them motivated to travel, to get them talking about the airlines…. what they love and what they hate. To get them spreading the word of what airline they should be traveling.

Facebook is an excellent way to engage customers. And, Virgin America is doing it well. Check out Virgin America’s amazing Facebook Page: 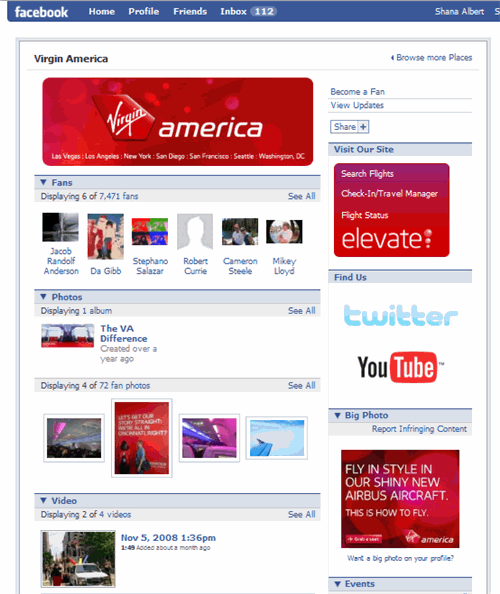 Their Facebook page reminds me very much of a website. Upon first getting to their facebook page you will first notice the amazing color. Which I feel keeps people there for a while checking things out. But, more than that there is a lot to do once you arrive. Even right there on their facebook page visitors can click links to search flights and check flight statuses. Plus, they can do a bunch of fun Facebook interactions.

What makes their Facebook Profile stand out to me is the fact that they are encouraging their customers to engage with one another. They make it easy to not only build relationships with other customers, but with the airline themselves. Happy customers mean returning customers and it appears Virgin America gets that.

Another great way these airlines are using Social Media to help their business is with Flickr.

Let’s face it when people travel they take pictures. Traveling is very personal. Many people are traveling with family or traveling to visit family. Either way they are making memories and they are counting on every moment of their excursion to be part of it…. including their travels there and back.

So, because of this reason it just makes sense for Flickr, a photo sharing community, to be part of the social media activities being used. And, it certainly is. Let’s look at JetBlue’s Flickr Group as an example… 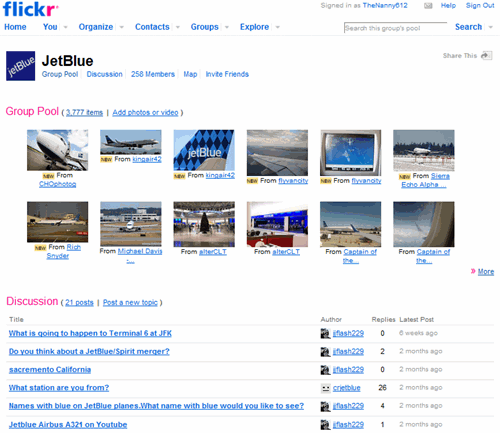 JetBlue has a nice Flickr Group. In their group there are already 3,777 items…. both photos and videos. Members of this Flickr group can comment on each other photos and can add each other as friends…. encouraging relationship building. These members appear to be customers, fans and employees of JetBlue and from the comments are totally connecting. 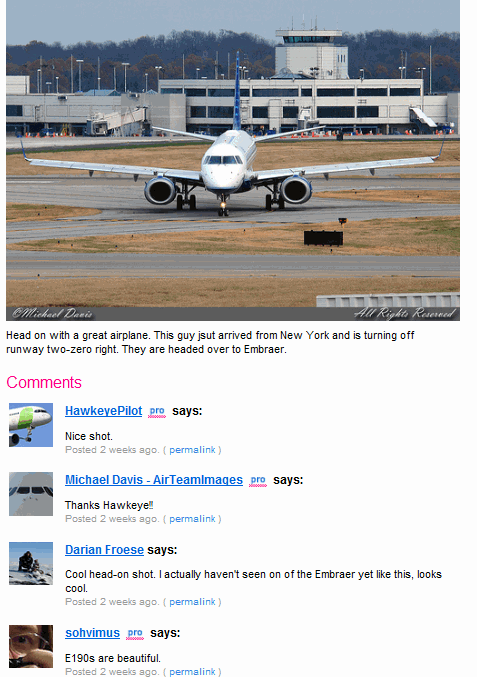 The JetBlue Flickr group also has active discussion boards. This is a great place to start discussions in the same format as other message boards and forums. Ask questions, give opinions and even offer suggestions to the airlines or members of the community.

So, as you can see the memories don’t just sit in a photo album in a cabinet at home, but instead are being shared and enjoyed with others. Plus, around these wonderful photos relationships are being made…. it doesn’t get much better than that.

Many people are very visual… I’m a very visual person. I love to look at videos when things are being explained to really get a feel of what they are talking about. And, there is no exception when it comes to traveling. If I’m going to be spending hours in the air I want to make sure I’m as comfortable as possible. I want to know exactly what I’m paying for…. video is a great way to do this. Plus, videos are very engaging and entertaining…. they truly hold the viewers attention. 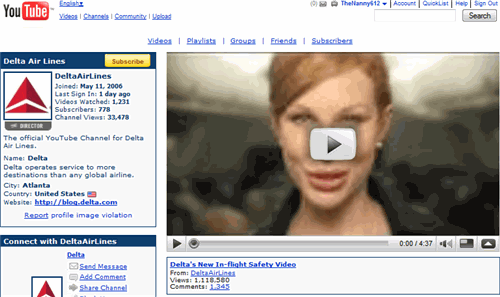 “The safety video generated such a buzz after being posted on the Atlanta-based airline’s corporate blog and on the video Web site YouTube that admirers dubbed the 33-year-old Atlanta woman “Deltalina,” a combination of the airline’s name and Hollywood actress Angelina Jolie, who they say she resembles.”

DeltaAirLines on YouTube have tons of other videos to choose from as well. Including, Travel Guides where Delta employees showcase their favorite destinations around the globe.

If you spend any amount of time on Twitter it is hard to not notice somebody talking to or about airlines. Traveling takes a lot of planning and people will ask for suggestions and recommendations when it comes to something important like booking a flight. Also, when people are waiting on a flight or are in an airport during a long lay-over they don’t have much to do so instead they are spending time on Twitter commenting on what they are doing, eating, seeing. If they are happy… they Tweet that. If they are unhappy or disappointed… they will tweet that. Some Airlines are listening. Let’s use Southwest Air as an example…

SouthWestAir does a nice job at using Twitter to help their business. They use it in a number of ways…

And two of the airlines are blogging very well. You should check out both the Delta Blog and SouthWest’s Blog. They both are doing an excellent job. They blog regularly about everything from airline news to airport food to new airplanes to new airports. They are also making sure to list all of their other social profiles oin their blogs…. helping their fans and customers stay in contact with them all over the internet. Very Cool!!!

Let’s take a look at SouthWest’s Blog…. truly, their blog is exceptional. Not only is it extremely user-friendly and very easy to follow…. It is set up so wonderfully. Check it out… 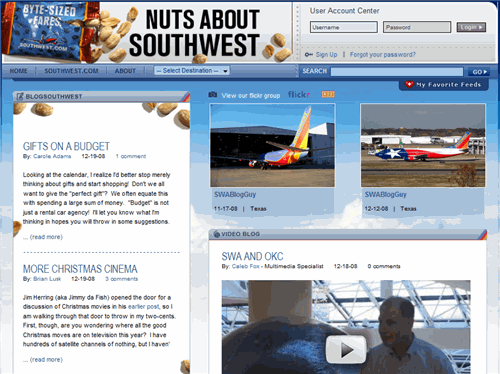 Tell me this blog isn’t nice!! On the left you have little summaries of posts… and they post very regularly. And on the right hand side they have pictures from the Flickr Group and beneath that you have their video portion of their blog. Lower down on the blog you will see that you are able to listen to their podcasts… yes, SouthWest does podcasting too!!

And, the bottom half of their blog is just as good as the top part. Check this out…. 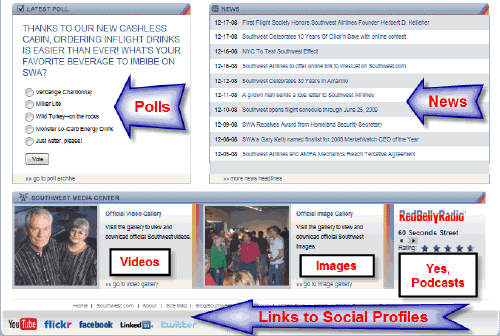 The one area all Airlines need to work on…..

Airlines have a chance to get personal with their customers and potential customers. They can calm down the lost traveler, entertain them when they are delayed, feed them when they are hungry. They can use their customer service skills to make an ornery traveler happy again. I’m not sure they are doing this. Even SouthWest that I used as an example above isn’t twittering enough. Sometimes they go days without a tweet and I’m sure there are people tweeting them and about them 24/7, so they are missing a lot…. a lot of good Customer Service via Twitter.

Even the other airlines that are using Twitter aren’t posting enough to be using it effectively. As much as the airlines are being talked about via Twitter they don’t respond nearly enough. I understand that they have a huge mass of customers and responding to all would be extremely difficult. But, in my mind they need to hire more people to cover this and to treat Twitter as a Customer Service Platform. The more happy customers the more returning customers. Even a question posted directly at some airlines go unanswered. As of the writing of this post my question has been unanswered 3 days later… 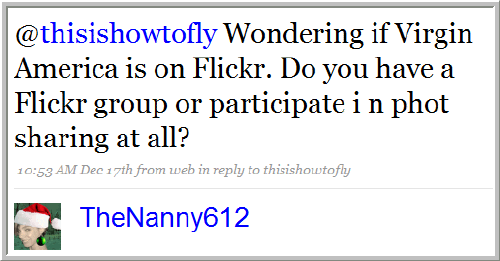 For the most part Airlines are using Social Media effectively

Even with the Twitter area that needs improving… I am totally impressed with how these four Airlines are using Social Media. They are keeping their customer’s engaged which keeps the Internet talking about them. As long as there is a talk about these airlines it keeps them on the mind of travelers and future travelers. Grant it, the talk should be good. But, if it is not all positive this is the Airline’s chance to step up…. to help the traveler, to make the traveler happy, to help them become content and satisfied. If the airlines aren’t responding they aren’t making the impression they should on their customers. If they won’t step up….. another airline will.

Grow Your Business with These 50 Must-Have Tools in 2022