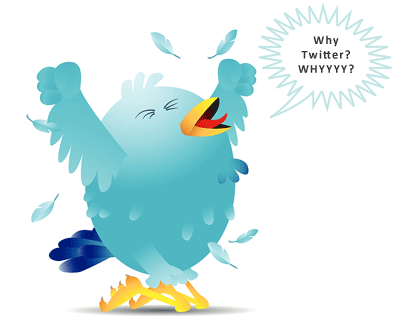 I’m going to be up front with you. I’m not a fan of advertising on Twitter. I’m even less of a fan of posting ads to my own Twitter account. So I clearly have some bias. Twitter advertising can be a hot button issue for some though, causing followers to flee or advertisers to come a-calling. Some love it because it’s a way to monetize something they do anyway, or reach a new targeted market. Some hate it because it causes unsolicited clutter and “invades” real relationships. I fall squarely into the latter group.

Now don’t get me wrong. I’m not anti-advertising in general. And I’m not saying that advertising has no place in social media. But Twitter is an exception for me. Here’s why:

It’s Not What I Signed on For

Twitter is primarily a networking tool. It’s a place for conversations, no matter how abbreviated. For most Twitter is not a tool for simply broadcasting commercial messages. Now I’m not one to say that everyone should or has to use a social media tool in the same way. That would be both ignorant and self-centered. But I will say that everyone has a responsibility to their followers.

No matter where you’re interacting with your audience, you have a responsibility to respect them and provide what’s reasonably expected to some degree. Behaving in one way to get followers, and then in another way once you have them is misleading at best. I consider Twitter advertising to often show a lack of respect. In my particular network, it’s not the norm. And to litter my stream with ads for (often irrelevant) products and services is a matter of wasting my time. As if there isn’t enough noise on Twitter already.

I’d “forgive” the occasional Twitter ad in general if the person usually shares great tweets or stays personally involved. But I have my limits, as do most. And those limits are fairly low. I won’t hesitate to point out and criticize behaviors that waste my time or show no forethought. I have very little respect for the companies buying these ads knowing they’re intruding on a largely conversational medium of people who have some level of trust for each other (we aren’t talking about blogs here where there are sidebars and headers to tuck ads into separate from the content, or where we have plenty of room for full disclosure). And quite honestly I have less respect for the colleagues who advertise for third parties using their tweets (although I have no objection to them promoting their own books, albums, or sites within reason given that my network is based on primarily professional connections — in a more personal network, that might be a bit different).

I know what some of you are thinking — “If Twitter ads bother you so much, just unfollow the person.” I’ve heard that argument a lot. And do you know what? It’s a completely bullshit argument.

Unfollowing someone should not be the primary recourse for having unsolicited ads thrown in my face. And I shouldn’t have to eliminate someone from my professional network just because they make occasional poor decisions about what they choose to advertise or how often. As I already mentioned, it’s about respect. And everyone using Twitter or any social media tool has the responsibility to know their audience well enough to know when what they’re doing could be deemed disrespectful.

Remember, just because people aren’t moving in droves to unfollow you, it doesn’t mean they’re okay with your new Twitter ad posting behavior. It just means they like the other things you say enough to stick around (or your ads are buried quickly within other Twitter noise, and they just haven’t seen it yet). But that says nothing about the potential damage you’ve done to your reputation in their eyes. Still subscribing to what you say doesn’t mean they care as much about your opinions. So think about where your “real” money comes from before deciding to make a few bucks on Twitter, and ask yourself whether those income streams could take a hit to your reputation. If they can, by all means, post away.

There’s nothing wrong with diversifying your income streams. I don’t begrudge anyone an income from what they do. Just don’t forget to have some tact. At least a little….