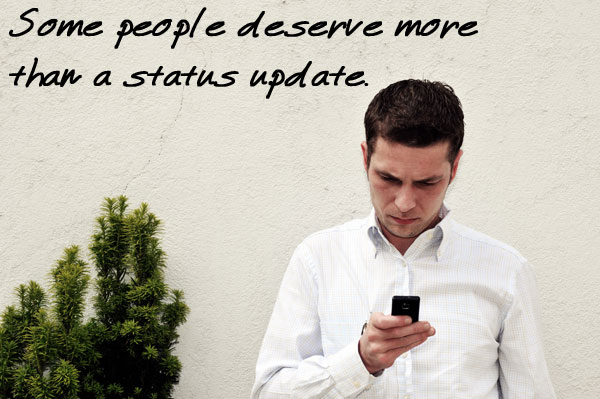 Think Before Sharing: Things You Shouldn’t Rush to Share Via Social Media

Social media enables us to share our every thought on a whim, with anyone from friends to fans we don’t even know. That doesn’t mean we should share freely all the time. Some things other people don’t want or need to know. And sometimes it’s just about your timing.

Let’s focus on the latter.

How One Social Media User Put Facebook Over Family

Several months ago a relative of mine found out that her sister was pregnant. But she didn’t hear it from her sister directly. She didn’t even hear it through loud-mouthed family members who couldn’t hold their tongues. She found out she was going to be an aunt by stumbling across her sister’s Facebook update.

On one hand it’s understandable that someone would want to share that good news with friends, and doing so via social media makes sense for more casual relationships. But not your sister (and I believe her father also was informed well after the Facebook announcement). We aren’t talking about sisters who hate each other and are completely estranged. They’re not the closest, but the relationship deserved some semblance of actual respect.

This is an example of lousy timing of over-sharing through social media tools. It was stupid and insulting to members of her family. The Facebook update could have easily waited until she made a few personal calls to those for whom they would have been more appropriate.

This is just one example though. There are plenty of other things you probably shouldn’t rush to share through Facebook, Twitter, or your other favorite social media outlet before making a more serious effort to reach out to a few individuals first. Here are some examples.

Don’t Rush to Tell the World…

These might sound like crazy examples, but I’ve seen a few of them happen. Back in the day when Myspace was the place to be, I knew someone who used to rant whenever she was mad at someone or just generally upset. And she would often threaten to delete her whole account over it (and did a couple of times). The next thing we all knew things were fine and dandy between her and whomever she was upset with, and she acted like it never happened (until the next time).

I’ve also known people who updated social media profiles to reflect that they were single in lieu of actually breaking up with someone. Their ex was just supposed to know apparently — which means another friend probably saw the update first and sprang the news.

It’s unnecessary drama. And it’s easily avoided. How? Remember which relationships come first and respect those people enough to actually speak to them. Or has our quest for “conversation” online turned real conversation into a lost art?