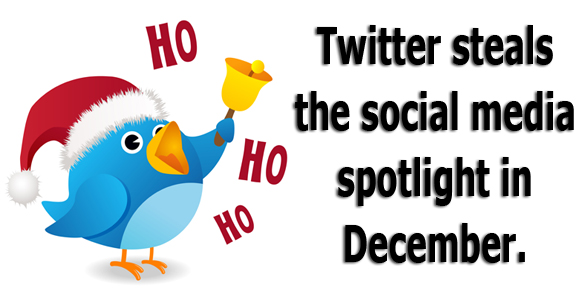 Every month we highlight some of the biggest news in the search and social media industries, bringing you stories you might have missed (and giving you the opportunity to share others we might not have seen). It’s that time again!

In fact, it’s our last update of the year. So let’s see what giants like Google, Facebook, and Twitter have for us this month with stories to send off 2011.

I guess Twitter was feeling a little left out with all the hype around the new Google+ brand pages finally launching. So they’ve decided to launch their own version to stay competitive. Two of the biggest benefits for brands are the ability to make your own logo / branding more prominent and the ability to promote a tweet to the top of your feed. So you can keep an important announcement front and center even if you continue to tweet follow-ups.

Alongside their new brand pages, Twitter announced another design change (making “new Twitter” the new “old Twitter”). I haven’t had a chance to dig into the changes much yet, but I like the cleaner look. The cluttered nonsense of the last “new Twitter” is why I clung to the old. It wasted too much space above the fold with things I didn’t give a rat’s furry little behind about and hid more actual tweets. So I’m glad to see Twitter fixing that issue. Check out the link below to see it (or the mobile version) for yourself.

If you’ve been waiting for any kind of Google + analytics to roll out, you might be happy about their new Ripples feature. While hardly comprehensive metrics, this “visualization tool for public shares and comments” will at least let you see how your posts or conversations have grown or spread across the network. I like the archival nature of it where you’re able to go back and review a past conversation in a new visual way. Kind of cool. Check it out in the video below.

Feel like your friends don’t ramble on enough on Facebook? Then you’ll be thrilled to know that Facebook now lets them post status updates of more than 60,000 characters if they so desire. It’s an obvious move to compete with the longer posts and more substantial conversations on Google Plus. But in their “we want to host your personal blog in addition to your network” kind of push, both companies are starting to feel more like LiveJournal wannabes (long after LiveJournal ceased to be cool).

I’m not going to get into the details of the case and whether or not the blogger in question really did post libelous material. But what’s interesting in this Oregon case is the fact that the blogger wanted to hide the identity of a source. The judge basically concluded that bloggers aren’t journalists and therefore aren’t afforded protection by the state’s media shield laws. One reason is the fact that she has no “affiliation with any recognized news agency.”

Makes one wonder what constitutes “recognized” and whether or not this judge has any real understanding of digital media. What about traditional news outlets that also run blogs with lower editorial standards (and there are plenty)? I guess we’ll have to see how this plays out if it’s appealed.

If you hadn’t heard about Facebook Timeline when it was first announced, you’ve probably taken notice now. The new feature was publicly launched on user profiles. Basically Timeline allows you to highlight your most important updates and show friends a chronology of your life. That means you no longer have to worry about big updates being buried almost immediately by the mundane. Go ahead and enable Timeline today, adjust yours (such as by hiding things you don’t want there), and let us know what you think.

What other news have you seen lately from search engines and social media companies? Share your favorite stories in the comments below.