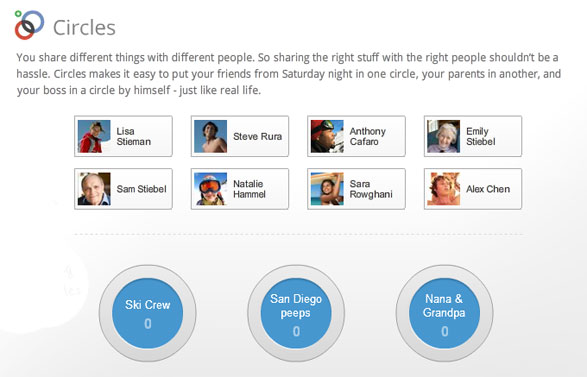 Search and social media are two constantly (and rapidly) evolving areas. So to serve you better and make sure you don’t miss some of the bigger or more interesting stories, we’re launching a new series. Near the beginning of every month we’ll reflect back on the previous few weeks, highlighting some of the search engine, SEO, and social media stories that grabbed our attention.

Google has generated a lot of buzz recently with news on both the search and social media fronts. But they’re not alone. Facebook, Microsoft, Baidu, and even Myspace make a showing this month. Check out some of the latest stories, or share other news that has you excited in the comments.

Google has dominated social media news lately with the launch of Google+ — their latest attempt at a Facebook killer. Not a fan of Facebook myself, I’m looking forward to seeing how Google+ might (or might not) be a better fit. One of the main features I’m excited about is Google’s “circles.” Basically you can group your friends, family, colleagues, or whomever into different circles and share different information with each group easily. I just received my invite today and can’t wait to test it out. Are you on Google+ yet? Do you think Google+ will have any affect on traditional search? [source]

One of the biggest stories in search right now is the discontinuation of Google’s real time search feature (where they showed tweets and other information as it happened). This is reportedly due to a contract expiration between the search giant and Twitter. Google has also discontinued other enhanced search features including the Wonder Wheel and they’re sporting a new look (including a black / charcoal bar at the top of the site which seems to be a “love it or hate it” change). [source]

Facebbook and Skype announced a joint effort to bring you video calling and better integration between the two services. You’ll be able to video call your Facebook friends and even set up group video calls through Skype. How will you take advantage of these features? Do you think video calling was a natural step for Facebook? [source]

Google released their Panda 2.2 update in mid-June. Some webmasters have seen their rankings improve from the last update while others are now feeling Panda’s pain. Where do your sites fit in? According to Matt Cutts the update specifically targets scrapers. [source]

Where Google was previously willing to pull out of China, Microsoft wants a way in. With that goal in mind Microsoft recently came to a deal with Chinese search giant, Baidu. They’ll work together to provide English-language search results to the market. [source]

If you’re both a Facebook user and an early user of Google+, I bet you’d love a way to move your friends’ information to the new tool. Right? Well, with Google+ barely out of the gates Facebook is already putting a stop to it. They recently blocked the Chrome extension, Facebook Friend Exporter, that allowed users to export Facebook contact info and import it into their Gmail address book (where Google+ pulls contact details from). Does sharing their info with you count as an opt-in where you should be able to move to another service (like with email marketing)? Is this a move to protect user privacy, or just an anti-competitive strike-down? We’ll let you decide. [source]

News Corp. finally parted with the social network, Myspace, at a huge loss. It was sold to Specific Media for $35 million. Apparently Justin Timberlake will have an ownership stake and some say in the site’s future. Do you think the new owners can breathe life back into Myspace by going back to an entertainment focus, or is Myspace just clinging to its last breath? [source]

Share your thoughts on these recent stories from the search and social media industries, or share other stories with our readers by leaving a comment below.