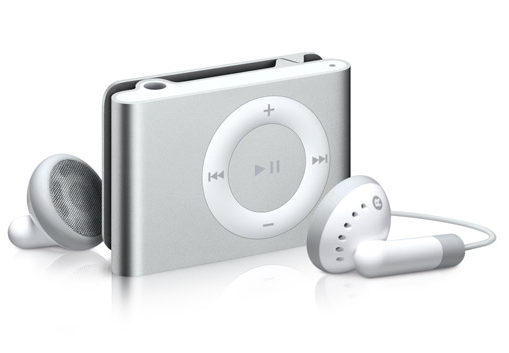 The new iPod Shuffle – This one is the world’s first ever talking iPod! Although, iPod Shuffles have always been small in size, Apple has now outdone itself by creating a very small iPod Shuffle (nano) that has been given the capacity to talk and has much more storage room than its predecessor.

This tiny 1.8” tall and 0.3” thin and sleek gadget comes with increased storage of 4GB that allows you to store more than 1000 songs and create multiple playlists; one for the gym, one for driving, one at home and for any other mood you choose. Apple achieved this feat by removing the controls from the iPod Shuffle itself and creating a unique touch by transferring them to the right earbud cord. This not only makes the iPod smaller in size but also easier to access and allows users to activate features they need without having to stop what they are doing. Some of you may consider it a disadvantage – the fact that you will have to use the headsets that Apple provides with the Shuffle because of the controls being fixed on them; unless Apple comes up with water-resistant headphones in different hues and forms.

Just like all other iPod Shuffles, this one also has no display; however, the new feature, VoiceOver eradicates the need for a display. It tells the user what song is playing as well as give the name of the singer. It also announces the playlists that are available and this helps in switching playlists with ease, without having to look at the iPod to do so. The voice that is heard depends on the type of computer being used. The VoiceOver has been programmed to use over 14 languages, allowing users to listen to different songs from the world over – Spanish or Chinese anyone?

Music can be loaded through iTunes as usual and iTunes 8.1 is needed on Mac OS X 1.4 or 10.5 or Windows XP SP3 or Vista. The iPod Shuffle can be connected to the Mac or PC using the cable that is provided and iTunes will set it up. You can also just drag songs in and out of the playlist.

This iPod also tells you and gives a warning when the battery needs to be charged. The battery, according to Apple lasts 10 hours. But the problem could be when it comes to replacement of the battery, as it costs as much as $49, which is considered by many as a very steep price to pay. Could it be that the iPod Shuffle is designed to be a disposable product? Who would want to spend almost $50 on just the battery?

Overall, the new improvements in the iPod Shuffle are definitely something to talk about; the VoiceOver, multiple playlists, the huge capacity etc. But many users are showing their displeasure at having no buttons on the iPod itself. It may be fun to have no buttons as that makes it a unique piece but it’s difficult for people to unlearn what is learnt with the previous iPods. Another major factor that contributes to this dissatisfaction is the use of cheap earbuds by Apple, which they say are not at all comfortable to use. The absence of any third-party options makes it difficult and is considered to be a deal-breaker; in spite of the fascination the new iPod Shuffle has been received with.

The new iPod Shuffle is available in smart colors of black and silver and they are easy on the eye. The look and the features make this a great gift too, as you can engrave whatever name and message you want on it.

Bigger Than iPod Touch And Smaller Than The Mac!