How Body Fat Affects Our Brains!

With the lifestyles we lead and our dietary habits, piling on pounds as we grow older, is inevitable. Some of us even tend to take it easy, having gotten used to carrying all that baggage around.

I was browsing a weight loss forum the other day and read a post by a woman who is overweight and loves it – because her face looks healthy and glows when she is plump and it doesn’t look as attractive when she loses a few pounds.

What can you say to such people? The reason for this line of thinking is because most people don’t really know the numerous problems that excess fat in the body causes.  For most, it is just an appearance issue.  What they don’t seem to understand is that overweight is a medical concern and can seriously affect their health.

We read of the many health problems associated with overweight.  They are arthritis, heart disease, diabetes, high cholesterol, fatty liver, sleep apnea, asthma, high blood pressure, gallstones, mood, depression and energy levels, all of which impact the quality of life.

If you’re thinking, you know it all, you cannot be more wrong.  I thought I knew everything until I read an article in the news.  I always worried about gaining weight and the possibility of diabetes, which could lead to kidney failure or some such horrible problem.

But what I read was scary and it is sure to motivate you to keep the bulge at bay from now on.

Scientists who are involved in researching problems associated with weight are of the opinion that there’s something more dangerous and critical happening inside our body; especially in one of the main organs of our body – our brain.

They have found that excess of body fat can lead to shrinkage of the brain, making us much more vulnerable to cognitive problems, and possibly dementia.  Such people are at increased risk of memory problems, visual or sensory disturbances, inattention, problem solving, gait problems or speech difficulties among others.

In our society, the incidence of Alzheimer’s has been on the increase for many years and this is attributed to the stress we encounter in every aspect of our lives, at home and at work.  Mental health decline is by and large the scariest as it leaves people at the mercy of others.

As part of the study, 94 elderly people who did not have dementia or other cognitive impairments were followed for five years.  It was seen that the brains of overweight people looked eight years older and those of obese people were 16 years older when compared to their leaner peers.  People with a larger body mass index had smaller brains because they had less brain tissue.  Most of the lost tissue was in the frontal and temporal lobes, which are important for planning and memory.

It’s early days yet to really know whether this would surely lead to dementia, but a smaller brain is indicative of destructive processes and there is the increased risk of Alzheimer’s, according to researchers.

Scientists say the reason for the shrinkage could be because excess body weight increases the possibility of clogged arteries, thus reducing blood supply to the brain cells, resulting in brain cell death and shrinkage of the brain.

According to a professor of neurosurgery and director of the University of South Florida Center for Aging and Brain Repair in Tampa, “We all lose some tissue as we get older and they’re saying this is being accelerated.”

This is said to be the first study of its kind showing physical evidence in our brains that links obesity and overweight with cognitive decline.

Unfortunately, we are part of the “obesity epidemic,” and this is a problem that affects all age groups, including kids. Statistics reveal that more than 60 million Americans are now obese, while another 36 percent come under the overweight category.

It’s time to understand that obesity affects every organ of our body and everything within our body is linked.  We are what we eat.

We’ve ravaged our body and all it has to offer, and the time for reparation is now. What happened to the concept of balance in everything?  Yes, including food.

Haven’t we seen our grandparents and parents suffer from Dementia? I hope we learn the lesson while we still can. 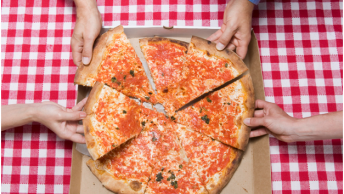