Mystery Of Hair Graying And Skin Wrinkling Finally Ironed Out!

The mystery of why hair loses color and why our skin wrinkles, which has evaded scientists so far, has finally been solved.

These two factors have for long troubled all those who dread growing old – the graying of hair and the wrinkling of skin.

For the first time, researchers have been able to fully analyze the molecular mechanics that lead to the discoloration of hair and identify genes responsible for changes in our skin.

The Secret Of Gray Hair

Scientists discovered that the chemical hydrogen peroxide (H2O2), which is also known as a bleaching agent and is produced during metabolism in small quantities all over the body including the hair, is responsible for the graying. The presence of this chemical in the hair obstructs the production of melanin, which is the color pigment that gives color to the hair.

As we age, there is a build-up of hydrogen peroxide in hair. This happens due to the body’s inability to break up this chemical into its constituents, oxygen and water, because of a shortage of the enzyme catalase – also a victim of the ageing process. This shortage of catalase, in turn, obstructs the functioning of another important enzyme, so much so that melanin is no longer produced. With this, a general domino effect comes into play, resulting in the gradual loss of pigment all along the entire length of the hair – from the root to the tip.

Scientists from the University of Mainz in Germany and the University of Bradford in Britain, working together in this research have laid the foundation for a future therapy against graying hair, in the form of a tablet or an ointment that can make up for the shortage of catalase.

The results of this research are also expected to improve treatment of other pigment problems, like leucoderma or vitiligo.

Beauty is gene deep! Scientists finally claim to have found the culprits – 1,500 genes – that control the length of time we can retain our youthful looks.

Not too long ago, this sort of a breakthrough was unthinkable, as it was considered an almost impossible task to ascertain the relationship between the functions of hundreds of genes involved. However, the techniques that were used to collect and analyze huge amounts of genetic data for the Human Genome project have helped researchers solve this problem.

The Human Genome project is a 2 billion pound global effort to decipher human DNA – to try and analyze one of the deepest mysteries of the beauty industry: why some people age faster than others.

Principal scientist in the global biotechnology division of P&G Beauty, says, “The human genome project has made it possible for us to analyze aging right down to the hundreds of genetic changes that happen in our skin as we get older.”

Our skin ages in eight different ways, each controlled by its own “battalion” of genes.

One of the pathways for aging and the most important is hydration. It is through this process that the skin collects and retains its moisture levels. Moisture is absorbed by the skin with the help of molecules that bind water into the skin. These molecules are produced by a certain type of genes. As skin ages, the genes that produce these molecules become less active, thus because of the reduction in molecules, the ability to retain water in the skin reduces, leading to wrinkles. Previously, this process was thought to be fairly simple but researchers have found that up to 700 genes could be responsible for this process.

Another pathway involves collagen, which is a molecule produced by the skin to give strength and structure. Researchers found that as people age, the genes that destroy collagen become extremely active, which in turn causes the development of lines and wrinkles on the skin. About 40 genes may be responsible for this process.

A third pathway is inflammation. This process is said to involve 400 genes that become overactive with age.

This research shows how complex genetic interactivity is. Researchers have also confirmed that there are wide variations between people in terms of genetic resilience to aging. The importance of exposure to environmental factors, such as sunshine is also revealed. In aged skin that has not been much exposed to the sun, there were found to be about 3,800 genetic mutations; while in skin that has been exposed to the sun, they were about 10,000.

It is ironic how the human genome project results are a great help to the beauty industry, which is sure to make thousands of older people happy. We may in the near future have the capability to retain our youth with soft and younger looking skin and no graying of hair.

Imagine never having to go through the pain of dying your hair again or using all that makeup to cover the wrinkles.  I know for sure, these are two areas where the results of further research will be eagerly awaited by all. 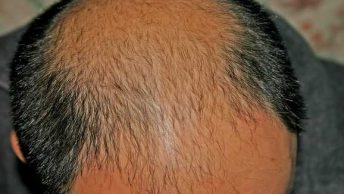 Male Pattern Baldness – Is There a Cure?