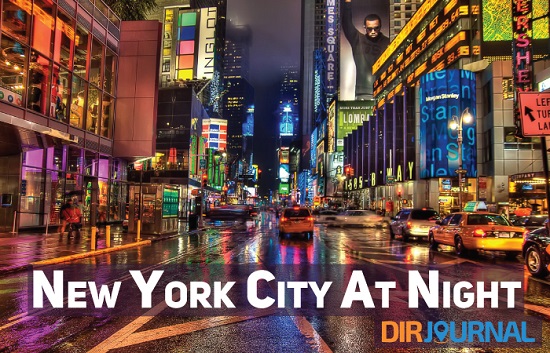 With an event, parade, exhibition or attraction seemingly taking place each and every day of the year, New York City seems to be continually changing. However, regardless of when you may a make a visit throughout the year, one aspect never changes – New York City at night.

A Black and White Big Apple 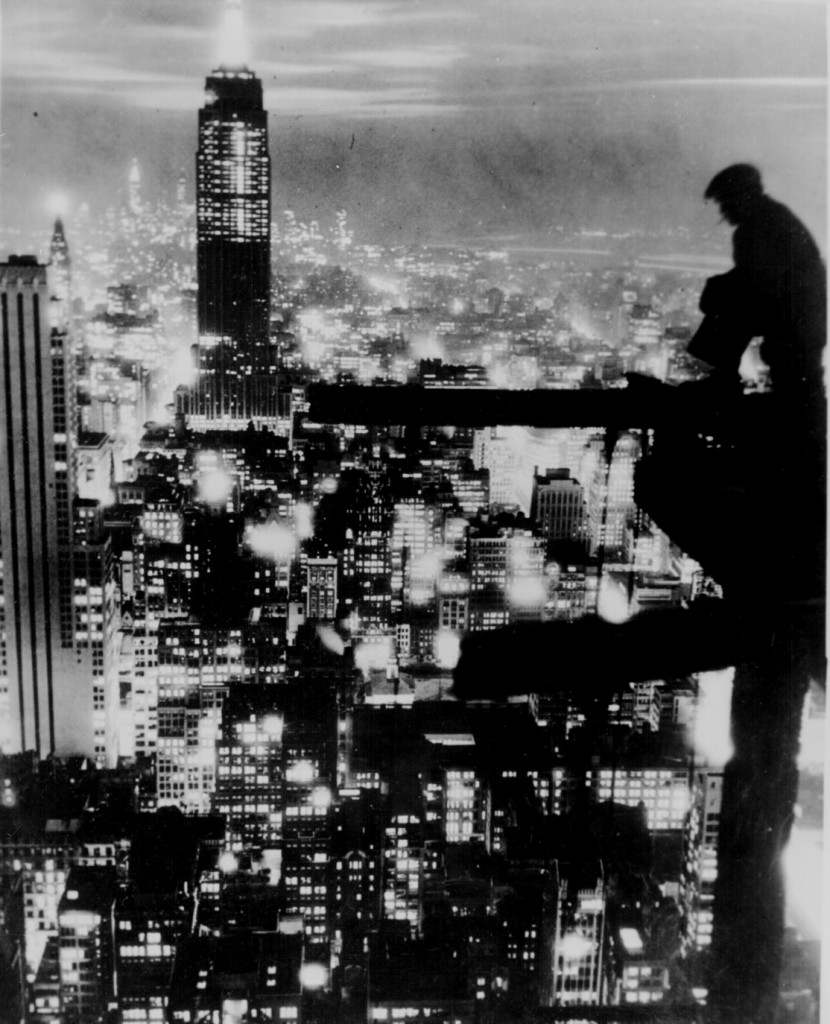 There aren’t many words or phrases other than breathtaking and awe-inspiring that can do this image of New York justice. Stirring a complete mix of emotions, from confusion as to where and how it is has been taken to intrigue of whom the mystery figure is, this is a true replication of New York City – fascinating, captivating and astounding.

Normality In The City 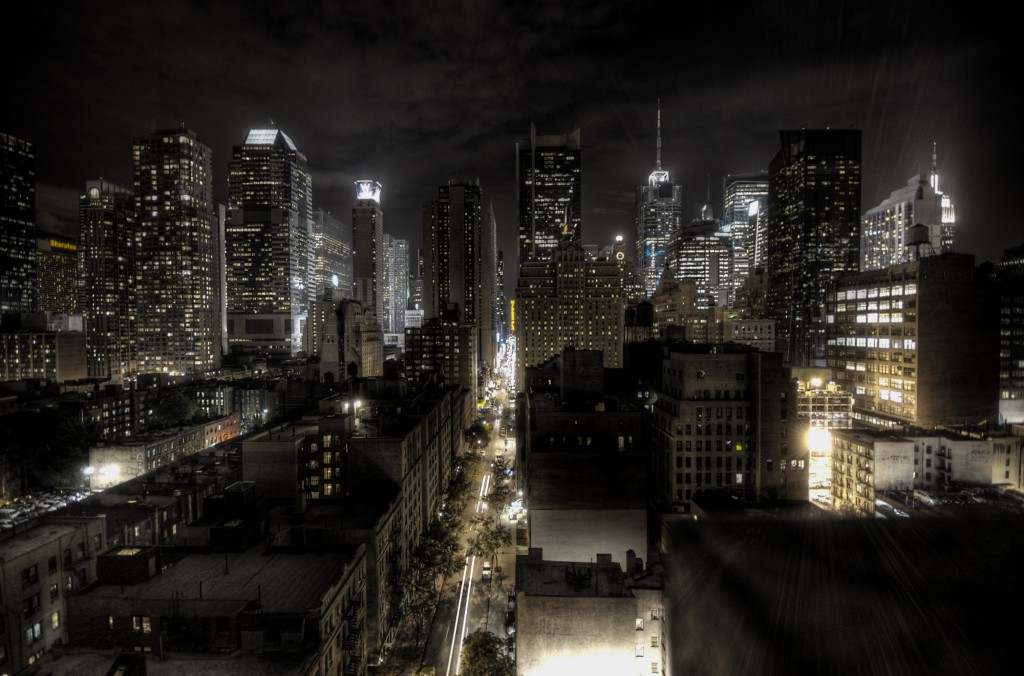 This is actually one of my favourite New York City at night photographs, not for the fact it is instantly recognisable as New York (as the rest of the pictures are), but that it shows the city as being seemingly normal – something that not very many tourists get to see.

The detail in the picture is immense (which can be truly appreciated when you click on the image to see the full version) and wherever you look, in whichever window or at the corner of whichever building, you can imagine a person carrying out normal, every day tasks in a city that can be considered anything but normal.

The City That Never Sleeps 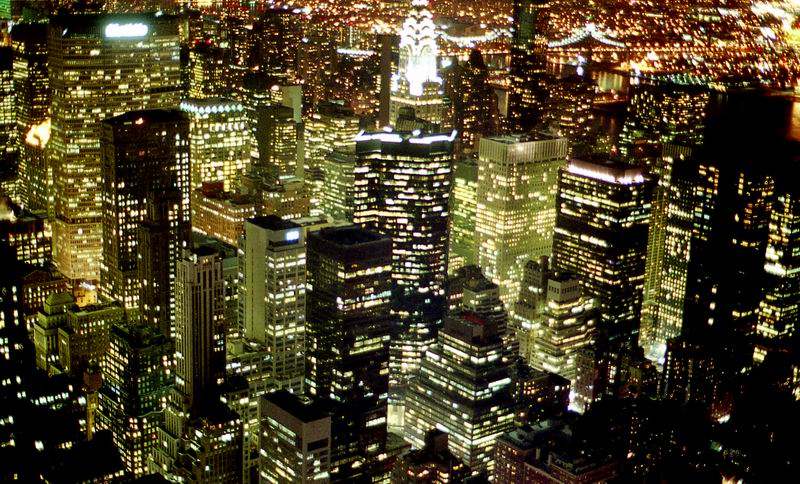 Whilst this may only be a general photograph taken by an amateur photographer, it shows perfectly how beautiful of a city New York can be at night.

With lights blazing from every skyscraper, every office block, the Chrysler building and the vague bridge outline in the background, it appears that New York is constantly alive, working and living – the perfect reason why it is so often nicknamed the City That Never Sleeps. 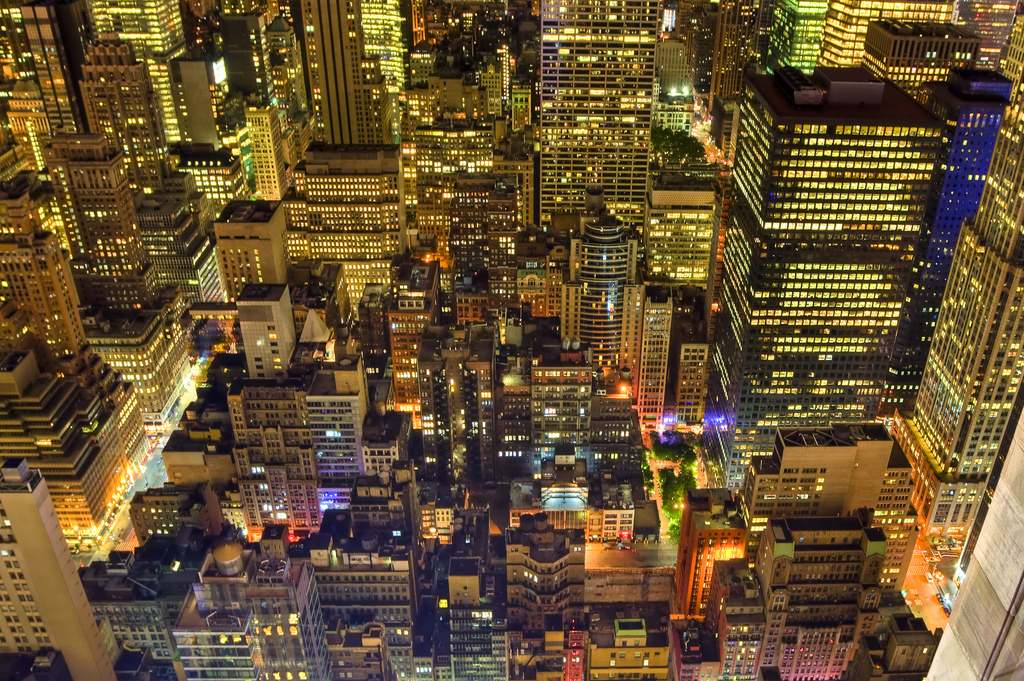 Whilst similar in terms of subject matter to the previous photograph, this superb image displays just how beautiful and colorful nighttime can be in New York.

Yellows, pinks, greens and blues all dominate this image and whilst some digital image enhancement may have been used to augment the vibrancy of the colors, for anyone stood in the same position, they would see a very, very similar image.

What is liked most about this picture is that although it is of one of the most recognisable and synonymous New York attractions, if you were unaware of this, you would not realise that the most famous city on the earth lies only a short boat ride away from this beautiful statue.

A gift to New York from France, the Statue of Liberty was presented to the Big Apple on 28 October 1886 and remains as one of the most popular tourist attractions in the whole of America, being just as beautiful at night as it is during the day. 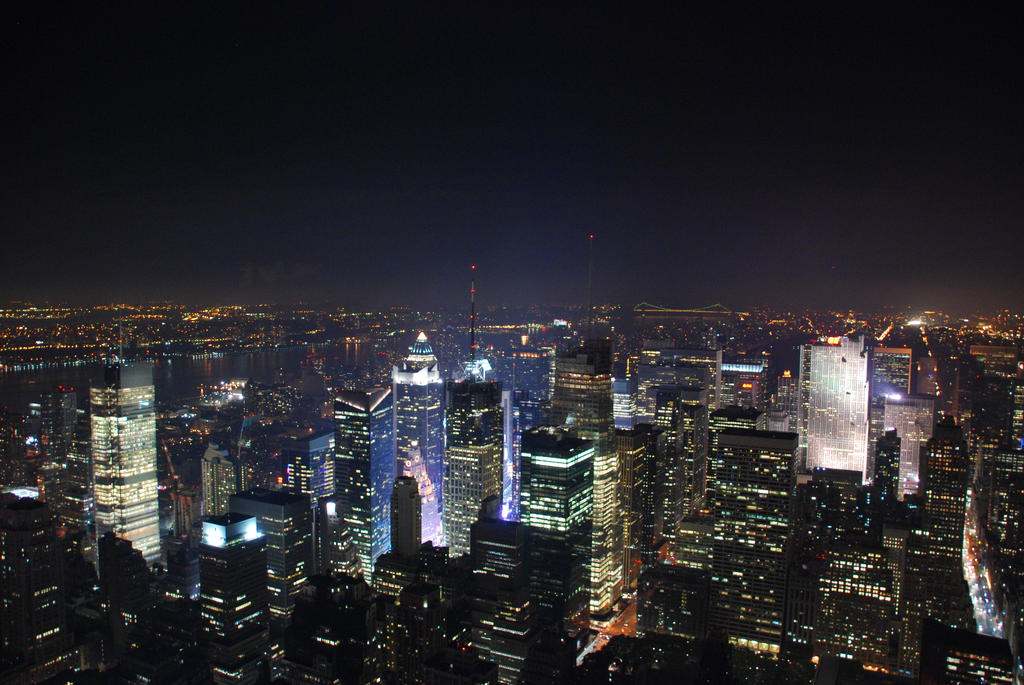 The very first thing that is noticed about this picture is not the many lights that are being displayed from all of the skyscrapers, nor the actual sheer size of the skyscrapers themselves, but the radiating glow that appears to be coming from some huge light source in the center of Manhattan.

This huge light source is actually Times Square and the many electronic advertising boards that are on constantly, 24 hours a day, 7 days a week, 365 days a year.

Under The Brooklyn Bridge 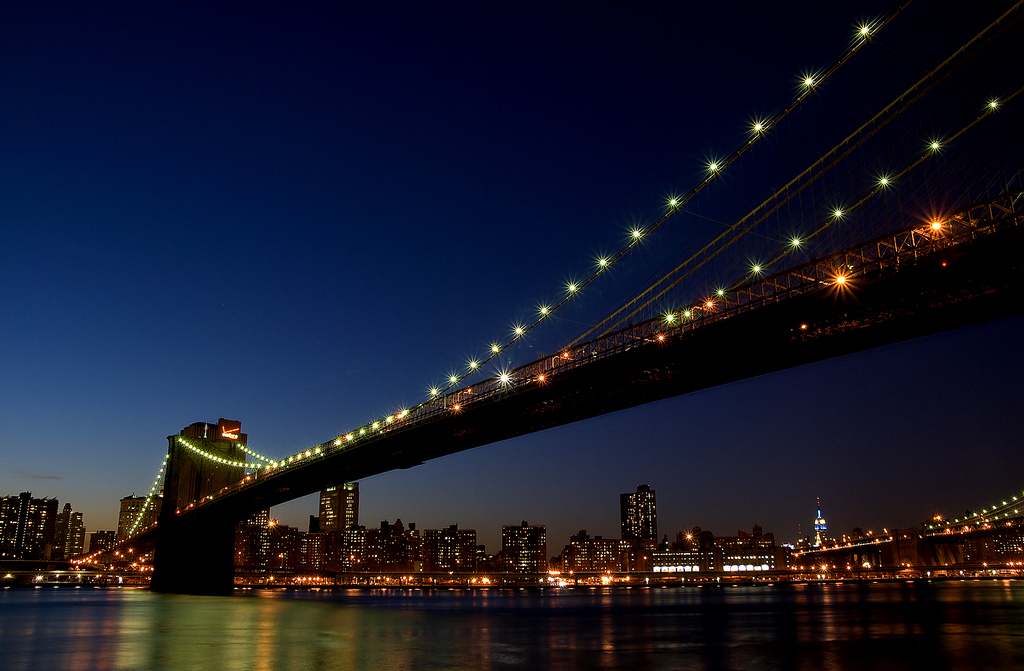 Simple and sophisticated, the lights in the foreground on the Brooklyn Bridge compliment the masses of city lights perfectly. 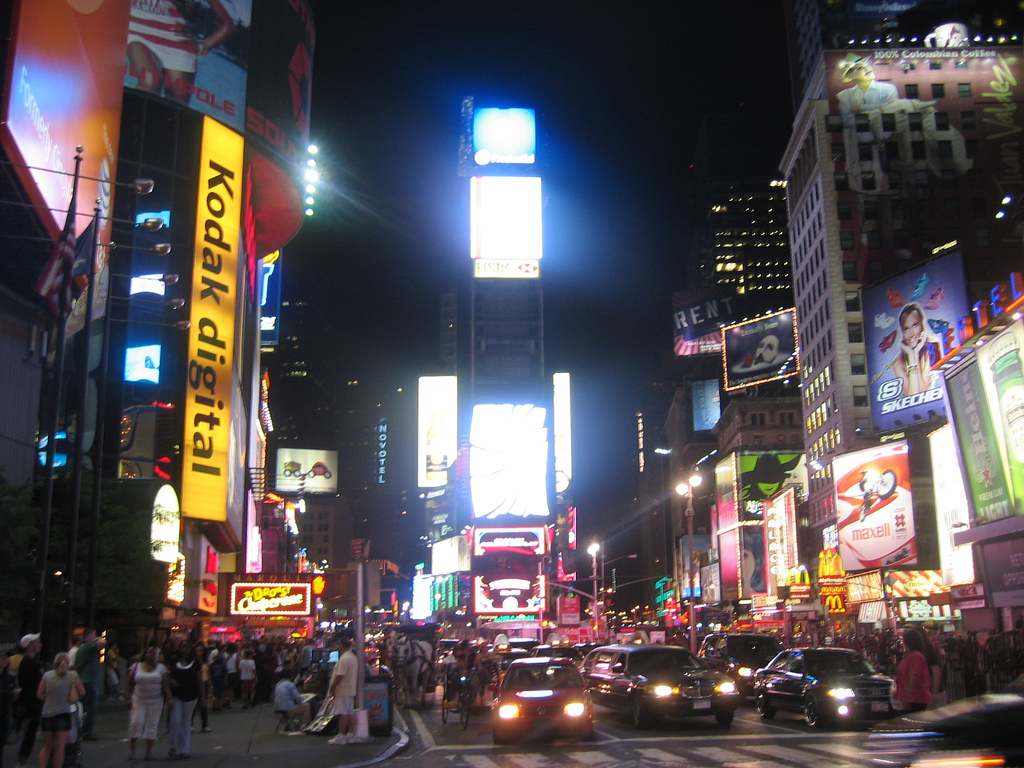 In the earlier image that showed the glow of Times Square from above, imagine what it would look like if you were down where the lights were – this photograph portrays that (and the general vibrancy of New York) perfectly.

The busyness of New York.  The bright lights.  The absolute boldness of it all.  It might not be a calm and tranquil Caribbean beach, but it is the place where millions of people choose to go on vacation each and every year.

A Mirror Of Manhattan 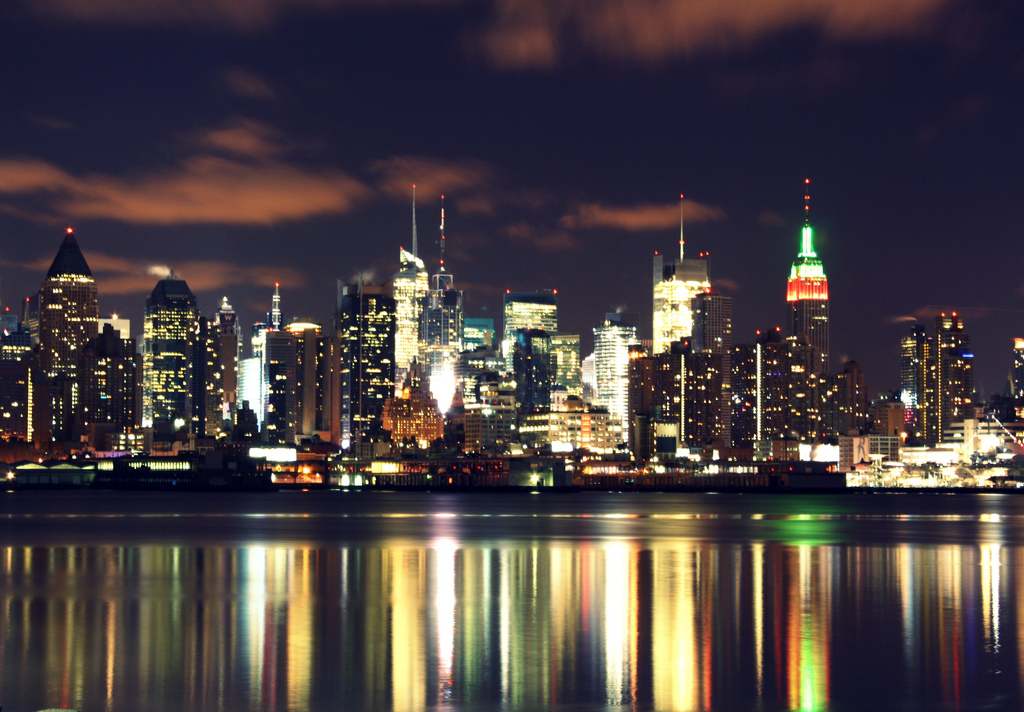 Almost everyone has seen a picture of the New York skyline, as it is so breathtaking that it can be admired by all.  This photograph of the skyline, however, has something different.

Not only are the colors of the lights startling themselves, but the reflection of all of the buildings on the East River make it somewhat spectacular. 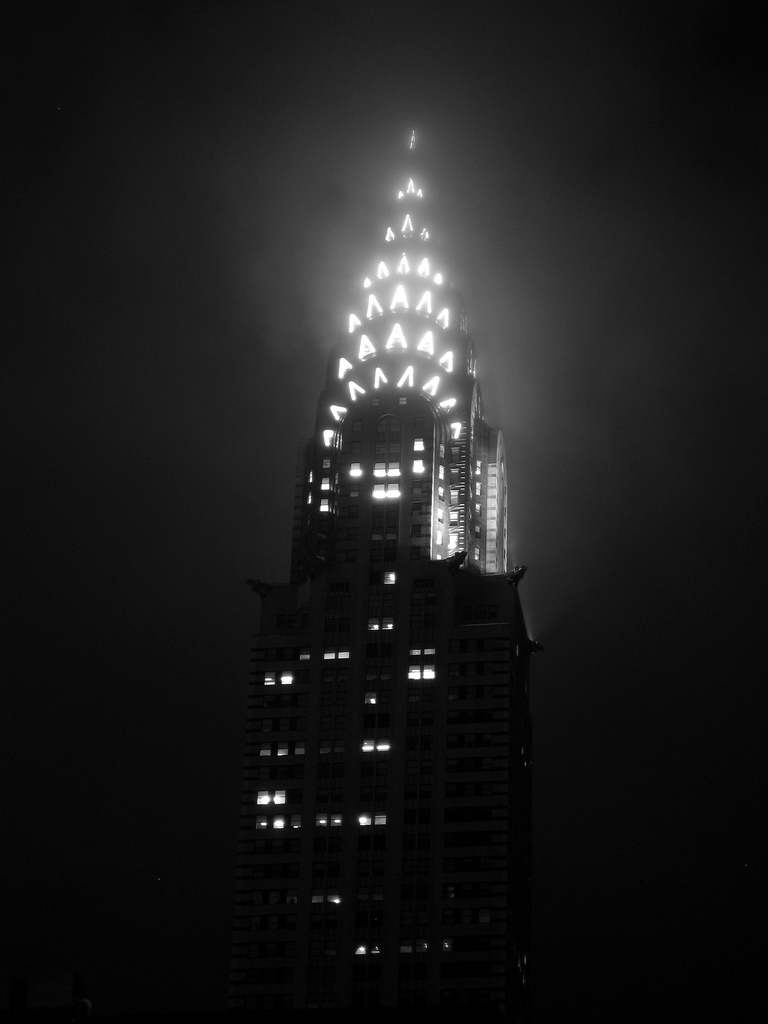 When asked to name one of the many popular skyscraper buildings in New York City, people will often respond with either the Empire State Building or the Rockefeller Center.  Whilst these are extremely popular and beautiful in their own right, the Chrysler Building is so often over looked, yet it is one of the most spectacular buildings anywhere in New York.

And this photograph proves it.