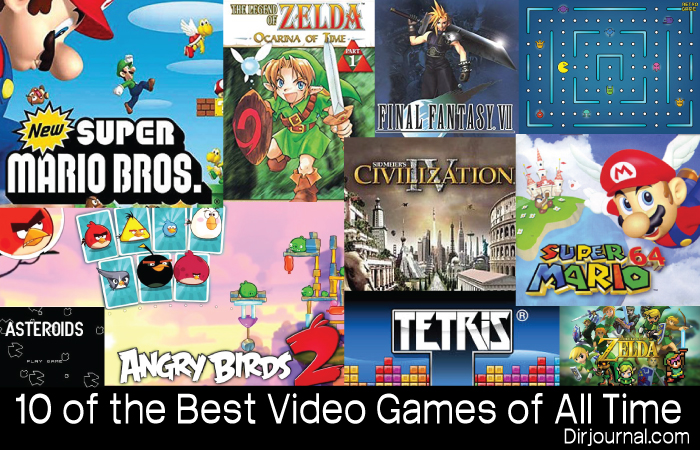 There have been many entertaining and influential video games throughout the years.  Some of these games are recognizable by nearly everyone.  In some cases video games go on to become a cultural phenomenon with spin-off games, toys and clothing items based on them.  The best games combine entertainment value with cutting edge technologies to keep people coming back for more.

It is hard to narrow down the choices but here are a few of the best video games of all time. Well, at least they’re some of the best games to me. You see, I always hesitate to do these top lists because they’re inherently subjective. These are some of the games that were my firsts, my favorites, or ones that still capture my attention today. Some — like first person shooters — don’t appeal to me, so you won’t find them heavily represented here.

Your list probably won’t match mine. You might love some of these games. You might hate some of these games. And that’s fine. If you disagree with them, what you can do is tell us about your own favorites or your own top ten picks in the comments after the article. Now, to the list — in alphabetical order. (Note: For the purposes of this list I’ve included console, PC, and mobile games.)

Angry Birds is one of the biggest hits created for a touch-screen platform.  It was first released for Apple devices in December 2009.  Other versions were soon created for different devices.  It is a strategy puzzle game that has been downloaded more than 1 billion times.  It was made by the Finnish game developer, Rovio Entertainment, and the continuous expansions have kept up its popularity.

Asteroids is a game where the object is to shoot asteroids and space ships without being hit by their shots or crashing into one. It was released by Atari Inc. in 1979 — before I was even born.  The arcade version of the game was released a couple of years before the Atari 2600 version.  Asteroids is Atari’s best-selling game of all time, and it influenced many later games. This is the only one on my top list that wasn’t a personal favorite. I’ve included it more because of the addictive nature it had on family and friends growing up.

Civilization IV is a computer game that was released in 2005.  It is a turn-based strategy game (one of my favorite kinds) where the object is to build an empire starting from a small amount of resources.  It was developed by Firaxis Games and sold over 3 million copies.  One thing that separated it from earlier games in the series was that players were able to make more modifications to the game.  It has been praised by many critics and received high ratings and multiple awards when it was released. While I own both Civ IV and Civ V, IV remains my favorite.

Final Fantasy VII was a success immediately after its release, selling many copies and being highly praised by critics.  It was developed by Square and published by Sony Computer Entertainment for the Sony Playstation in 1997.  It was later released for computers with Microsoft Windows.  Final Fantasy VII is a largely menu-based roleplaying game and is credited with popularizing roleplaying games outside of Japan.  It sold more than 10 million copies. I was never a big fan of the Final Fantasy franchise, but I gave this one a try thanks to my ex’s addiction to it, and it was the only one I personally could get into.

The Legend of Zelda is the first game in the Zelda series and was originally released in Japan in 1986.   The game looks down on Link from an overhead view as he travels around trying to find the pieces of the Triforce in order to save the kingdom.  It was the first Nintendo Entertainment System game to sell over 1 million copies and has since been re-released on many platforms. This game is my #1 all-time favorite.

6. Legend of Zelda: Ocarina of Time

Legend of Zelda: Ocarina of Time was developed and published by Nintendo for the Nintendo 64 as a completely redesigned 3D installment in the Zelda franchise.  It was originally released in 1998 followed by versions for Nintendo GameCube, the Wii Virtual Console and an updated version for Nintendo 3DS.  It was twice named the highest-rated game of all time by Guinness World Records.

I almost feel silly including this in my list, but Pac-Man is one of the most widely known games of all time.  It became not only a game but a pop-culture icon.  Pac-Man was first developed by Namco and released in Japan in 1980, then in the United States later that same year.  It was published by Midway in the U.S.  It has appeared on a variety of platforms over the years, with numerous spin-offs.

Super Mario Brothers is the original Mario game released by Nintendo in 1985.  It was made for the Nintendo Entertainment System as a sequel to the 1983 arcade game.  The player controls Mario as he travels through the Mushroom Kingdom to rescue Princess Toadstool.  A second player can join in and play as Luigi.  The game has of course been very influential, as seen by the numerous later versions and the many games that were designed with the same style.  There was also a television series and movie based on Super Mario Brothers. This was the first game I ever played from start to finish. And I still remember the first time I beat it, when my little brother (probably no more than six or seven years old at the time) kissed the picture of the princess on the screen after she was rescued.

Super Mario 64 is a later game in the Mario series that was one of the launch titles for the Nintendo 64.  It was released in 1996 and was one of the earliest video games where the player could move in all directions.  Like previous Mario games the object is to rescue the Princess from Bowser.  In Super Mario 64 Mario wanders around Princess Peach’s castle and jumps through paintings to enter worlds where there are multiple challenges to earn stars.  The year it came out it received awards as the best game of the year.

Tetris is an extremely popular game that has been released on many platforms since the original came out.  I suppose it appeals to my love of puzzles and good old mindless entertainment. I could play for hours without realizing the time was passing by. It was designed and programmed by Alexey Pajitnov and released in the Soviet Union in 1984.  The object is to fit different shaped pieces together to form solid rows.  It is available on nearly every platform that can play video games.  The Game Boy version that was released in 1989 made it one of the most popular games of all time.  More than 100 million copies were sold on cell phones alone.

This is, of course, only a small sample of the many great video games that have been released. Some of my own favorites didn’t even make the cut. How about yours?  What are your top games of all time?  Tell us in the comments.