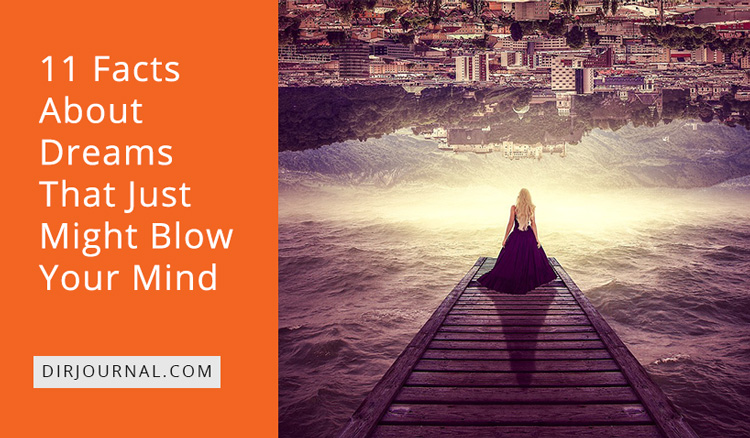 11 Facts About Dreams That Just Might Blow Your Mind

Dreams are a mystery for most people, leaving us with tons of questions. Why do we dream? What do our dreams mean? Why don’t we always remember our dreams?  Yes, dreams are very strange, but through much research, scientists have discovered several unexpected facts about dreams. Are you ready to have your mind blown? Then check out the following facts about dreams that you likely never knew.

1. You Have Several Dreams Per Night But Don’t Remember Them

If you’re like most people, you probably wake up remembering only one dream–if that. But truth be told, you likely have an average of 4 to 7 dreams each night. That adds up to about 100,000 dreams–or six years of dreaming–in your lifetime.

Here’s the thing: you’ll wake up forgetting 95 percent of your dreams, says dream researcher J. Allen Hobson. And if you think you’re one of those people who just doesn’t dream, you’re kidding  yourself. Everybody dreams, including babies and animals. Some people are just better at remembering their dreams than others are.

Scratch what I just said. Pretty much everyone dreams. However, in rare cases some people with serious psychological disorders won’t ever dream. At least that’s the theory.

Dr. Patrick McNarama has another theory. When measuring sleep patterns, everyone enters into REM sleep, the stage where dreaming occurs. It’s thought that people with personality and psychological disorders may not actually dream, but Dr. McNarama says these people may just be awful at remembering their dreams or are simply flat-out liars.

Most of us see our dreams through images, but dreams can be equally vivid through our other senses. Instead of dreaming in pictures, people who were born blind dream through other stimulating experiences like sound, touch, and smell. People who were born with vision and became blind later in life can still experience visual dreams.

4. You Never Invent a Face in Your Dreams

Have you ever had a dream starring a mysterious man or woman who you’re sure you’ve never met? Chances are you’ve seen his or her face before. In fact, I’m sure of it. When we see faces in our dreams, we draw on those that we already know instead of inventing new ones. Since you’ve likely seen thousands of faces before, you have a virtually endless supply of faces to choose from to put to the characters in your dreams.

If the face seems new, it’s probably someone you passed on the street but don’t remember. And those times when you have really weird dreams about someone you’re close to? Your mind is simply applying that face to the character in your dream.

5. There’s a Correlation Between TV Color and Dreams

Back in the early 1900’s, studies showed that most people dreamed in back and white. When color TV became popular, more people reported dreaming in color. One study looked at this correlation and found that people who grew up watching black and white television dream in monochrome more often than those raised watching color television.

6. You Can Train Your Mind to Control Nightmares

Have you ever experienced a lucid dream, one where you knew you were dreaming and could control the outcomes? Turns out you can actually teach yourself to do that, says dream researcher Kelly Bulkeley. This is an especially helpful tool when you experience reoccurring nightmares.

Dr. Bulkeley says that you can give yourself a pep talk before going to bed, reminding yourself that it’s just a dream. If you tell yourself that you’ll remember you’re dreaming before you enter the dream, you have a better chance of recognizing the dream and controlling it, much like the characters in Inception trained themselves to do. In fact, there are groups of people who practice techniques to become lucid dreamers.

Calvin S. Hall collected over 50,000 dream reports at the Case Western Reserve University in Cleveland, Ohio in the 1900’s. Part of his findings showed that people more often dream about negative emotions than positive ones. The most common emotion: anxiety. His findings also showed that people often dream about misfortune over good fortune and aggression rather than friendliness.

When it comes to the way men and women dream, there’s actually a divide in the types of characters they dream about. When men dream, their characters are on average 70 percent men. Women dream equally about both genders. While there’s a difference there, there’s not a difference when it comes to sexual dreams as you might expect. Men and women both dream about sexual themes equally often–and both can have wet dreams.

Most of the time people enter into a paralyzed state when dreaming. This keeps you from acting out your dreams. In some cases, this state of sleep paralysis can go wrong. Some people may wake up unable to move for several minutes, and others don’t always enter a paralyzed state and will move their body in the same motions they’re performing in their dream.

When you wake up from a dream, that’s usually it. It’s over. But sometimes people feel they’ve awakened from a dream when they’re actually still dreaming. Instead of waking up, they’ve simply entered into another vivid dream. This phenomenon is called “false awakening.”

Think these dream facts are weird? Tell us in the comment section which one shocked you most.