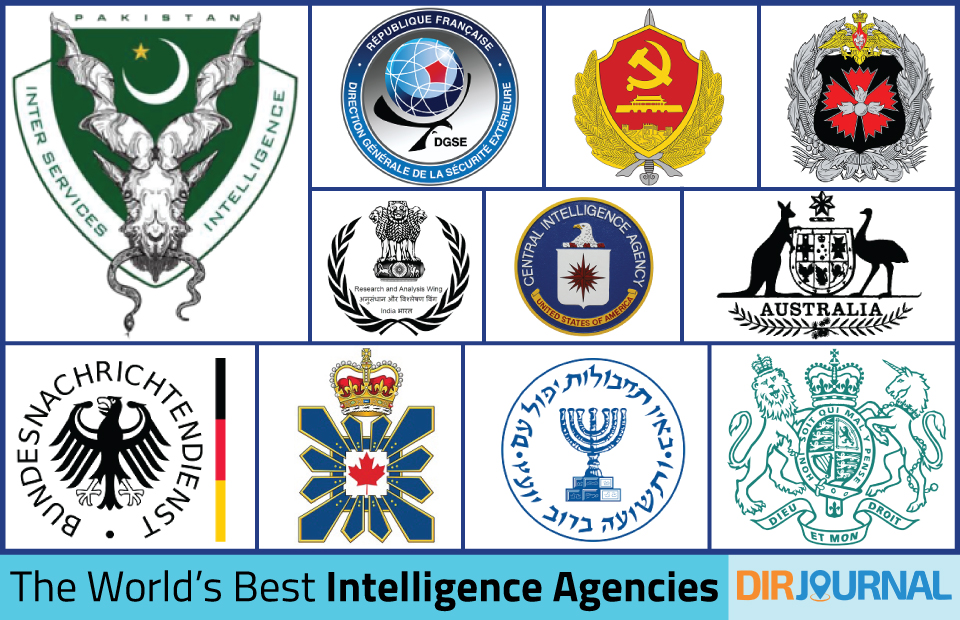 Nearly every country in the world has an agency charged with gathering, processing, and analyzing information from around the world. They maintain national security and protect their countries’ interests in all aspects – economic, political, and military. But which countries have the best intelligence agencies in the world?

What are the best intelligence agencies in the world?

Some of these agencies have agreements to share information with others for greater impact. Others are extremely secretive and make it a point to share with no one.

Countless countries have spies scattered across the globe to gather intelligence. But information about who these spies are and exactly how they operate, is – naturally – highly classified.

Still, it is possible to estimate which countries maintain the best intelligence agencies in the world.

Who operates most effectively? Most secretly? Whose spies are the most deadly? The most ruthless? Who has the best technology? Keep reading to find out.

Authorities founded the agency after the Indo-Pakistani War of 1947-48, which had revealed critical intelligence shortcomings. The ISI consists of officers from different branches of the armed forces – the Army, Navy, and Air Force.

The current head of ISI is General Faiz Hameed. He has held the position of Director General since June 2019. This is the only position of the entire agency that is overt. Since 1971, only three-star army generals have occupied the post. Ostensibly, the agency reports directly to the Prime Minister and the Army Chief.

In the 1980s, the ISI gained global fame during the Soviet-Afghan War. Working closely with the CIA, the agency helped prop up the Afghan mujahideen against the Soviet Union. Since then, it has been embroiled directly and indirectly in terrorism controversies in the region.

In the 1990s, the ISI provided intelligence and strategic support to the Taliban during the Afghan Civil War to counter India’s influence in the region. Officially, it changed allegiances after 2001, though reports have indicated continued support of the Taliban.

According to intelligence experts, what gives the ISI an edge is its unpredictability and lack of transparency. Both these traits naturally draw international criticism. Former Pakistani prime minister Benazir Bhutto once characterized the agency as a “state within a state”.

Not only does the US maintain one of the top armies in the world. It can also boast several of the best intelligence agencies. What sets them apart is their use of carefully guarded, cutting-edge technology.

In total, the United States’ Intelligence Community (IC) consists of 16 separate agencies. The most notable and recognizable among them are the Central Intelligence Agency (CIA), the National Security Agency (NSA), and the Federal Bureau of Investigation (FBI).

The CIA focuses on gathering, analyzing, and providing overseas intelligence for the President and Cabinet of the United States. It was created in 1947, as a successor to the World War II Office of Strategic Services (OSS). In particular, the CIA relies on the use of human intelligence – meaning spies.

In contrast, the NSA’s main advantage is its technical prowess. The agency is responsible for intercepting and deciphering foreign signals while protecting the information systems of the United States – at least in theory. In 2013, it was the center of an international scandal. That year, whistle-blower Edward Snowden revealed that the NSA had eavesdropped on millions of Americans, as well as foreign allies.

Mossad is an abbreviation for HaMossad leModiʿin uleTafkidim Meyuḥadim, which translates as ‘Institute for Intelligence and Special Operations’. It is the national intelligence agency of Israel.

Founded in 1951, it operated in secret until the mid-1990s. The agency’s main areas of focus are intelligence collection, covert operations, and counter-terrorism.

What makes Mossad stand out is that it is entirely separate from Israel’s democratic institutions. No law defines its roles or purpose. What’s more, it’s exempt even from the constitutional laws of Israel. The agency answers only to the Prime Minister. Consequently, international observers have described it as a deep state.

The Secret Intelligence Service (SIS) of the United Kingdom has a long history. It actually dates back to 1909, making it one of the oldest intelligence services in the world. More commonly, the SIS is famous under its alias, MI6 – the agency for which James Bond works in Ian Fleming’s famous novels.

Like most other services on this list, MI6 focuses on external threats, from nuclear weapons to organized crime. Internal threats to national security are within the purview of a different agency, MI5.

The organization’s headquarters are in London and its annual budget is estimated at £3 billion.

The Bundesnachrichtendienst (BND), is Germany’s foreign Federal Intelligence Service. Its headquarters – the world’s largest of any intelligence agency – are located in Berlin. Overall, the BND has over 300 locations within Germany and abroad. It answers directly to the German Chancellor’s Office.

Since its foundation during the Cold War in 1956, the West German BND cooperated closely with the CIA. During these years, intelligence experts regarded it second only to the the American agency.

Today, the BND is an early-warning system to alert German leaders to foreign threats to national security. It excels in technology, relying heavily on electronic surveillance and wiretapping. From terrorism and organized crime to drug and weapons trafficking, the BND gathers both military and civil intelligence.

In the mid-1960s, the agency saw criticism after it became public that it contributed to the kidnapping and presumed murder of a Moroccan revolutionary living in Paris.

Today, its primary focus is on gathering intelligence from foreign sources to assist in military and strategic decisions for the country. It is especially renowned for economic espionage.

The DGSE headquarters are located in Paris’ 20th arrondissement. In total, it employs more than six thousand people.

In this framework, the GRU has run several global hacking campaigns. Targets have included institutions from anti-doping bodies to nuclear power companies. Most notoriously, international exports believe that the GRU was involved in cyber attacks during the 2016 US presidential election.

Russia runs two other prominent intelligence and security services – the Foreign Intelligence Service, or SVR, and the Federal Security Service, or FSB. Both emerged from the Soviet-era KGB.

The current intelligence agency of China, the Ministry of State Security, has existed since 1983.

Its gathers intelligence on those that could be seen as enemies with the goal of overthrowing or otherwise dismantling the socialist government of China. As such, it plays a major role in censoring China’s internet, cutting off the country’s population from the outside world.

The MSS has over 100,000 intelligence personnel operating both within China and scattered throughout the world. Headquarters are located Beijing. Overall, the MSS has 17 known bureaus or divisions, including a counterintelligence division and a social research division.

The Canadian Security Intelligence Service (CSIS) gathers intelligence on threats to Canada’s national security. Since its foundation in 1984, it has conducted operations, both covert and overt, domestically and abroad.

From its headquarters in Ottawa, the CSIS answers to Parliament and the Minister of Public Safety. It works closely with intelligence agencies from other countries, including the United States. In 2020-21, it has a budget of $651 million.

The agency has faced criticism several times. In the 1990s, it was accused of spying on Canadian citizens.

More recently, the CSIS has been criticized for fostering homophobia and racism.

The Australian Secret Intelligence Service has its founding date in 1952. For more than twenty years, the existence of the agency was a secret even within the Australian government. The public only learned about it in 1972,  when the Daily Telegraph ran an exposé about spy recruitment at universities.

ASIS forms part of the Australian Intelligence Community. Similar to the CIA, it collects foreign intelligence, counter-intelligence, and liaising with the intelligence agencies of other countries. In particular, its focus lies on gathering intelligence from the Asian and Pacific regions using agents stationed in a wide variety of areas.

Founded in 1968, RAW’s main objective is to gather foreign intelligence, particularly about India’s neighbor, Pakistan. Throughout the years, Pakistan has continued to be a primary target of its intelligence gathering efforts.

Estimates say that RAW employs more than eight thousand field agents in various locations throughout the world. The agency also coordinates with other intelligence agencies. In particular, it regularly communicates with the CIA and Mossad in regard to monitoring Pakistan’s nuclear program.

Pictures are courtesy of creative commons.

Note: This post was originally published on May 5 2010. We have since updated it.