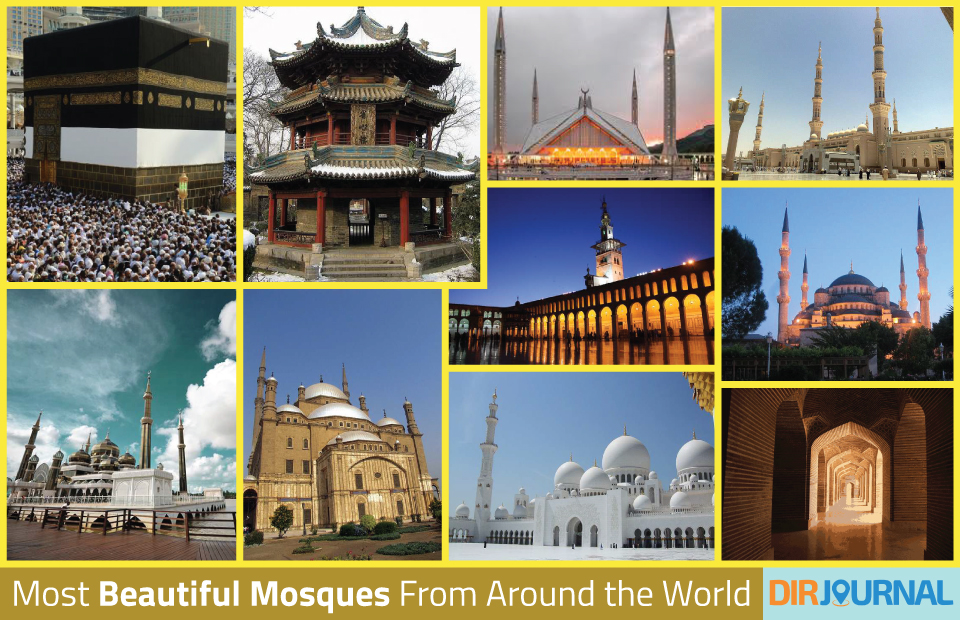 Mosques are some of the most stunning pieces of architecture that people have ever built. But you don’t need to take my word for it. Let’s take a look at some of the most beautiful mosques in the world as examples.

This architectural gem in Istanbul, Turkey actually takes its name from Sultan Ahmed I, in whose reign it was build from 1609 to 1616.  However, it’s popularly known as The Blue Mosque because of the characteristic blue tiles found in the interior. The building has six minarets, one main dome and eight smaller domes.  Part of its beauty is the architecture, a combination of Byzantine elements with traditional Islamic elements.

The Crystal Mosque is located in Terengganu, Malaysia.  It’s a new addition to the list, as it was built between 2006 and 2008 and officially opened in February 2008.  This stunning structure is constructed from steel, glass and crystal, which make it one of the most graceful in the world. On top of its own beauty, it sits in one of the planet’s most beautiful spots.

The Faisal Mosque is located in Islamabad and is the largest mosque in Pakistan, and the world’s sixth largest.  On its completion in 1986, it actually was the biggest in the world.  The Faisal Mosque has four minarets but lacks the typical round dome, giving it a unique look.

Not only is the Great Mosque of Xi’an one of the most beautiful mosques in the world, it is also amongst the oldest.  While it was founded in 742 in the Shaanxi province of China, the current structure was built between 1368 and 1398 and renovated many times since then.  Instead of having the traditional elements of mosque architecture such as domes or minarets, it is much more in line with traditional Chinese architectural elements.

For other architectural wonders of Asia, check out this article: Castles, Palaces and Forts in Asia

Masjid al-Haram is the largest mosque in the world and surrounds the Kaaba in Mecca, the holiest place in Islam.  Together, its outdoor and indoor areas can hold 4 million people at once.  The structure covers a total of 88.2 acres and dates back to 630. Since its founding, it underwent numerous renovations and expansions to grow to the size it is today.

Masjid Al-Nabawi is another beautiful example in Saudi Arabia, and one of the the largest in the world.  It is located in Medina and is one of the holiest sites in Islam.  It dates back to 622 and is known as the Prophet’s Mosque.  Over the centuries it has been built up and renovated many times.  It has 11 minarets and 27 domes.

The Mosque of Muhammad Ali Pasha was built between 1830 and 1857 and is also known as the Alabaster Mosque.  Muhammad Ali Pasha commissioned it in memory of his son.  It’s a massively-built example of the Ottoman architectural style. It features 5 main domes and 2 minarets.  One unique aspect of the building is a brass clock tower that Muhammad Ali Pasha received as a gift from King Louis Philippe of France.

The Shah Jahan Mosque in Thatta, Pakistan dates to the 17th century.  The commissioner was Shah Jahan, a Mughal emperor. He is responsible for the Mughal architectural style, which makes it stand out from many other designs. It has 100 domes and is famous for its characteristic red brick and tiles.

Sheik Zayed Grand Mosque, Abu Dhabi, is the 8th largest in the world.  The first ceremony that took place inside was the funeral of its namesake, Sheik Zayed bin Sultan Al Nahyan. He initiated its construction while serving as President of the United Arab Emirates.  Some of the world’s best artisans used materials from around the globe to create this stunning structure, which has 82 domes and 4 minarets.

This intriguing jewel of architecture carries another popular name: the Great Mosque of Damascus.  The site is significant to both Christians and Muslims.  Construction on it finished in 715 on the site of an earlier Christian basilica. It honored St. John the Baptist, whom both Muslims and Christians revere as a prophet.  This is one of the few old mosques in the world that hasn’t significantly changed in style and general structure since its first building.

These are just a few examples of the beautiful mosques in the world.  By no means do they represent all of them. Why don’t you help us expand this list in the comments by telling us about your favorite mosques?  What’s the most beautiful example near you? Which ones would you want to visit?