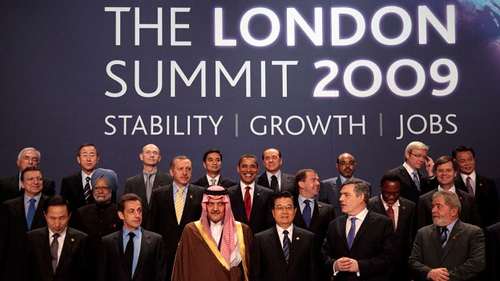 G-20 – The Coming Together Of The World’s Largest Economies!

The Group of Twenty (G-20) is a forum of central bank governors and finance ministers of the biggest industrialized and developing economies created to discuss key issues affecting the global economy.  The G-20 countries account for two-thirds of the population in the world, 80% of world trade and 90% of global GDP.

Reason for forming the G-20

In the year 1997 and 1998, the Asian financial crisis led to fear of an economic meltdown globally and the need for a platform to discuss these issues and look into the improvement was felt by world leaders.  Thus, in 1999, the G-20 was created in response to this need.

Although, there are no criteria for membership, the group has nineteen of the world’s largest economies as members. Along with the G-7 industrialized nations, the group also consists of emerging economies like India, China, Brazil, Russia, South Korea, South Africa, Argentina, Indonesia, Turkey, Saudi Arabia and Australia.  The last member (20th) is the European Union, where the country holding the current EU presidency acts as its representative at the G-20.   Right now, it is the Czech Republic that holds the presidency.

Apart from this group of twenty, the World Bank and the IMF also attend G-20 meetings.

The first meeting was held in the year 1999 and the chairmanship rotates each year, with Britain heading the G-20 for 2009.

How the G-20 has evolved

G-20, as we have seen was formed in a crisis situation to discuss ways of averting a global meltdown.  Over the years, the range of issues discussed have increased, with the inclusion of domestic reforms, commodity markets, global energy resources, clean energy and a host of others.

In 2008, at the Washington summit, there was yet another change introduced, where along with the central bank governors and finance ministers, a leader level meeting was also conducted to discuss the financial crisis of 2008.  The Washington summit was followed by the London summit on April 2, 2009.

Details of the London Summit

With the current global economy in the dumps, the British Prime Minister Gordon Brown and French President, Nicolas Sarkozy took the initiative and asked for the meeting, to discuss this pressing issue.  They had also invited Thailand, which is the chairman of Asean (the Association of South East Asian Nations) and Ethiopia, which is the chairman of Nepad (the New Partnership for Africa’s Development).

Although, there were huge expectations from the London summit; locally, it is being seen more as an attempt by Prime Minister Gordon Brown, to boost his popularity at home. Critics are also not convinced of Brown’s stand that it is an initiative for the leaders of world’s major economies and important institutions to discuss and take the necessary action to stabilize the world economy and secure jobs.

Commitments to strengthen the financial system and resources of around 1.1 trillion dollars to support jobs and growth across the world, were made at the London Summit.

With the world economy and financial markets facing serious global challenges and the severity of ongoing uncertainties, there is need for urgent action.  The G-20 is now driving forward to work between advanced and emerging economies to handle this crisis situation sensibly, restore financial stability worldwide and lead the international economic recovery. To be able to secure the future of all countries, it is important to identify and understand the root causes of the current international financial crisis to ensure this does not repeat again in the future.

Another agenda on the G-20 to-do list is the long-term issue of climate change.  The main challenge for the G-20 was financing the global carbon emission reductions and helping developing nations that are worst affected by the climate change.  Poor nations asked for funds to help them develop sustainability to the expected increase in warming.  The question remains as to what the world leaders will think of this.   Countries like the US and Japan are doing their best to combat this.  In the US, tighter energy efficiency standards are being passed and in Japan, deep emission cuts are being pledged.   But there is not much time left. Environmentalists hoping for some sort of a concrete action on climate change remain disappointed, and G-20 has a big task on its hands.

G-20 is the coming together of the nations to collectively look into the needs of the world today and find solutions to key issues.