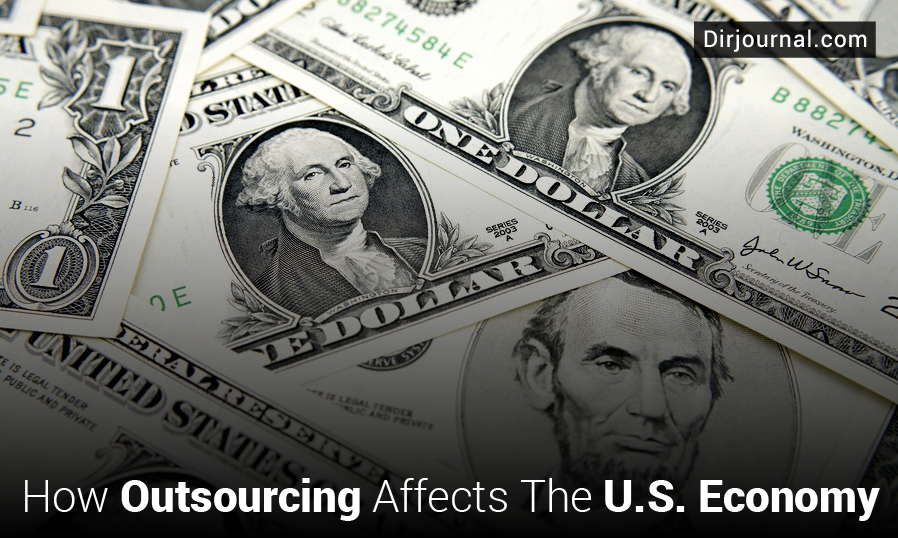 Update: This article was originally published on September 16, 2008 and was updated with new material to reflect issues relevant in 2013. Below you can find the updated content, followed by our original article on how outsourcing affects the U.S. economy.

Outsourcing has been a hot topic in business for many years.  There are people for and against it, each with reasoning that makes sense.  Some businesses like it because it can save them money on business expenses either from cheaper labor or savings on shipping material.  In some industries this is true and valid, such as in manufacturing.  Professional positions are also sometimes outsourced, such as computer programming.

The benefits in the case of professional and skilled labor can be questioned as there are still overhead costs related to communicating effectively and testing the final product to ensure it meets the criteria set.  This means the benefits have to be carefully weighed against the costs to make sure the outsourcing is worthwhile. And sometimes, some of those costs aren’t as obvious as they are in manufacturing industries.

That said, there are benefits to outsourcing skilled jobs when appropriate.  One such benefit is time utilization.  Most skilled jobs involve work during the day and don’t have the overnight shifts that many unskilled positions have.  However, if work can be outsourced to a country with an alternate daytime, the hours can be put to better use, having 24-hour productivity on some project or another.  For example, a local team might work during your company’s local typical working hours while an offshore team covers your “off” hours. Keep in mind though that there must be some schedule overlap for effective communication and follow-up to keep projects moving along.

Macro-economical Effects of Outsourcing on the U.S. Economy

The downside of outsourcing either skilled or unskilled positions overseas is that it does take away jobs from the country your company is located in. That in turn removes money from your country’s economy.  It might work great for your company specifically, but looking at the larger picture, it can also hurt the country as a whole economic system.

Perhaps in the future as we move more and more towards an integrated global economy this could change, but since there is a separation of country-specific economic situations for the moment, it can be detrimental to the development of nations. But this isn’t the only downside business owners should consider. After all, they need to prioritize their own company’s interests if they want to stay in business in the long run.

Effects of Outsourcing During an Economic Downturn

In times of economic downturn, like those many countries have experienced in recent years, it’s best to create jobs close to home to stimulate the economy by giving the people who live there more money to spend. This doesn’t just help the government and people in your local area. It helps your business too.

You see, when you hire locally rather than outsourcing, other people are getting paid.  These people are, in turn, your potential customers. When they have money, they can spend money. And if they can’t find work, they can’t do business with you either. It’s a big cycle that feeds into itself.  The higher income people need to rely on the middle and lower classes making enough to buy products and services from them to make more money.

So while outsourcing can make sense to a company’s bottom line when you only look at up front expenses, overall it could also hurt them if they rely on consumer spending domestically.

Overall there are both positive and negative effects of outsourcing and the decision to do so must be carefully considered on both a micro and macro economical level.

Below is our original article on how outsourcing affects the U.S. economy, published in 2008.

There has been and continues to be a lot of debate over outsourcing and while supporters say that it is good for the US economy, detractors argue otherwise.

Proponents insist that outsourcing will save money for companies, will open up opportunities and will lead to more Americans holding jobs at a higher level. They feel this practice offers substantial gains to the US economy with cheaper imports and stronger exports.

Opponents who are against outsourcing argue that hiring people from foreign countries effects the US economy in a negative way and strips hundreds to thousands of Americans of jobs, especially the skilled and semi-skilled workers. They argue that the loss of competitive advantage to other countries is permanent and the American worker and economy lose forever.

All the points seem valid in their place. It has to be agreed that outsourcing does lead to loss of jobs in the US, especially those that have minimal qualifications. On the other hand, the loss of jobs is not only limited to people with minimal skills, but also jobs of skilled labor that are being outsourced to other countries.

Americans who are in poverty and willing to do minimally skilled jobs find it harder to find jobs, and poverty does nothing for the US economy, other than reduce consumer spending and tax revenues.

There is also data that provides evidence that jobs are lost and lost forever, especially for those who belong to the low end of the food chain. A suitable example would be the manufacturing job losses examined by the University of California-Santa Cruz. In their study, they found that in a period of 20 years, in the labor intensive industries such as leather, textiles, footwear and clothing, about one-third displaced workers could not find reemployment within a three-year period, and even those people who did, about half of them experienced a substantial cutting in their wages by at least 15 percent.

The middle class American is not far behind as even his job is being outsourced. This level of outsourcing involves the computer and technology industry.

How does this affect the economy? 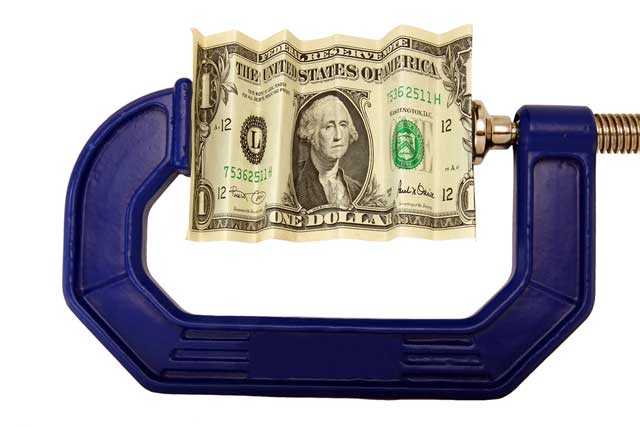 Outsourcing in these areas does not leave enough jobs for the Americans. A jobless person cannot purchase homes and cannot spend money. When people do not buy, people that produce things do not make money too.

Another harmful effect of outsourcing is loss of income by local, state and federal governments. There are lesser payroll tax receipts and lesser contributions to Social Security and Medicare. Then there are the outgoing payments for unemployment benefits. Sales and other tax revenue suffers too.

Outsourcing is nothing new. In the early 19th century, Britain imported cotton from the United States, then spun the cotton and weaved the fabric in England and then exported the finished textiles abroad, mostly to India, then its colony. UK kept about 80 percent of the monetary gains from these exports, adding to its national wealth. After some time, the mill owners came up with what a “so-called” smart idea – that they could grow the cotton in India and shift the textile machines there too, which will enable them to save money on wages and shipping expenses. This felt like a great idea, but then the monetary gains being repatriated to England was only 15 to 20 percent of the total value of the textiles in the form of profit.

Now 80 percent of the created monetary gains remained in India, which was a great loss to the British economy that resulted in unemployment as well as social unrest.

United States also faces similar problems. By outsourcing, not only skilled labor is lost but monetary gains too. What must be understood is that service jobs do not pay as much as manufacturing jobs do nor do they create national wealth. On the other hand, they absorb wealth. Manufacturing jobs have by far the greatest impact on national economy, in terms of losing skills and the time taken to retrain such a force. Another thing is the loss of industrial infrastructure with the closing down of U.S. factories and then exporting of capital abroad. This money is then not available for U.S. economic expansion.

Service jobs on the other hand do not need so much training and very little capital investment. U.S. companies derive savings in wages and more importantly in health benefit payments by outsourcing these jobs. Of course there is no doubt there is loss of national wealth by sending money abroad to pay their wages and salaries.

An argument pro outsourcing can say that short-term job losses brought on by outsourcing are mitigated in the long run by gains to American workers from consumption growth and free trade in low-wage countries.

Certain professional roles like retail, personal care, catering cannot be outsourced because of inherent personal interactions between the consumer and the deliverer. Because the service sector encompasses about 70 to 80 percent of the U.S. economy, outsourcing can impact only a sliver of U.S. employment.

According to research data, more than 400,000 U.S. jobs had moved abroad and the total is estimated to hit 3.3 million by 2015. That’s just above 200,000 jobs lost every year to global outsourcing, a trivial problem in the context of the normal churn of the U.S. economy, where about 7 million jobs were gained and lost in each of the previous four quarters.

Many government agencies outsource a part of their work in order to save millions of dollars, which helps US economy and helps federal spending. The theory here is that paying people less for work means that these companies have the ability to produce things cheaper and will be able to transfer these savings to their consumers back in the U.S. Cheaper rates means more consumers buying the products. One example is that of the early 90s, when the price of personal computers dipped because the U.S. chip manufacturers outsourced this offshore and thus reduced chip prices anywhere between 10 to 30 percent.

So who actually benefits from outsourcing?

U.S. investors, shareholders and American consumers derive the benefits of outsourcing, although sometimes at the expense of American wage earners.

Another supportive argument is that outsourcing jobs to other less developed countries helps those countries economically and helps increase trade for US products. It also gives those countries the ability to pay back their debts to the U.S.

Experts believe that the greatest saving potential comes from outsourcing simple assembly work or services. Since there is not much capital involved, except for training people in other countries and payments for displaced U.S. workers, there is no other major investment.

Outsourcing is a difficult issue to tackle and everyone, the supporters and detractors agree on one thing – that outsourcing cannot be eliminated completely. Some people feel companies that outsource should be taxed for outsourcing and those that do not should be rewarded. 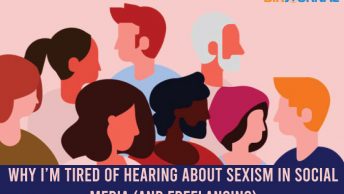 BusinessInternet and OnlineSales and Marketing