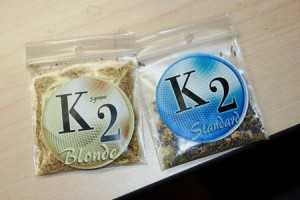 K2 is a mixture of herbs and certain cannabinoids that gets you high when you smoke it. Synthetic weed. It’s similar to marijuana except for:

So since it’s legal, it must be okay, right? Not so fast…

What can someone add to the ingredients of the drug? Answer: practically anything. Over the years, there have been situations when illegal drugs purchased on the street were found to have harmful, even deadly ingredients added to them. It is not too farfetched to conjecture that something similar will eventually happen to users of K2.

Dr. Corey Herbert, a medical editor for TV station WDSU in New Orleans, is concerned about that very situation. He states “Every time you use supplements like this one or anything else, it’s really like playing Russian Roulette because you have no idea what is in that package.”

The drug’s creator, chemist John Huffman of Clemson University, stated his drug mimics the narcotic effects of THC, the active ingredient in marijuana. He also cautions that his lab had developed the drug for research purposes only, and that “their effects in humans have not been studied and they could very well have toxic effects.”

As a relatively new synthetic, the jury is still out as to whether or not there are any long term effects coincident with its usage. In ancient Rome, lead was sometimes sprinkled in wine for the effect it had on the user: stupor, disorientation, etc. We now know that ingesting lead can be deadly. Some even postulate the fall of the Roman empire can be attributed to the use of lead in that society.

For current comparisons, K2 and steroids can be viewed side by side. This latter drug was initially touted as a wonder chemical that could enhance athletic performance. But more recent reports of the adverse effects of steroids now make even a casual user think twice if the short term gains really supersede their long term effects. Can we expect cancer? Will the offspring of users experience birth defects? What about neurological impairments?

It’s difficult if not downright impossible to find someone who has ingested the drug. This was evidenced recently by a drug testing company called Redwood Toxicology. A spokesperson said the possibility of being able to definitively conclude a person is under the use of K2 is very difficult.

The problem in nailing down a sure-fire test, urine-based or otherwise, is the moving target nature of the drug. Since the stuff was originally created in a lab and now other labs are producing it, any number of changes to its composition can be affected with very little ease.

Synthetic marijuana is still pretty new to us all. Little testing has been done, so it’s hard to say if it’s safe or not. What I do know is that a handful of states have already banned it. And we can expect more to follow. So if you’re considering trying out K2, your best bet is to leave it alone until more studies are completed.

What do you think about this new synthetic drug?