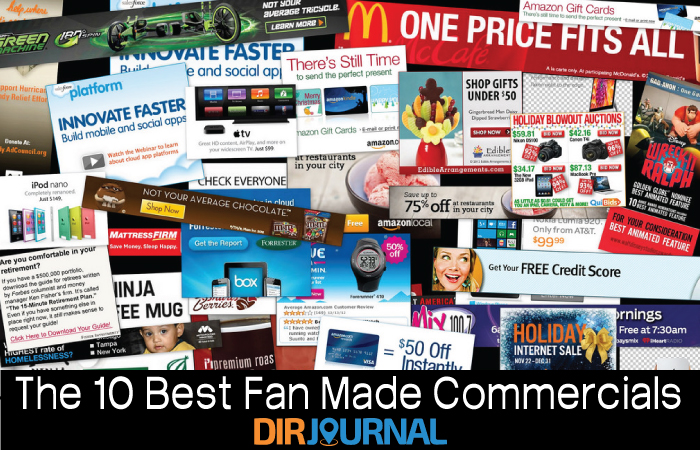 The 10 Best Fan Made Commercials

When you think of a commercial you probably think of what you see on TV that is meant to sell you a product. This marketing technique has been around for a long time, and it will continue to be for years to come. It  has also expanded to the web, where you can find running commercials on websites that can be muted and unmuted, ads in between officially places Youtube videos, or on TV sites like Hulu.

But there are some commercials that weren’t made by ad agencies. These were created by fans, media students and customers that have decided to put together their own ads. Some are cheesy, some are offensive, and still others are more or less rip offs of the originals. But occasionally one will come along that is not only innovative, but fun to watch.

These are my ten favorite ads currently on the web.

This is one of those ads that you just know Lego wished they had created. Clean, simple and very entertaining, anyone who grew up building with these little plastic blocks will end up with a goofy, nostalgic smile on their face. It gives you a warm feeling, and leaves you wishing your were a kid again. Or just acting like one while you pull out your kid’s playset for your own Lego city.

Man’s best friend getting back at a guy with a sadistic love of teasing canines with Doritos. What makes this such a great ad is that it looks like any Superbowl commercial they would have played on television, with the slightly edgy, comedic feel. Plus, the dog is cute as a button.

Just seeing the various generations of Mario games presented like this is enough to give a geeky girl like me chills. But add in the uplifting music and turn it into a fan commercial and you have yourself an instant win. If you grew up playing Mario games, you have to check this one out.

Ignoring the fact that the guy doing the voice over sounds like Heath Ledger as The Joker, this was a well made little piece of fan advertising that gets a clear message across: Apple are innovators. While they are most definitely one of the big corporations, they have changed things in the technological entertainment way in a very major way.

This is one fan ad that absolutely looks real. It was well done, interesting, and reminds me of a lot of the smart phone commercials I have seen on television. The music is also fantastic, though definitely standard for a marketing tune.

Almost indistinguishable from the official Samsung ads for their Galaxy tablet, the creators of this commercial even managed to get the slight cheesiness right. The difference is that they have managed to improve on the original TV spots by personalizing the message, giving it a touching ending and making you feel like it could be a really good product for the average person. Samsung, take note!

Hand drawn, simple and interesting: three great touches to this Wii commercial. It even shows a couple of classics to point out the far-back genius on Nintendo. When you have a company so ingrained in many of our childhoods continuing that same excellence today, it is always nice to have that little bit of nostalgia thrown in.

Not that interesting on a fan level, but what makes this ad special is that it looks real. I never would have expected this to have been made by someone other than a television marketing firm had I seen it without forewarning.

A little sloppier than some of the other ads, this one is none the less very nicely stylized. As it is centered around the World Cup 2010, the maker had some great material from separate ads released at the time and brought it all together for an intense and well made commercial that those of us who obsessively watched the World Cup games last year will be sure to appreciate.

I love this commercial. Rather than make you feel like you are being sold to, it just leaves you with a good feeling. It doesn’t overstate the product and instead eases it in at the beginning and end. The music is perfect, and watching the people watching the marathon runners dancing puts a smile on your face. Well put together, and again, Nike should take note!