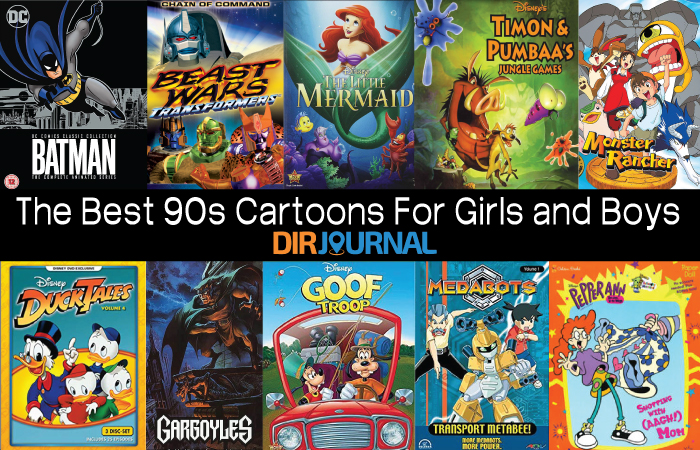 Ah, the 90s! What a wonderful time to be alive. Why? That’s when I grew up, of course! This automatically makes the 90s the best decade ever. (Especially for the Grim Reaper-I mean, wow, Kurt Cobain! I’m so jealous!)

The best thing about the 90s was that it had cartoons for everyone. Boys had a great selection of action-packed shows, and girls had some entertaining fare as well. With that said, I’d like to take a gander at the best 90s cartoons for girls and boys. Before we start, I’d just like to thank myself for coming up with this list. Hopefully it’ll go better than my last one-“The Top 10 Supermodels I Am Stalking Right Now”.

The Best 90s Cartoons for Girls

I’ll be honest. I have a sister, but she’s not really “girly”. She hated Barbie as a kid, and she never liked girly cartoons either. That’s pretty damn inconsiderate of her, I gotta say. How can I make a list of the best 90s cartoons for girls if she didn’t actually watch any?

Fortunately, I am a king of the 90s, so I can fill this list on my own. There ARE some girly-fruity-la-la shows on here, but I also included some middle ground shows that girls are more likely to watch. Don’t worry about this list being girly enough-I’ve personally tested each show for the ideal levels of girliness. Just don’t ask me to give you my man card. In my case, it’ll be like 52 Man-Card Pickup.


I only watched this show to fill time, and I never liked it. Maybe because it’s on a list about 90s cartoons for girls. Sure, Pepper Ann herself is eccentric, but the show still covered teenage female issues that I don’t need to know about. I mean, who can forget the bra episode? I sure can’t. Especially the part where she lifted her shirt in front of her class, burning the image in my soul forever. Magical. What’s more magical is that an artist probably saw that episode and figured, “You know, there’s not nearly enough porn for this as there should be.”

Look. Mermaids are hot, and because of it, Ariel makes this show a lot more tolerable than it really is. Beyond that it’s standard fare. Ariel and her friends bop around and get into silly adventures. Whoopee. Still, the coloring they use in this show really bugged me. After the vibrant colors of the film, the cartoon just looks cheap and muted. What’s the deal, Disney? Don’t you have the BUDGET to make your cartoons look as good as your movies? Maybe if you held a telethon and said that Mickey had muscular dystrophy, you wouldn’t have this problem.

Goof Troop is one of those “middle ground” shows about Goofy and his son, Max. Simple stuff. So why is it on here, if I’m definitely not already running out of ideas? Well, it’s because of the animated films that followed this cartoon. They focus on Max as he goes to high school and college, and because of that, the whole thing becomes a teen franchise that manly men like myself can’t stand. That’s why Goof Troop is now primarily a cartoon for girls. In order to reorient for a female audience, all the male characters must now use our new “Home Sex Change Kit”. It includes a bandsaw and enough Tylenol for South Africa.

Now we’re getting into the cartoons I like. Timon and Pumbaa focus on…well, the meerkat and the warthog from The Lion King. (Spoilers end here.) They get into a bunch of wacky adventures, but the big difference is that the episodes don’t always take place in the wilderness featured in the film. They go to places like Spain, New York…even medieval times, for some reason. Personally, I can’t wait for when they have an adventure into the process behind making a McRib Sandwich. Pumbaa will find it most enlightening! (So will Timon, once they actually discover what McRib meat is made out of.)

Ahem. Sorry. Anyway, DuckTales is about Scrooge McDuck and his nephews going on adventures across the globe. That’s pretty cool, actually. It’s got a neat Indiana Jones feel to it, and the best part is that no faces were melted during the production. The show is great for girls, too, because it’s loaded with charming Disney characters. Of course, if you’ve seen DuckTales, you probably remember its iconic theme song. You know, the one that you’re humming right now? I figured you would do that. I bought the strategy guide to your life before you were even born. Here’s a hint for the next level-someone you meet in the future will not actually be a woman.

The Best 90s Cartoons For Boys

Oh, yeah, now we’re in familiar territory. This list was hard to make-with all these options, it’s hard to choose. However, I sorted through them all and picked the five manliest 90s cartoons for boys. Watching these is sure to increase your tetosterone a hundredfold. And then you might die. It’s an unfortunate side effect-some of you daisies can’t handle such manliness.

…I’ll be right back, I suddenly can’t see through my left eye for some reason.

Pokemon started the trend of collectible creature fighting, but this version is probably the best. Why? Well, here’s a short FAQ.

That’s why Medabots kicked ass. Kids were encouraged to go to the store, buy A ROBOT, give it GUNS AND MISSILES, and then kill each other. WARNING: THAT IS TOTALLY AWESOME. Sure, the art style looked funky and the colors were washed out, but who the hell cares? You’re fighting each other with robots! It’s like playing with Nerf guns, except these toys can cause post-traumatic stress disorder.

Okay, Monster Rancher also has you collecting monsters and fighting with them like Pokemon. So why is it on the list? It actually has a PLOT. In Monster Rancher, a kid named Genki is sucked into an alternate world full of monsters, so he builds up a powerful team to take down the dark lord Moo. Yeah, it’s spelled Moo. But who cares? Pokemon’s storyline never got more interesting than “how is Team Rocket gonna biff it this week?” Monster Rancher was way more exciting. And guess what-n the games, you actually spawn monsters from music CDs you own! Too bad it doesn’t work with my new single – “Sorry I Had To Live In Your Sock Drawer”.

Beast Wars was created to sell a new line of Transformers toys, but it went beyond that and created a world with a tight storyline and involving characters. Even as new product was introduced, the world and characters changed over time. They even KILLED some of my favorite characters, but their deaths were written so well that it just drew me in more. Even if they came back to life later, it never felt like a cheap tactic. The show was so good that it revolutionized Transformers for years to come. So how was the favor repaid? The sequel, Beast Machines, which is kinda like back when you thought upgrading to Windows Vista was a savvy move.

Would you believe that a mature show like Gargoyles was produced by Disney? Yeah! It’s a Disney show, and it’s AWESOME. Gargyoles features mythic beasts fighting a battle against magical and modern adversaries. The characters are what made this show-not only are the heroic gargoyles complex, but the villians are interesting too. Naturally, a show this good had to be cancelled as soon as possible. That didn’t stop the fans, though-there’s been written episodes, a comic book series, and even a convention. I gotta appreciate how dedicated fans are willing to keep the memory of a show alive. Just think of all the cartoon porn they had to sell to make it work. (Hint: at least 750 MB.)

This is, without a doubt, one of the best cartoons ever made. I mean it. It had a dark atmosphere and dealt with mature themes and interesting characters. The tone scared me when I watched it as a kid, but that’s why it’s so good-it never talked down to you. Adults liked it as much as kids, proving that animated shows can tell a story as well as live-action dramas. Plus, it added so much to the Batman mythos. New characters, new ideas…and best of all, it started a new voice-acting career for Mark Hamill based on his incredible work as The Joker. What else could you ask for? I don’t know, but what the hell is wrong with you? Why would you even want that, you sick bastard?

So those are the best 90s cartoons for girls and boys. I hope this journey into the past has taught you a lot about yourself. Me? Well, I learned that I could have been making more friends instead of watching cartoons all the time, so thanks for opening up those old wounds, jackass.

What are your favorite cartoons of the 90s? Let us know in the comments below. Feel free to tell me why I am a whore for failing to include Animaniacs. (Look, it needs some time off from appearing on all of those top cartoon lists, all right? Maybe it’d be more willing to do my next list – “Top 10 Items That Are On A Top 10 List”.)

DISCLAIMER: All properties listed belong to their respective right holders. I’m just using stuff under fair use rights. It’s not my fault, I blame Zoidberg.