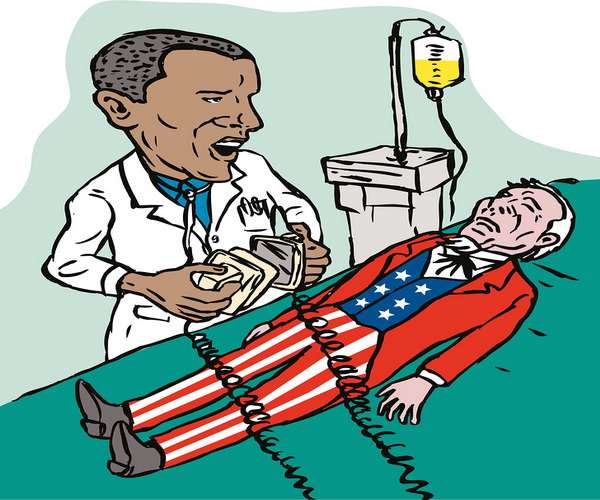 Let there be no doubt, President Obama has lost the health care debate. Even if Obama and the Congressional Democrats are able to muster up the political strength to pass health care legislation, the costs will have been too high, and even in victory, the President will have lost. His presidency may very well never regain the sense of optimism and positivity that trailed his first months in office.

The central mistake of the health care debate, and the one the administration will look back on with regret, was the administration’s decision to outsource the actual writing of the bill to Congress. Without any clear direction beyond the President’s insistence that any bill include a “public option,” the debate shifted from the quiet dignified end of Washington to the madhouse known as the Capitol. Once there, the various factions and coalitions each worked to produce their very own fairytales. What emerged was a cacophony of decades-old wishlists, radical reforms and special-interest agendas that even supporters of health care reform couldn’t view seriously.

Lost in the noise on the capitol were a series of true reforms, such as tort reform, that were suppressed rather than ignored. Anyone who wants to reform health care without even talking about tort reform is not being serious. Congressmen like Henry Waxman don’t want to reform health care, they want to remake our system entirely, and they want the government firmly in control. In this way, they simply turn people into products.

He ignored requests to wait to see if the Senate could produce, instead forcing a painful floor vote on legislation prior to the July Fourth recess. Members went home to be brutalized by constituents and local employers.

This high-handed treatment already had Blue Dogs loaded for bear, not that Mr. Waxman heeded warnings. When he again ducked into secret meetings to craft health-care legislation, a group of 45 members sent a letter complaining. “We don’t want a briefing on the bill after it’s written. We want to help write it,” declared Arkansas’s Mike Ross, chair of the Blue Dog health-care task force. Rebuffed, conservative Democrats delineated for Mr. Waxman what they saw as an acceptable bill. Rebuffed again, they asked Mr. Waxman to let the Senate go first. Rebuffed yet again, Mr. Ross took his case to the nation, with a revolt that has beat down the House bill for weeks.

Mr. Waxman’s subsequent negotiations with these members—in which he reportedly showed little concern for the political challenges of anyone outside of Los Angeles—made matters worse. Blue Dogs stormed out of one session, with Louisiana’s Charlie Melancon bellowing: “I’ve been lied to. We have not had legitimate negotiations.” Mr. Waxman, for his part, declared he was “not going to let [Blue Dogs] empower Republicans to control the committee.”

When this is the kind of behavior we get from our elected leaders we should not be surprised when congressional approval levels are so low. The most recent Gallup poll showed an approval rating of just over 30%, and more importantly a disapproval rating of 62%. After the automobile and finance industry bailouts, a highly partisan stimulus package that only 3 Republicans deigned to vote for, a massive budget, the health care reform package was simply the straw that broke the camel’s back. It was too much too soon, and the American people reacted. The town hall meetings, though fraught with their own imperfections, remain the only outlet the vast majority of American citizens have left to vent their frustrations.

The summer has seen countless images of congressmen being shouted down by their constituents. What is even more telling than the shouting is the shock and awe of the elected leaders. They simply do not understand why the people aren’t on board.

This is what they don’t get.

The American people are not on board because deep down they know that health care reform was never an attempt at reform, but instead a massive and risky overhaul, a land-grab by the federal government into one area of their lives that is supremely sacred, that of personal health.

No sane person defends our current health care system as a model of efficiency or fairness. It’s not and it needs to be fixed. But adding another giant entitlement program onto the obligations of our already beaten federal treasury is not a solution. Not at time when Social Security and Medicare are already threatening the country with insolvency.

The Democrats and, in particular, President Obama, failed to link their health care reform plans to the larger issues facing America. They simply seized a rare opportunity at almost-unchecked power to install a fairytale dream of theirs. American’s may never be so easily fooled again, at least not on Mr. Obama’s watch.