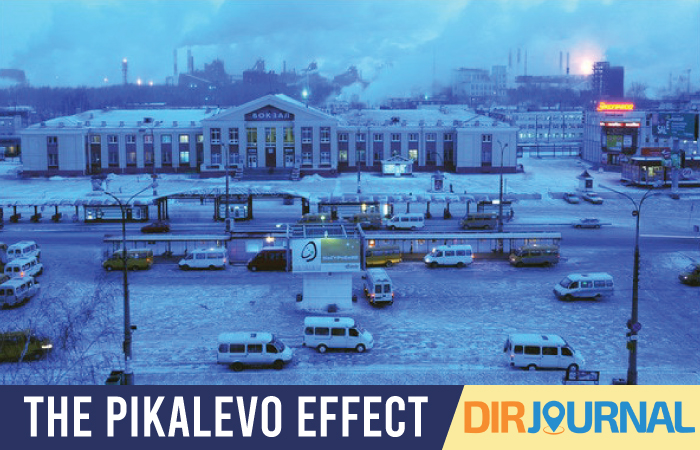 Two years ago, Pikalevo, a small Russian town near St. Peters Berg, set off something that Russia had not witnessed previously. The people of Pikalevo took to the streets in protest against the closing of the industries that supported this small town. This ‘unrest’ signaled the beginning of an unusual phenomenon for modern Russia; people protesting against the government and its economic policies.

Russian president Vladimir Putin had to personally intervene to calm down the situation by personally visiting this small town of 21,000 people and by having the involved company’s CEO pay £830,000 in outstanding wages to the workers within 24 hours. The Pikalevo revolt instilled a fear of mass protests in the heart of the government which proved to be true when other Russian towns also engaged in protests later that year. Many more towns like Pikalevo are at risk because of their dependency on one single industry, which if shut down can wipe out the whole town.

“The town only exists because of this plant. So if it goes down, then the town will be lost and there will be looting and fighting in the streets,” said a worker who was laid-off from the aluminum factory in Pikalevo.

Now, two years later, the Russian capital is witnessing the Pikalevo effect. Workers of the Trekhgornaya Manufaktura are protesting against the loss of dozens of jobs and once again they are looking to Putin to come to the rescue. These are not isolated incidents involving disgruntled jobless people; instead these incidents are fragments of a larger picture. The common link between these two incidents and several others like these in other small towns is one person. This man has interests in various industries which have made him one of the world’s wealthiest men, but unfortunately this good fortune does not trickle down to the people who have poured their blood and sweat to create this wealth.

The economic meltdown underway in town after town in Russia is a result of the effects of this man’s reckless disregard for his workers’ well-being and poor financial management of his business empire. The mysterious death of Yuri Smolentsev, Trade Union Chair at the Alumina Plant – part of The United Company Rusal, added more fuel to the public sentiments against the man behind Rusal and Basic Element.

Basic Element is an investment company in Russia that has assets in energy, manufacturing, financial services, construction and aviation. It owns major companies like United Company RUSAL, the world’s largest aluminum and alumina producer; GAZ Group automotive company, Ingosstrakh, Russia’s oldest insurance company; Bank SOYUZ, Aviakor aircraft manufacturer; EuroSibEnergo, Russian-Asian Investment Company; and Glavmosstroy, a planning and construction company. Basic Element employs about 250,000 people. Many of these 250,000 people are fearful about their future because of the misguided actions of their employer.

The crises like Pikalevo and Trekhgornaya Manufaktura have not threatened the government the way it was initially feared. However, the unprecedented reactions of the people definitely call for reigning in oligarchies like Basic Element that have the power to play with the fate of hundreds of thousands of people.

Note: This is a Guest post by Dimitry. A journalist working for the betterment for Russia