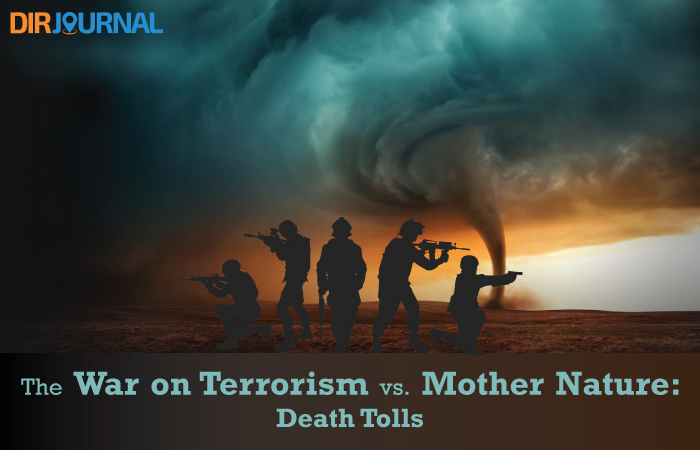 The War on Terrorism vs. Mother Nature: Death Tolls

Who needs natural disasters when we as human beings are so capable and talented at making our own — the BP oil spill in the Gulf of Mexico for example? Yet Mother Nature rarely cuts us any slack. She buries us in mudslides, submerges us in floods, and pummels us with hurricanes, tsunamis, and earthquakes.

Mother Nature has taken quite a toll on us over the years, leading to countless deaths. And yet we seem to know so little about her, or how to predict these disasters accurately enough to save all of the lives lost. At the same time, we have no problem throwing more money and resources into things like war. So today I want to look at those two things, death tolls, and why maybe Mother Nature deserves a little more of our attention.

Before I get into the topic area, I want to make a few things clear up front:

Now that we’re clear on that, let’s get to some numbers.

Let me start with a relatively small example or two from the U.S. I call it “small” in the sense of death tolls in the grand scheme of things, but the events of September 11, 2001 are hardly “small” in what they ultimately led to. However, during that terrorist attack, it’s reported that approximately 2981 people died in the 9/11 attacks according to the 9/11 Commission Report.

Just a few years later, in 2005, there was to be more loss of life here in my home country — this time by the hand of Mother Nature. That’s when Hurricane Katrina hit, killing 1836 people. [source]

While not as many people were killed by the natural disaster in this case, 1836 lives were lost. That’s a lot. And yet we don’t really hear Americans talking about it as much anymore, unlike the resulting War on Terrorism after 9/11. How is it that we can be outraged enough to launch military operations, but we don’t seem to have an equal outrage pushing us into new advancements in science that could save lives by offering better predictions of when the next disaster might strike New Orleans?

All in all, those are small numbers. But they illustrate my frustration with people’s reactions pretty well. Now let’s take a look at some of the bigger incidents, starting with the conflicts in Iraq and Afghanistan that occurred after the 9/11 attacks.

Let me be clear though — statistics about death tolls in these incidents can be hotly debated. I’ll link to any sources used, but I do not confirm all stats are accurate. Many are just estimates, and sometimes those estimates fall within rather large ranges. They’re being used for illustration purposes only.

First let’s take a look at Coalition military fatalities in both Afghanistan and Iraq. According to iCasualties.org, Coalition forces suffered 1817 killed in Afghanistan so far and 4721 killed in Iraq.

But Coalition forces certainly weren’t the only ones killed in these conflicts. From the beginning of the war in Iraq through May 20, 2010 it’s been estimated that somewhere between 96,663 and 105,408 Iraqi civilians have lost their lives. [source] Even if we were to account for a fairly large margin of error, that still means military deaths paled in comparison. And in the Afghan operation we’ve seen 6584 Afghan civilians killed from 2006 through October 2009. [source]

I have no doubt that some of these estimates are “off,” but they give us rough numbers for comparison purposes. So let’s total them up — years of conflict leading to an estimated 146,156 dead. I’ve seen much higher estimates into 7 figures too, accounting for other violent deaths, but these are the numbers I could find that could be broken down effectively into war-specific groups — they don’t necessarily include any other terrorist attacks that took place.

146+ thousand people dead — that’s a lot any way you cut it. And I think it’s right that issues with that kind of result are such hot button topics for people on both sides. But Mother Nature’s killed far more people in recent years. Let’s just look at two of the biggest natural disasters:

Both the Indonesian tsunami of 2004 and the Haiti earthquake of 2010 occurred while these military conflicts were going on. It’s reported that 230,210 people died in the tsunami and 222,000 people died in the Haiti earthquake. [source] That means just those two natural disasters killed 452,210 people. That doesn’t account for the many other disasters that killed a few hundred to a few thousand people, or more “routine” deaths related to natural instances such as automobile-related deaths during storms.

Is the death toll from the War on Terrorism important? Should it be on our minds? Absolutely. But so should natural disasters — and not just when organizations are looking for hand-outs to help the victims. Let’s turn more of our attention to them now so we can work harder to prepare for them and save lives instead of just trying to clean up the mess afterward. Yes, there is research being done. But do you think it’s enough?

You might also enjoy reading Worst Manmade Ecological Disasters and Failed Prophecies: Major Doomsday Predictions That Did Not Come True!