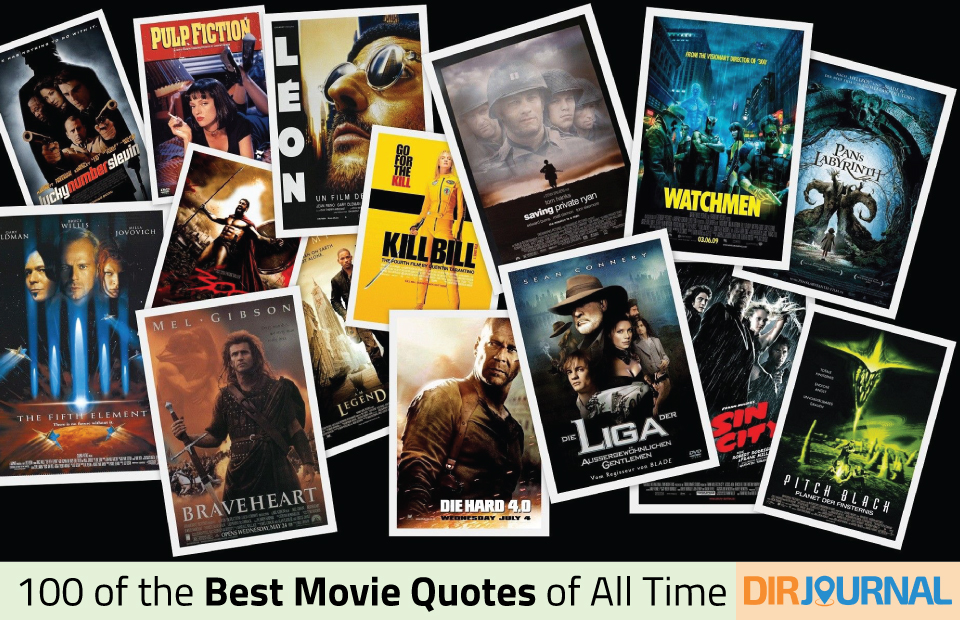 100 of the Best Movie Quotes of All Time

Have you ever watched a movie and heard a line you absolutely loved? Do you find yourself quoting your favorite characters or feeling inspired by a movie quote from one of your favorite films? There are some great movie quotes out there — some contemplating important life issues and others just for fun. Let’s look at some of the best movie quotes around.

Obviously we’ll all have our favorite movies and quotes from them. But here are 100 of the best movie quotes in my opinion. Hopefully you’ll find one that you enjoy. Please leave a comment to share your own examples of great movie quotes with us and other readers.

2. “Listen to me, mister. You’re my knight in shining armor. Don’t forget it.”

4. “There’s a lot I don’t understand about life. You meet thousands of people, and then you meet one person, and your life is changed forever.”

6. “It was like coming home, only to no home I’d ever known.  I was just taking her hand to help her out of a car, and I knew. It was like… magic.”

8. “Love is eternal. It has been the strongest motivation for human actions throughout history. Love is stronger than life.”

10. “Sometimes, the only way to catch an uncatchable woman is to offer her a wedding ring.”

12. “I would rather have had one breath of her hair, one kiss from her mouth, one touch of her hand, than eternity without it.”

13. “Death cannot stop true love; it can only delay it a little while.”

14. “Life moves pretty fast. If you don’t stop and look around once in a while, you could miss it.”

16. “My momma always said life was like a box of chocolates. You never know what you’re gonna get.”

17. “The worth of a life is not determined by a single failure or a solitary success.”

21. “Life is not the amount of breaths you take. It’s the moments that take your breath away.”

22. “I figure life’s a gift and I don’t intend on wasting it. You don’t know what hand you’re gonna get dealt next. You learn to take life as it comes at you, to make each day count.”

24. “Why are you trying so hard to fit in when you are born to stand out?”

25. “Death – to blink for an exceptionally long period of time.”

26. “You can be mad as a mad dog at the way things went, you can swear and curse the fates. But when it comes to the end, you have to let go.”

28. “On a long enough timeline, the survival rate for everyone drops to zero.”

29. “When someone you love dies, you don’t lose them all at once. You lose them in pieces over time, like how the mail stops coming.”

30. “Don’t you be afraid, sweetheart. Death is just a part of life, something we’re all destined to do.”

31. “If the rich could hire others to die for them we, the poor, would all make a nice living.”

35. “It is well to dream of glorious war in a snug armchair at home, but it is a very different thing to see it first-hand.”

39. “War is too important to be left to politicians. They have neither the time, the training, nor the inclination for strategic thought.”

40. “And what are you? So full of hate you want to go out and fight everybody! Because you’ve been whipped and chased by hounds. Well that might not be living, but it sure as hell ain’t dying. And dying’s been what these white boys have been doing for going on three years now! Dying by the thousands! Dying for you, fool! I know, ’cause I dug the graves. And all this time I keep askin’ myself, when, O Lord, when it’s gonna be our time?”

41. “We who have seen war, will never stop seeing it. In the silence of the night, we will always hear the screams.”

43. “Every man who wages war believes God is on his side. I’ll warrant God should often wonder who is on his.”

44. “The blight of war does not end when hostilities cease.”

45. “In my humble opinion, in the nuclear world, the true enemy is war itself.”

46. “You still think it’s beautiful to die for your country. The first bombardment taught us better. When it comes to dying for country, it’s better not to die at all.”

48. “A man who doesn’t spend time with his family cannot be a real man.”

49. “The only thing permanent in life is family.”

50. “You’ll see when you move out. It just sort of happens one day and it’s just gone. And you can never get it back. It’s like you get homesick for a place that doesn’t exist. Maybe that’s all family really is, a group of people who miss the same imaginary place.”

51. “The best thing parents can do for their kids is just love each other.”

52. “In families there are no crimes beyond forgiveness.”

53. “It’s a funny thing coming home. Nothing changes. Everything looks the same, feels the same, even smells the same. You realize what’s changed is you.”

54. “I never realize how much I like being home unless I’ve been somewhere really different for awhile.”

55. “Why do we always expect home to stay the same. Nothing else does.”

58. “Remember George, no man is a failure who has friends.”

59. “I never had any friends later on like the ones I had when I was twelve.”

61. “It’s an insane world but in it there is one sanity, the loyalty of old friends.”

62. “Good friends are one of life’s blessings. Don’t give them up without a fight.”

63. “You’ve not been very lucky with your relatives, have you? All the more reason to be choosy with your friends.”

64. “Friendship is much more lasting than love.”

65. “Only a true friend would be that truly honest.”

67. “I have a dream too, but it’s about singing and dancing and making people happy. It’s the kind of dream that gets better the more people you share it with. And I found a whole group of friends who have the same dream, and that makes us sort of like a family.”

68. “Louis, I think this is the beginning of a beautiful friendship.”

69. “It’s supposed to be hard. If it wasn’t hard everyone would do it. The hard is what makes it great.”

70. “I believe God made me for a purpose, but he also made me fast. And when I run, I feel His pleasure.”

71. “Fear is not what’s important, it’s how you deal with it. It would be like asking a marathon runner if they feel pain. It’s not a matter of whether you feel it, it’s how you manage it.”

72. “A gold medal is a wonderful thing. But if you’re not enough without one, you’ll never be enough with one.”

73. “Being perfect is not about that scoreboard out there. It’s not about winning. It’s about you and your relationship with yourself, your family and your friends. Being perfect is about being able to look your friends in the eye and know that you didnt let them down because you told them the truth. And that truth is you did everything you could. There wasnt one more thing you could’ve done. Can you live in that moment as best you can, with clear eyes, and love in your heart, with joy in your heart? If you can do that gentleman, you’re perfect.”

74. “I don’t care what the scoreboard says at the end of the game, in my book we’re gonna be winners.”

75. “I love baseball. You know it doesn’t have to mean anything, it’s just beautiful to watch.”

76. “Football is about controlling that anger, harnessing that aggression into a team effort to achieve perfection!”

77. “And I say to you gentlemen that this college is a failure. The trouble is we’re neglecting football for education.”

78. “Oh, it’s a fine game, football – noble game. Originated in England in 1823…It moved to America where someone took advantage of a loophole in the rules, and invented a little formation called the Flying Wedge. So many young men were maimed and killed by this clever maneuver that President Roosevelt – Theodore Roosevelt – had to call the colleges together and ask them to make the game less brutal. He was, of course, defeated in the next election.”

79. “There’s a force in the universe that makes things happen. And all you have to do is get in touch with it, stop thinking, let things happen, and be the ball, be the ball.”

81. “Though we adore men individually, we agree that as a group they’re rather stupid.”

82. “Truly, for some men, nothing is written unless they write it.”

83. “A guy can change anything – his face, his home, his family, his girlfriend, his religion, his God. But there’s one thing he can’t change, he can’t change his passion.”

The Secret in Their Eyes (2009) – Pablo Sandoval (Guillermo Francella)

84. “Everything I ever learnt as a small boy came from my father, and I never found anything he ever told me to be wrong or worthless. The simple lessons he taught me are as sharp and clear in my mind as if I had heard them only yesterday.”

86. “The man is the head but the woman is the neck. She can turn the head any way she wants.”

87. “All women are wonders because they reduce all men to the obvious.”

88. “Beautiful women are invisible…we never actually see the person. We see the beautiful shell. We are blocked by the beauty barrier….We are so dazzled by the outside that we never make it inside.”

90. “I fart in your general direction. Your mother was a hamster and your father smelt of elderberries. Now go away, or I shall taunt you a second time.”

91. “There’s only two things I hate in this world. People who are intolerant of other people’s cultures and the Dutch.”

92. “You look so good with blond hair and black roots, it’s like not even funny.”

93. “All I’ve ever wanted was an honest week’s pay for an honest day’s work.”

96. “I think most Scottish cuisine is based on a dare.”

So I Married an Axe Murderer (1993) – Charlie Mackenzie (Mike Myers)

97. “I was married. My husband cheated on me left and right. One day he tells me it’s my fault he saw other women. So I picked up a knife, and told him it was his fault I was stabbing him.”

98. “There’s no reason to become alarmed, and we hope you’ll enjoy the rest of your flight. By the way, is there anyone on board who knows how to fly a plane?”

99. “Which reminds me of the time an Englishman, Irishman, Scotsman, a Vicar, a Rabbi and a Priest all go into a bar and the barman looks up and says ‘Is this a joke?’”

Do you have a favorite movie quote?
Leave a comment and tell us what it is, what movie it’s from,
and why it appeals to you.