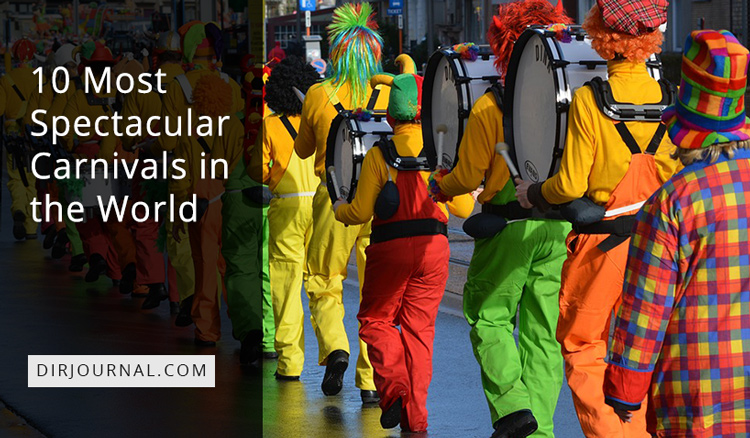 Believe it or not, but February is the most festive time of the year. Why? Because of the carnivals happening world-wide! The festivities typically include lively parades, rich foods, and different forms of entertainment.

Many different theories surround the origins of Carnival. Some suggest that it is derived from the Latin expression “carne vale”, which means “farewell to meat”, signifying that those were the last days when one could eat meat before the fasting of Lent. Others believe that the celebrations were a way to scare away evil spirits, thereby saying goodbye to winter and welcoming spring.

There are hundreds of carnivals across the world, but there are a select few that have proved to be the most spectacular ones.

This is definitely number one carnival in the world – the greatest and most colorful. Modern Brazilian Carnival originated in Rio de Janeiro in 1641, and has become an event of huge proportions. Every year, the carnival is held between 13th and 16th of February. It begins with the crowning of the Fat King (King Momo), who is presented with a giant silver and gold key by the city’s mayor. Then it is carnival all over the place, in the streets and squares, bars, clubs and all other venues, culminating is the Samba Parade, when the best samba schools in Rio march through the half-mile long Sambodromo theater in Rio – some of them paying as much as $1,000,000 to prepare for the big day and compete to be known as the best in Brazil. Up to 50,000 spectators come to watch, and the event is broadcast around the globe.

2. The Carnival of Venice, Italy

The Venice Carnival is probably the second best known carnival in the world. It starts around two weeks before Ash Wednesday and ends on Fat Tuesday, or Mardi Gras. It consists of grand balls, concerts, dances, parades and other events. The participants tend to wear elaborate costumes and masks. This congregation of masked people began in the 15th century, but the tradition can be traced back to the beginning of the 14th Century. The Venetian Mask came into being because all the residents wanted to be treated equally, no matter how rich or poor they were. Today, approximately 30,000 visitors come to Venice each day for Carnivals. In the squares street-artists and singers entertain with songs and music from their guitars, the guests of the Venice Carnival.

The Nice Carnival is one of the major carnival events, alongside the Brazilian and Venetian Carnivals. At the time of carnival Nice erupts into a citywide party, with parades in the daytime and evening and a large bonfire and fireworks on Mardi Gras itself. Flower processions, floats, and parties make Nice the place to be for carnival in France. On the first day, the King of carnival arrives at Nice’s Place Masséna in great pomp surrounded by revelers in deafening screams. On the first Sunday afternoon of festivities, the carnival procession is made up of twenty or more floats and as many as 500 ‘big heads’ (paper mache caricatures). On the final day, there is a parade of intense and colorful lights through the streets of Nice. Carnival in Nice was mentioned as early as 1294. Each year since the 1873 carnival Nice France has had a “committee for the parties,” to organize more spectacular floats, more grotesque and fabulous costumes, and a more stunning celebratory atmosphere.

The Carnival of Santa Cruz de Tenerife is one of the most important carnivals of the World. In fact the city of Santa Cruz de Tenerife is twinned with the city of Rio de Janeiro for this reason. The party in the streets of Santa Cruz de Tenerife starts on the Friday before Carnival with a spectacular opening parade, which reaches its height during the night, when thousands of people in fancy dress dance until the early hours of the next day. The carnival has two different parts: The Official Carnival, and the Carnival in the Street. The official one has more than a hundred groups with over fifty components each one. For the Carnival in the Street, there is just the participation of the people in the party. Thousands of people come each day to the streets to participate wearing a disguise. Dance with the local orchestra’s tunes, the Caribbean rhythms, electronic music and music of the year betting throughout the night.

5. The Carnival of Binche, Belgium

The carnival of Binche is an event that takes place each year in the Belgian town of Binche during the Sunday, Monday, and Tuesday preceding Ash Wednesday. Its history dates back to approximately the 14th century. The centrepiece of the carnival’s proceedings are clown-like performers known as Gilles. The Gilles are characterised by their vibrant dress, wax masks and wooden footwear. They number up to 1,000 at any given time, range in age from 3 to 60, and are customarily male. The status of Gille is transmitted from father to son, and only to original inhabitants of the town. From dawn on the morning of the carnival’s final day, Gilles appear in the centre of Binche, to dance to the sound of drums and ward evil spirits away with sticks. Later, during the day, they march through the town with baskets of oranges. These oranges are thrown to and sometimes at the members of the crowd gathered to view the procession.

6. The Carnival of Berlin, Germany

Established in 1996 The Carnival of Cultures in Berlin, Germany has become one of the city’s most popular and anticipated events. The carnival is held each year to celebrate the diversity of cultures within the city. Berlin is home to more than 450,000 people from around the world and proud to be the most international city in Germany. Unique foods and international cuisines, along with music and dancing have brought lots of attention to Berlin. Held during late spring, the carnival offers parades that recognize up to 80 different countries and cultures. Enjoy the samba rhythms, Brazilian drummers, Congolese singers, Korean culture groups, artistic larger than life puppets – and a bit of Rio de Janeiro in the streets of the German capital.

7. The Carnival of New Orleans, USA

Mardi Gras is a popular American festival that started during the mid 1800s. It is another festival, in which American citizens take part to show their respect and support to the existence of the various cultures in the city. The color scheme is always purple, green and gold symbolizing justice, power and faith accordingly. It starts after Twelfth Night, on Epiphany (January 6). A masked ball is held each year to mark the occasion. Celebrations are concentrated for about two weeks before and through Fat Tuesday (Mardi Gras in French), the day before Ash Wednesday. There is usually at least one parade every night starting two Fridays before Mardi Gras. Inexpensive strings of beads and toys have been thrown from floats to parade-goers since at least the late 19th century. More than four million people typically visit New Orleans during Carnival and Mardi Gras each year.

8. The Carnival of Cologne, Germany

The “fifth season of the year” as Carnival is called, begins on November 11th at 11:11 AM. A week-long street festival, also called “the crazy days”, takes place between the Fat Thursday and ends on Ash Wednesday. The “crazy days” of Carnival are celebrated with parties on the streets, in public squares and in pubs. But the highlight of the street carnival is Rose Monday with the march of “Cologne’s Dreigestirn” or Triumvirate – the Prince, the Peasant and the Maiden, who pay a large sum of money for their privileges – in the kilometre-long Rosenmontag procession going through the city. As there have been continuously more than one million spectators on the streets for the Rose Monday parade every year Cologne carnival is one of the largest street festivals in Europe.

9. The Carnival of Basel, Switzerland

The Carnival of Basel is the biggest carnival in Switzerland and takes place annually between February and March in Basel. The quite old town looks like overturning a box of toys on the carnival days. Events kick off with the procession on Monday morning at 4am and end at 4am on Thursday. Over 200 illuminated lanterns are painted with illustrations and are paraded through the street, accompanied by drummers and piccolo players. According to some local historians, the throwing of confetti is a typical tradition from Basel that later spread to the rest of the world. While there is no proof for this theory, the amount of confetti used during Basler carnival is huge in comparison to other carnivals. 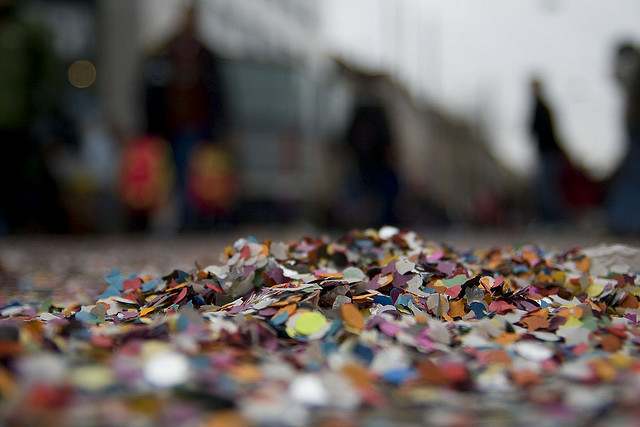 10. The Carnival of Goa, India

The ‘Carnival’ is exclusive and unique to Goa, and was introduced by the Portuguese who ruled over Goa for over five hundred years. The carnival is held in February for three days and nights, when the legendary king Momo takes over the state and the streets come alive with music and color. Huge parades are organized throughout the state with bands, dances and floats out all night on the streets, and grand balls held in the evenings. The carnival concludes with the famous red-and-black dance held by the Club National in Panajim on the final day.