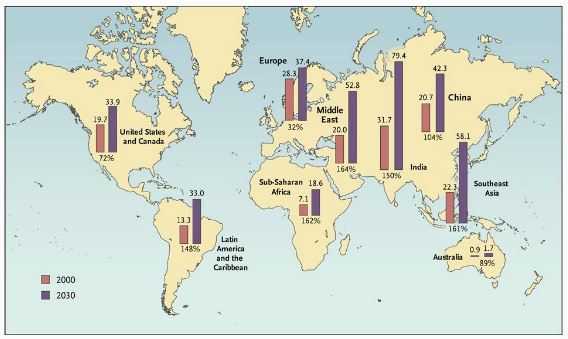 The Effect of Obesity on Diabetes in Western Culture

Westerners have always taken pride in their ability to produce, cook and eat the most sumptuous, savory foods. Food is the centerpiece of family life in much of Western life, with dinnertime often being the main part of the day when a family can get together. Food brings people together, acts as source of comfort, and has for centuries been used for peace offerings, gifts, and to celebrate and to mourn. However, the preoccupation with pleasing the palate has become an obsession in much of Western society.

Obesity in Western culture has become such widespread phenomenon as to be a featured segment on most newscasts at least once a night. Television shows such as “The Biggest Loser” throw a beacon on the problem with glaring klieg lights, putting the issue in front of people in a way many may never have seen it. Whether one sees those kinds of shows as exploitative or just mindless fodder for reality television, it cannot be denied the medium has thrust the issue of obesity into the public eye. Now that the overall health issues of obesity have begun to unanimously trump the issue of looks and physical attractiveness, it has garnered enough attention to be able to get its fair share of research funding and media coverage.

While there are many explanations for the obesity phenomenon, it boils down to more sedentary lifestyles, which are fueled by consumption of nutrient-deficient, calorie-laden foods. A rise in white collar jobs over the last several decades, and automated machinery to make even manual labor easier have combined to reduce the amount of natural exercise people used to get at their jobs. Being over-worked, under-paid and perpetually under tremendous stress in a bad economy does not help the cause. The ‘rat race’ so readily identifiable in American culture has caused the staples of the family dinner table to be pizza and chicken tenders. Hormones and other additives used to preserve and flavor food, as well as speed the growing process, has wreaked havoc on the dietary habits of most people living in Western culture.

When the issue came to the public awareness with such staggering, sudden clarity with the arrival of the Western financial recession and the healthcare issue in the United States came under such fire, it spurred more aggressive research practices and more in-depth care from healthcare providers. There are doctors who specialize in the treatment of obesity, and wellness programs to help those who are obese are so abundant as to be innumerable.

One of the lesser-known aspects of obesity is the issue of its correlation to diabetes mellitus type 2. The lavish lifestyles and notoriously bad eating habits of Westerners have caused the rates of both obesity and diabetes to skyrocket in the last twenty some-odd years, initially leading doctors and researchers to believe obesity must have something to do with late-onset diabetes. Currently, the New England Journal of Medicine reports about ninety percent of diabetes is caused by obesity.

According to National Diabetes Information Clearinghouse (NDIC), a service of the National Institute of Diabetes and Digestive and Kidney Diseases (NIDDK), National Institutes of Health (NIH), there are nearly twenty-six million diagnosed cases of diabetes type 2 in the United States, which makes up almost nine percent of the population.

The cost of obesity and diabetes on the pocketbooks of Western citizens is another catalyst in the drive to substantially lower the number of environmental- and lifestyle-induced cases of diabetes. With the world economy in such dire straits, there is a sudden charge to lower the cost of anything and everything that is not financially solvent. The cost to taxpayers is becoming ever more burdensome as Westerners continue to eat themselves into financial and physical ruin. Until Westerners realize there must be a consistent, responsible move on the part of the general population to control this ever-worsening problem, there is little evidence of any slowing down of the obesity phenomenon, and its ensuing problems such as diabetes.

Is Alli the Weight Loss Answer?