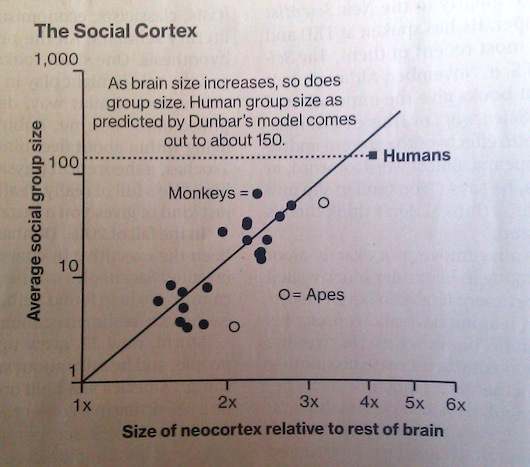 The Dunbar Number and Human Relationships

What is the Dunbar Number?

150 is “the approximate number of people you would not feel embarrassed about joining uninvited for a drink if you happened to bump into them in a bar.” 150 is often referred to as the Dunbar number.

The Project and Social Media

Ten years ago, Robin Dunbar studied the sending of Christmas cards in England. He used the count to measure meaningful social connections. The number sent averaged 153.5, precisely what Dunbar expected. He and other researchers kept finding groupings of 150; self-governing communes, offices of Gore-Tex, etc. Dunbar postulates that this is simply the brain’s limit. Sure, there are outliers, but most people top out at 150 relationships.

Today social media allows us to connect to hundreds or thousands of friends and followers, but Path, a mobile photo-sharing site limits users to 150 friends. Path believes that despite technology, 150 is our human limit. Many agree that digital technology does not allow one to retain old friends and add new ones. Anthropologists believe that the size of our social circle simply can not increase that much, despite tech advances.

Path’s unique selling point is that people feel they can “put things on Path they can’t put anywhere else,” said Dave Morin, co-founder of the network.

“Fundamentally, once you go beyond this number of people you can keep in your head, you begin to filter yourself, you change what you share and how much, you put on your public face.”

Duncan Watts, a network theorist and research scientist at Microsoft says people don’t have better or worse friends, but that they have different friends for different things. Could our circles of 150 exist is social circles at work, at school, and within family?

Dunbar plotted the size of the neocortex of each type of primate with the size group that it lived in. The bigger the neocortex, the larger the group. To predict human group size, Dunbar supplanted the ratio of the human neocortex into the group. The result? 147.8, roughly 150.

Russell Bernard and Peter Killworth (anthropologist and network scientist, respectively) found the mean number of a social network size to be 291. The Journal of American Statistical Association calculated 611. Studies of Facebook and Twitter have found that most users regularly interact with between 100-200 people.

Dunbar guestimates that the average friendship can survive without face-to-face time for six months to a year. Dunbar says women can have two best friends, but a man can only handle one. Dunbar says within the 150, there are other interesting numbers. Three to five are our closest friends. The death of any of our 12-15 closest would devastate us. The next number is 50. After 150 are further circles.

I’m curious. How many connections do you have on social media?
How many did/would you invite to your wedding?
Please share your thoughts on the Dunbar number in the comments below.