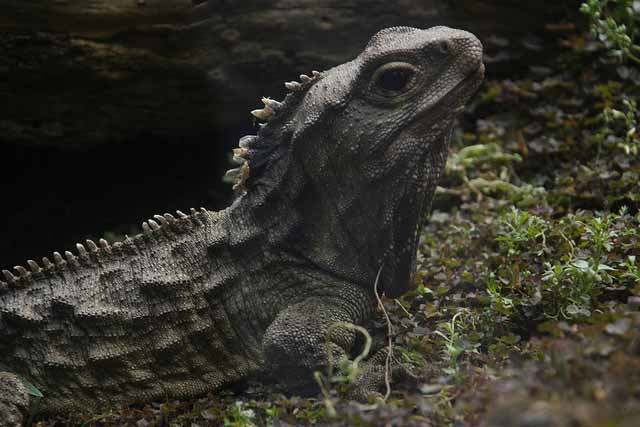 In reality though, some creatures are still around that existed in prehistoric times. Here are some animals that can be seen today that were also around tens, and even hundreds, of millions of years ago.

The Tuatara is a reptile that has been around for about 200 million years. They live mostly in New Zealand. They can grow up to 31 inches and are about 2.9 pounds. They have a spiny crest along their back and are mainly a greenish brown and gray color. It’s also currently an endangered species.

The Giant Chinese Salamander has been around for 30 million years, making it one of the youngest on this list. They live in China and are an extremely endangered species. They’re nearly blind and eat crayfish and smaller salamanders. This salamander can grown up to 5 feet long and weigh 80 pounds.

Triops are also known as tadpole shrimp. They’re about 300 million years old. Eggs can dry up and go into a dormant state so that they can survive an extremely long time, and the eggs must be sufficiently hydrated for an extended period of time to bring the eggs out of their dormant state. As such, eggs are sold in kits so people can hatch and keep them.

The Lamprey is one of the nastier species that has survived. They basically have a big sucker mouth with a lot of teeth. They latch onto fish and drink their blood. They’re about 360 million years old and can grow to about 3 and a half feet long.

The Goblin Shark is about 125 million years old. It has a long, flattened snout, and jaws that are almost separate from the rest of its head. It has extremely sharp teeth. It’s found in the deep sea at below 100 meters. It can grow to be around 10-13 feet long. It’s been found in all three major oceans, but it lives so deeply that humans rarely encounter it.

The giant river stingray has been around for more than 100 million years. They can be found in Thailand, New Guinea, Borneo, and Australia. The rivers are very murky in these countries, so they can be hard to see. It’s considered an endangered species now. Catching them has turned into a sport. Overfishing and habitat loss are why they’re endangered.

The earliest found horseshoe crab fossils date back to 450 million years. They live mainly in shallow ocean waters on soft sand or muddy bottoms. They sometimes come onto shore to mate. They’re found around Asia and the Americas.

Sea sponges, while not the most exciting animals, have been around for at least 760 million years. They do not have organs, and as adults they attach themselves to rocks and let water currents bring food and take away their waste. Juveniles swim freely or drift. Sponges can be found just about anywhere in the world’s oceans.

Jellyfish date back about 505 million years. They’re found in every ocean, and at different depths. They have an umbrella top they use for propulsion and their tentacles can sting prey.

As you can see, there are many animals that exist today that were around during prehistoric times. Some are fairly common, and some are now endangered. What other animals have been discovered dating back to these prehistoric times? What clues can they give us to how things were back then? Do you think there are many more species that have survived this long and we simply haven’t discovered them yet? Share your thoughts with us in the comments.