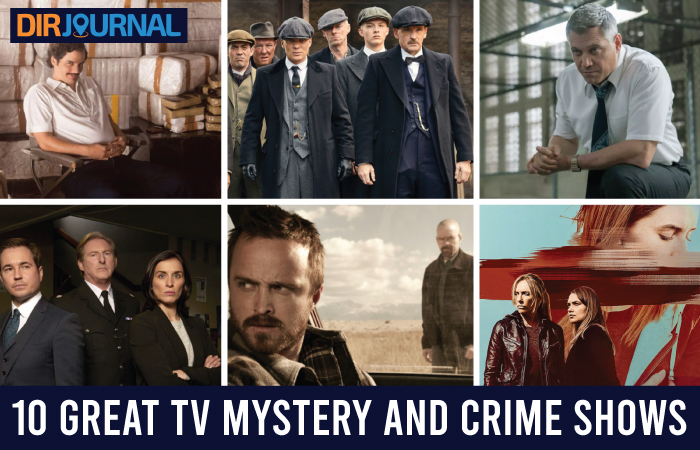 Here are ten of the best television mystery and crime shows, based on personal favorites. It would be impossible for me to watch every crime show that has ever been created, so there is of course a subjective nature to this list. These are also English language shows. I highly encourage you to leave a comment below to share your favorite in your own native language. I love international films, and would love to find some good international mystery and crime series as well.

The following mystery and crime TV shows are listed in alphabetical order and include links to videos from the studios releasing them or other licensed sites when possible. Some videos linked to are available legally for free, and others require a subscription (such as Netflix). Where linking to online videos was not possible, I have attempted to find video clips for illustration purposes to give you a better idea of the series.

This Peter Falk series is a classic detective show. You would think with so many arrests under his belt, criminals would stop underestimating him. But they don’t.

I consider Criminal Minds to be one of the best-written crime dramas currently on TV. Why? Because it legitimately strikes fear in me when I watch it sometimes — more so than horror movies designed to do just that. It makes the risk feel much more real than other crime shows do.

CSI: Crime Scene Investigation isn’t a show I regularly follow anymore after several cast changes. But you have to give it credit for making a new generation interested in the forensic side of solving crimes.

Dexter is a crime show that took me a little while to warm up to. But I couldn’t get over the clever premise of a serial killer who kills other killers. It was unique and turned out to be a great show.

If you like cozy-style mysteries and you watch more modern medical mystery shows (like House), you should give Diagnosis Murder a try. It’s a nice mix of drama and humor, and you really can’t go wrong with Dick Van Dyke.

Here’s another classic crime drama, and a recently ended TV series. I’ve always loved the way L&O episodes split their focus between solving the crimes and prosecuting the cases. It’s almost like getting two shows in one.

This Law and Order spinoff is often referred to as the best series in the Law and Order franchise. Dealing with special victims (such as sex crime and violence against children), this series can be a bit more emotional than most.

Any serious mystery lover knows who Agatha Christie is. And her cozies are always fun to watch, and they make for some of the best British mystery shows around. Miss Marple is one popular series based on her books.

I loved the character of Monk more than the show. Tony Shaloub plays quirky and obsessive-compulsive detective Adrian Monk in this series.

Murder, She Wrote, starring Angela Lansbury, is my all-time favorite mystery TV series. That may be because I also earn a living as a writer like her character does (she’s a mystery novelist), and I happen to be branching into writing mystery fiction now myself. That said, it’s just a casual fun mystery series that I can watch over and over again.

I watched NCIS on the recommendation of family members even though military crime didn’t particularly interest me. And I fell in love with it. It’s a serious, but still fun, series and has a great team of actors on board that keep it interesting.

The Poirot series is another British mystery series based on Agatha Christie’s novels. They’re slower than a lot of more popular current shows, but if you’re interested in a great story, these shouldn’t be missed.

After Murder, She Wrote, Psych is my favorite crime-related television show. I consider it the best-written modern crime series on TV right now. This one involves more comedy than most and it’s the only show around guaranteed to leave me laughing every time I watch.

*Note: When new episodes resume, you can often watch them for a limited time for free at Hulu.com.

If you like forensic-based shows like CSI, you should definitely check out Quincy, M.E. This was an early show based upon a character that is a medical examiner and without it we might not have some of the similar modern shows we love today.

Twin Peaks was a short-lived series, but earned both critical acclaim and a cult fan following. If you can’t get enough of the series, they also filmed a prequel movie (although that didn’t go over quite as well with fans).

I know there are countless other mystery and crime shows out there, and I love learning about new ones (or just “new to me” ones). If you’re a fan of the genre, I bet you do too. So why not leave a comment below and tell us about some other great mysteries and crime shows and why you love them?