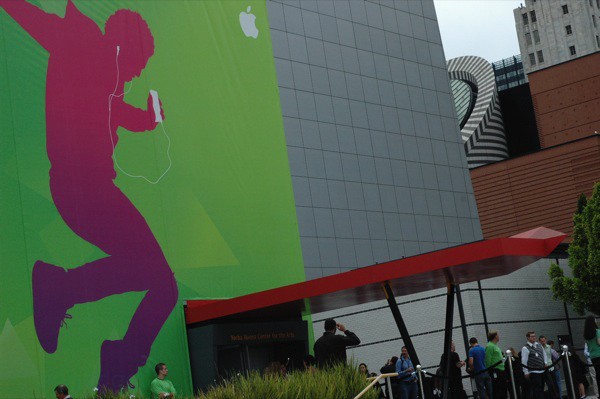 The invitations for Apple’s major music-related “Let’s Rock” event held on September 9, 2008 were sent out to the media and others, inviting them to the Yerba Buena Center for the Performing Arts in San Francisco.

Now with the heavily attended event behind us, the overall takeaway from Let’s Rock is that iPod is back on track. In spite of there being nothing exceptional, the incremental improvements were significant. Through this event, Apple shared a whole year’s worth of progress.

The iPhone has dominated every discussion about Apple the past few days. But at this event, one thing that figured prominently was the iPod product line and iTunes. The timing could not have been better and launching in September gives Apple a lot of time to look at the marketing and distribution ahead of the holiday season shopping.

At this event, Steve Jobs unveiled the sleekly designed iPod nano with a host of new features, an upgraded and cheaper iPod Touch and the new version of iTunes. He expressed his happiness at Apple’s growing dominance in the digital music market.

Upon his entrance, Steve Jobs talked about iTunes. He explained the new features of iTunes 8.0, which are the new “Genius” recommendation engine, a totally changed grid view, a visualizer and better accessibility on Windows and Mac OS X. The iTunes now offers 8.5 million songs, 125000 podcasts, more than 30000 TV shows, 2600 movies and over 3000 apps for iPhone and touch.

The Genius feature allows you to create playlists from songs in your existing library. It also scales to TV shows, podcasts and movies. This is done by selecting any one song and pressing the Genius button, which in turn creates about a 25 to 100 song playlist based on songs you have in your library, which will go well with the song you selected.

There is also a new Genius Sidebar that recommends songs from the iTunes Store based on the song selection. If you have more than one selected song, then it will consider only the first song and show a recommendation based on that.

Steve Jobs also announced that NBC would bring its television lineup back to iTunes. Earlier, both parties had clashes on a couple of issues. NBC executives stated that they wanted Apple to take concrete steps towards the protection of content from piracy, which means they wanted Apple to prevent iPods and iTunes from playing NBC content that is obtained from sources other than the iTunes store. They also wanted variability with pricing of their new programs. Now they have sorted things out and are back together. TV shows from NBC and other networks will cost $1.99 for normal video quality, while the high-definition video quality will cost $2.99. Older shows will cost just 99 cents.

There is new competition for Apple in the form of MySpace which is forming a joint venture with some big music labels, offering music downloads that have no digital rights management software copying restrictions. As far as Apple goes, it only has EMI offering this as of now. Steve Jobs’ comment on this was, “hasn’t seemed to work for them so far. iTunes’ market share is just growing since they started this.”

The charts at the event emphasized that Apple has sold 160 million iPods since 2001 and dominates the U.S. retail market with 73.4 percent share. There was no mention of how many iPhone 3Gs were sold.

Steve Jobs announced that the new fourth-generation iPod nanos are “the cleanest we’ve ever built.” The iPod nano is 0.2 inches thick and is the thinnest player Apple has ever made. It now comes with a built-in accelerometer, which makes resizing of photos possible and menus based on the orientation of the player. It comes in a rainbow of colors; bright blue, orange, purple, green and pink. The entry price is $149 for 8GB and $199 for 16GB.

Touting it as the “funniest iPod ever,” Steve Jobs introduced the new iPod Touch that looks similar to the iPhone sans the calling features and the monthly subscription plan. The new upgraded iPod Touch comes with hardware volume controls and a speaker that were not present in the previous one. It will also cost $70 less than it used to, making the new cost $229.

During the event, Apple promoted the portable gaming angle of iPod Touch heavily, and this could be because of Apple placing it as a competitor to the handheld gaming devices from Sony and Nintendo.

Steve Jobs said that Apple would release a software upgrade on Friday that should fix most of the iPhone problems. As you would know, many iPhone 3G owners have reported difficulty in maintaining high-speed connections on the internet.

The words “The reports of my death are greatly exaggerated” popped up on a large screen behind Steve Jobs, Apple’s chief, when he took the stage at the event and brought smiles all around. This message addressed the speculation about his health in the recent past, especially after he appeared thin and gaunt at the Apple’s developers conference in June.

There were no announcements related to the much-speculated new Mac notebooks. This is actually nothing new as Apple has never announced new Mac hardware at any of their previous events. According to sources, if you are looking for the new MacBooks, you will have to wait for another month.

There was a slight disappointment felt by some, when Steve Jobs failed to follow his usual practice of providing the much-awaited “last-minute” onstage surprise. However, the “Let’s Rock” event was overall a success and was filled with humor and events that will rock the tech world.