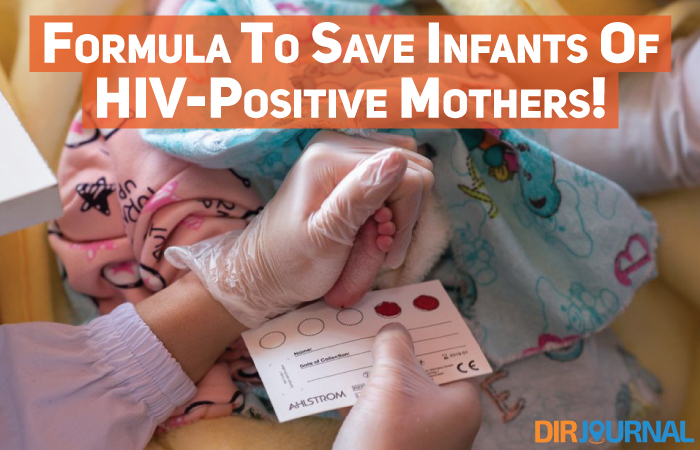 Formula To Save Infants Of HIV-Positive Mothers!

Acquired Immune Deficiency Syndrome (AIDS) is an epidemic that threatens millions of lives globally. Even with all the advancement of science, there is no known cure and the only hope is to prevent the transmission of the AIDS causing Human Immunodeficiency Virus (HIV).

The HIV virus takes several routes to transmit the disease, such as sexual contact, exposure to contaminated blood or blood products, needle sticks and in pregnancy, which is the worst, because it also affects the baby. Breast feeding is said to increase the risk of transmission from mothers to infants by almost 10 to 20%. In countries like the UK and U.S., HIV-positive mothers are advised not to breastfeed; however, in countries that are hardest hit by HIV, such as Africa, HIV-positive mothers have no alternative to breastfeeding and there are no effective methods as of now, to prevent HIV transmission through this route.

In this scary scenario, researchers from the University of Illinois at Chicago and Lavax, of Palatine, Ill., have come up with a ray of hope in the form of a freeze-dried formula that reduces the risk of transmission to the infants. This formula contains good bacteria, which has the potential to capture and destroy this virus.

Researchers reveal that they have isolated a particular strain of probiotic lactobacilli from the mouth of humans. This strain belongs to the same species as the one found in dairy products, such as yogurt.

The HIV virus is captured by this strain by binding itself to the outer envelope of the HIV virus. Since this grows and reproduces in milk, after inoculation with Lactobacillus, the protection for the infant is expected to last till weaning.

The only problem is that, the hot climate and lack of refrigeration facilities in Africa, pose a threat to the shelf-life of lactobacilli.

According to Lin Tao, an associate professor at the University of Illinois at Chicago, “The one major challenge for infant products going to Africa or other poor regions is that they don’t have refrigeration, so anything you send has to be heat-resistant.”

Researchers have taken a giant step closer to handling this issue, and they are already working on a method that makes sure good bacteria remains active even without refrigeration.

They explain that lactobacilli are protected with agents such as trehalose and sucrose, but these protective agents preserve well only at 4 degrees and 20 degrees C. They studied that at warmer temperatures of 33 degrees C, all the Lactobacillus cells died in four weeks time. Researchers searched many food ingredients to find a protective agent that keeps the Lactobacillus alive even in warmer temperatures. They ultimately found an alternative that kept the strain alive for more than 12 weeks even at temperatures of 33 degrees C. In fact, it was found that the strain in the infant formula was perfect in capturing HIV and blocking the infection.

An associate professor at the New York University School of Medicine, Dr. Marc Siegel says, “HIV, though quite deadly as a disease, as a virus is relatively weak, so it’s not surprising to find out that lactobacillus can act against HIV and maybe prevent its incorporation into mammalian cells.”

Now that this problem of keeping the strain alive in heat has been taken care of, researchers are deciding on a perfect method to use, such as a formula or even a lollipop that the infant has to suck on. The infant formula is the more favored product.

Once this bacteria is ingested, it works by colonizing the GI tract of the infant and actively capturing HIV as long as the infant is fed milk.

Dr. Tao also said, “This study provides hope for the prevention of HIV. So far, all of the AIDS vaccines have failed in clinical trials, but this shows that there are alternatives. There are ways to conquer this virus.”

Although, this formula has not yet been tested on humans, there is a lot of excitement among experts in the field of science, as to the huge potential this infant formula has in helping save millions of children’s lives from the HIV virus present in the mother’s milk.