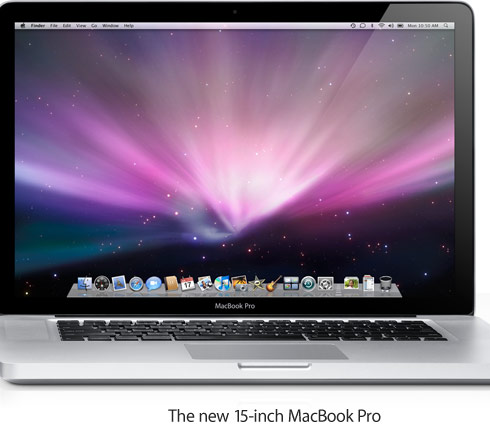 Apple is riding the wave of innovation with the introduction of the new versions of the MacBook Pro and MacBook portable computers, that Steve Jobs revealed were created using a new manufacturing process. They are said to be made from 2.5-pound blocks of aluminium.

These computers were introduced on October 14, 2008, Tuesday, with an audience of about a hundred journalists, bloggers and analysts in an auditorium on Apple’s campus. The main topic of discussion was not the price but the manufacturing process.

According to Apple, this new process would give them scope to create lighter, stronger and far more reliable products. The new MacBooks have been crafted with a single aluminium block, and Apple started off with a 2.5 pound aluminium block. Traditionally, all notebooks are made with numerous parts, but Apple has come up with a unibody. Steve Jobs said that Apple has been trying to create unibody enclosures for some of the new notebooks.

Nvidia was another important topic of discussion and Mr. Jobs declared that several new Macintosh computer models will feature two custom-designed graphics processors from Nvidia. This should enhance the computer viewing experience and game play. Nvidia is also the supplier of the integrating chipset for the MacBook and the MacBook Pro. Mr. Jobs also mentioned that the new Nvidia graphics processor offers much better, at least five times the graphics power of the Intel graphics processors that the MacBooks currently have. This statement does nothing for Intel and leaves a question on Apple’s relationship with Intel, which is the supplier of the central processing unit for the Macintosh.

The MacBook and the 15-inch MacBook Pro also feature brilliant instant-on LED-backlit displays and new glass multi-Touch trackpads, which offer a whole lot more tracking area, allowing users to use several finger gestures, such as swipe, rotate and pinch. They can easily switch between applications with just the touch of a fingertip.

Apple revealed that the new MacBook features everything their customers always wanted; a complete metal enclosure, high performance 3D graphics as well as a LED-backlit display.

The 15-inch MacBook Pro weighs 5.5 pounds and is a good looking and compact piece. It has Intel Core 2 Duo processors, that run up to 2.8 GHz, and provides two options for users. They can either use Nvidia GeForce 9600M GT discrete graphic processor for a more powerful performance or use the Nvidia GeForce 9400M processor for extended battery life. The new MacBook Pro is also available in two models; a 2.4 GHz with 250GB 5400 rpm hard drive and 2.53 GHz with 320GB 5400 rpm hard drive.

Apple updated its MacBook Air, which is sold at a starting price of $1,799 and comes with 50 percent more storage. The 17-inch MacBook Pro has also been updated. The while plastic 13-inch MacBook portable with Intel Core 2 Duo processors, 120GB hard drive as well as a slot-load 8X SuperDrive, comes at a reduced price of $999, a reduction of $100. Although, the price drop may not seem like much, it is a notable feat as this marks the first time Apple is selling a laptop computer for less than $1000.

With all these innovations and better features, Apple expects to see an increase in sales.