These days I’m more confident, but I still have a few of my old tendencies. You’ll see them if you ever come with me to a bookstore. Every so often some guy enters the aisle I’m in and decides that, out of all the books in the entire store, the one he wants to look at is right next to my feet. It doesn’t matter where I happen to be. I could be in the Kinky Backwards Sex aisle and this guy will think, “Hey, that dude looks desperate enough. Maybe he knows where to find that book about banging your coffee machine.”

He’ll decide to walk over and crouch right next to me. Now I don’t know what to do. I have to run through my options. Do I stay there and remain uncomfortable? It could build character after all. Isn’t that how it works? You build character by suffering? If that’s true, that guy who wrote Angela’s Ashes had enough character building to rewrite the Harry Potter series. There’s no way I can compete with that — I only have enough character for a pamphlet.

Maybe I could make a subtle move to make him back off. You know how it is. You’re standing in the checkout line and someone slaps their gut against your back, so you do a little stretch or flare out your elbows. You bump into him, he backs off. “I’m sorry!” you say. “I didn’t see you there!”

Of course in reality you’re wishing you had super strength and your poke knocked him to the back of the store. Really, is anyone going to believe you had to stretch right then and there? You just happened to, at that very moment, walk in line and think, “Wow, my shoulders are really tense. I better do some cardio while the lady rings up my Hot Pockets.”

The final option is to back out and move to another section. If I’m at the end of the aisle and I want to look somewhere else, I’ll walk out. No problem. But what if I want to look at something past the guy who’s reading about coffee sex? I can’t just swing past him. That violates the whole “personal space” thing we’re trying to maintain.

Instead I have to go around. I have to walk out the end of my current aisle, charge through the nearest aisle, then leave that and move to the other end of the aisle where I started. I’ll play this real casual too, even though I look like I’m surveying the area in case I want to tear it down. (But first, I gotta go to the dairy section and tell Welfare Smurf to pack his things.)

Now, I know there’s no reason to act this way. I only avoided people while growing up because I was afraid of rejection. It’s not like I’m alone — we all fuss over our personal space. Even if I was a popular kid, I would’ve probably picked up some of these habits anyway. That’s how our culture is wired. Granted, it broke in the mail, but God just never got around to sending it back.

Think about it. When you get a table at the library, what do you do? You sling your stuff over it. You claim it as your table. Nobody’s going to challenge that — they’d sit on the wall if they could to avoid landing near you or anyone else. Next time someone is forced to sit at your table, feel the tension that swells up. You pretend it doesn’t bother you and he pretends it doesn’t bother him, but it actually bothers you two way too much. Both of you are waiting for the other guy to leave so you can feel safe again. After all, no one must know that I’m still trying to find Waldo.

When you go into a restaurant, do you hate it when the waiter plants you in a booth next to one that’s being used? It’s really bad when the booths are empty, save for one, and the waiter wants me to sit across from it. Haven’t you ever wanted to ask if you can sit in a booth that’s farther away? We don’t do it because we don’t want to look selfish, but really, we’d all like to be the mob boss that rents out the booths around him. And if you’re American, there’s a good chance that your body parts need that space anyway.

Now, I’m not saying you’re bad for feeling this way. It happens to all of us. (Especially me, and I’m damn near perfect.) Still, we can bear to let strangers close once in a while. Heck, if we get used to that, maybe we can strike up conversation with someone who turns out to be a new friend. Sure, Facebook and MySpace are fun, but in the end man is a sociable creature. We have a lot to gain when we move past our boundaries and open ourselves to others. (Just remember — entering a crime scene and shouting “I’ll take it from here” doesn’t count.) 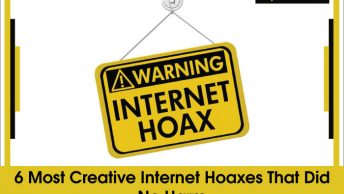 6 Most Creative Internet Hoaxes That Did No Harm