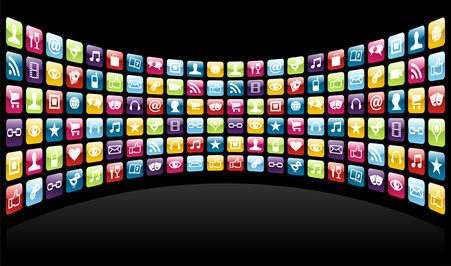 The Task Of Keeping The Apple iPhone Application Store Clean!

What was meant to be an entertainment center that helps iPhone users
download applications is proving to be something Apple did not expect.

Apple is facing unexpected problems with its iPhone application store. Apple boasts their iOS App Store now contains more than 700,000 applications and is one of the most popular entertainment and information tools for mobile phones.

BeautyMeter was one of the applications at the iPhone app store that had to be removed. This photo sharing application was meant for 17 and over, where users have the ability to upload images and rate them on the basis of “hotness.” The application has a built-in safety mechanism as it requires users to enter their iPhone IDs. Apple kept this check to ensure no illegal material is uploaded and for ease of tracking if anyone posts anything untoward.

However, in spite of this check, the problem started when kids started uploading images of themselves in the nude and there have been potentially objectionable materials showing up in the past few weeks. One example that caught the public eye is that of a 15-year-old girl who uploaded her own nude photo, which stayed up for long enough for 5000 users to rate it. It was only then brought to Apple’s notice and pulled down.

This was not the sole incident of its kind. About a week earlier, there was another mobile phone application called “Hottest Girl,” that also showed a photo of a topless woman and was removed from the iPhone app store.

Apple is attracting unnecessary attention due to these happenings. This has raised several questions about Apple’s ability to control iPhone content and keep its app store clean, which prompted Apple to remove BeautyMeter app from its store.

More recently, the PostSecret iPhone App was removed from the App Store due to misuse. There are even sites specifically about the more than 5,000 banned iPhone Apps offering posts such as The 25 Most Ridiculous Banned iPhone Apps.

Apple always had a sterling image of a family-friendly company and in no way would it want to jeopardize that. An Apple company spokesman said, “Apple will not distribute applications that contain inappropriate content, such as pornography.”

While explicit content such as this has the potential to tarnish this image; Apple, like any other website that allows user-submitted content, is doing its best to keep all offensive material at bay. While some iPhone apps are developed by Apple, many are submitted by third-party developers and take their place in the app store after they are approved by Apple.

Experts who know how these things work understand that Apple or the app developers cannot be help responsible for illegal content that shows up in iPhone apps, because there is no way for them to know the type of content that was going to be uploaded by users. This makes it an almost impossible task to keep all such material out of the app store. It becomes even more difficult as the number of new apps keeps increasing.

According to the editor in chief of Engadget, Joshua Topolsky, “It’s completely out of Apple’s control that someone uploaded a nude photo, and to some extent, it’s out of the application developer’s hands as well.”

However, some are of the opinion that Apple can become more stringent with its policies on the type of appllications it approves. Apple is said to approve almost 96% of the app submitted for approval by developers.

However, an approval does not necessarily mean the app will stay up forever. There have been several apps that have been pulled from the store because they were offensive. One such app was pulled because it streamed a song with offensive lyrics. Another iPhone app where users could shake a digital crying baby to death was removed as Apple found it deeply offensive. It even apologized for approving it in the first place.

Recently, in an update to the iPhone software, Apple began providing users with the right to choose the type of content they would want to block from their phones. They have also asked developers to submit age appropriate lables. A new parental-control system that allows iPhone owners to decide what apps they want to buy has been incorporated.

Apple is doing its bit to keep illegal and offensive material, such as pornography away from their app store as they are proud of their image and would do everything possible to keep it intact.

The Kill Switch In Phones – Breach Of Freedom?