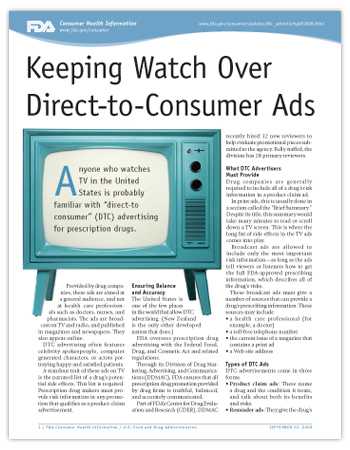 In 1997 the United States federal government opened the floodgates for direct-to-consumer marketing of pharmaceuticals by relaxing previous restrictions and legislation.[1] Just one year prior, reports indicated pharmaceutical sales advertising expenditures ranged around just over half a billion dollars. By 2009, that amount had skyrocketed to nearly five billion dollars, just in direct-to-consumer advertising alone, not including advertising to physicians and clinicians. [2]

With the dawn of DTC advertising, consumers were able to see for themselves the plethora of prescription drugs available to them for any and every type of ailment and illness. Until that time, the average consumer was relegated to blind faith in their physician, and his advice to, “Take two of these and call me tomorrow.” A report by AARP from 2010 indicates 90% of Americans aged 18 and over have heard or seen a pharmaceutical advertisement. [3]

There are three basic recognized direct-to-consumer ad campaign types: product claim ads, help seeking ads, and reminder ads.[4] These marketing types fall under various policies and laws, and are not all regulated by the FDA. Their focus on certain drugs goes from unmistakable and deliberate, to mere presumptions of knowledge about a product on the part of the consumer.

Pro-activists for the direct-to-consumer cause tout the benefits of more knowledge on behalf of the individual patient. Such knowledge, they say, allows consumers to make more informed choices, along with their physician, as to the best course for their care. Physicians have reported a more active role on the part of the patient, which leads to a better quality of care in most instances. Patients being more informed about their own medical conditions and having and informed understanding of their healthcare could quite possibly play a very important role in provisional quality care in the United States with all the upcoming changes to healthcare laws regulations.

The question arises as to whether or not the ideals of the stronger physician/patient relationship actually work in retrograde. Naysayers point to the many physicians reporting a more aggressive approach on the part of some patients, who insist they need a certain type of medication or procedure, when it would not, in fact, be beneficial to them. Doctors report a feeling on the part of patients that the doctor is withholding something from them, when in fact the doctor simply wants not to over-diagnose or over-prescribe. Physicians describes incidents where they have had to “fire” patients due to the patients’ refusals to cooperate with what the doctor wants to prescribe for a course of treatment.

With the enactment of laws to prohibit drug companies from overstating the benefits of drugs while understating the risks and side-effects, the pharmaceutical industry has been forced to re-evaluate how it presents its products to the consumer. A 2010 report from Reuters tends to suggest it is somewhat of a cat-and-mouse game, with the FDA constantly trying to stay up-to-date on the most recent hard advertising push by ‘Big Pharma’.[5]

As insurance premiums and prescription prices increase, the pharmaceutical industry will have no choice but continue to push sales to stay in the market. There will have to be an eventual understanding between the physician, the patient and the regulating bodies as to how patients are informed of all their treatment options. Until then, it is ultimately up to the consumer to make informed educated choices about their health, while remembering to take into consideration the opinions of the physicians, who are, ultimately, the final authority on what treatments and prescriptions are appropriate to each situation.