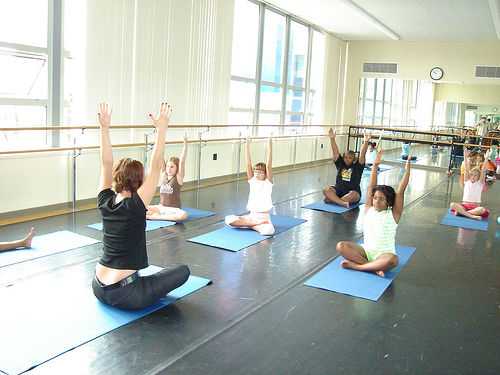 Yoga For Children: Hundreds Of Children In The United States Learn Yoga Amidst Controversies!

The kids step back into a high lunge and kick back their legs straight and hold that push up for 10 seconds. Then they close one nostril and inhale through the other repeating this with both the nostrils.  They meditate and chant, and finally, they lie down quietly on their mats for a few seconds.

These kids are doing Yoga!  Once accessible only to the privileged kids, now even the poor kids who speak other languages are being taught Yoga in studios from Minnesota to Russia. Most of these kids are first and second graders and are “little” expert yogis.

Latest research revealed that the younger children of today suffer from increased stress, with only a few stress-handling programs available to help them deal with this. This is where yoga helps to a great extent.

It has long been established that yoga has the power to channel children’s energy in the right direction. The aim of Yoga is to teach them self-control and relaxation through breathing exercises, meditation and physical postures.

It has been proved through studies that yoga increases emotional balance in the long-term in children and reduces all sorts of fears.  Even feelings of aggression and helplessness are dramatically reduced.

The best thing about conducting these yoga classes in schools is that children can transfer what they learn to situations beyond school, in order to relax after school and to control any negative feelings. This makes yoga a perfectly independent control method for children.

In spite of all these benefits of yoga, it is still not free of controversy in the United States.  In the recent years, there has been a Baptist minister that complained of a public school teaching a form of Hinduisim – when all the school was doing is teach yoga to its students.  In Aspen, Christian fundamentalists and some parents complained to the school board, and argued that yoga’s Hindu roots conflict with Christian teachings.  These people portrayed yoga as a new-age nut used to brainwash young minds.

This led to the birth of a reformed yoga, named “Yoga Ed,” in which there is no chanting as is done in yoga normally.  Even the language used is beautifully sounding kid-friendly English instead of Sanskrit. The panting of yoga has transformed into “bunny breathing,” and meditation is now “time-in.” This American yoga form is stripped of everything that could even vaguely be construed as religious or spiritual.  At least 150 schools in the US adopted this yoga program with more than 300 physical education instructors trained to teach their students. Numerous other private and public schools also teach yoga today in the different States.

Teachers vouch by yoga and say they have noticed that it also has a calming effect on kids with Attention-deficit disorder (ADD) as well as proving to be highly beneficial in childhood obesity.  A lot less behavioral problems are seen in students who take yoga classes.

In a study conducted on several school children, researchers found a strong correlation between better grades and behavior and yoga. These young “yogis” have been reported to be much more fit than the California Physical Fitness Test.

Americans have realized the benefits of yoga and they spend billions of dollars on yoga classes, books, mats, DVDs and other related items.

However, concerns about yoga’s spiritual implications continue to pop up, with the main concern being that it goads young children into exploring religions other than Christianity.

According to the author of “Yoga and the Body of Christ,” “Yoga is a religious practice in Hinduism.  It’s the way to reach enlightenment.  To bring it to the west and bill it as a scientific practice for fitness is dishonest.”  He said, “I’ve talked to too many people who got hooked on the spiritual deception of yoga.  They come to believe in this and become enamored with Hinduism or eastern mysticism.”

These arguments confuse some practicing yogis in the West, who say that yoga is practiced in the United States as a way of fitness of the body and stress relief, and has nothing to do with religion or spiritualism.

In spite of a section of society lobbying against yoga, it continues to be taught to children between 5 and 12 years in hundreds of schools, with excellent results. Have you joined your kid in yoga?