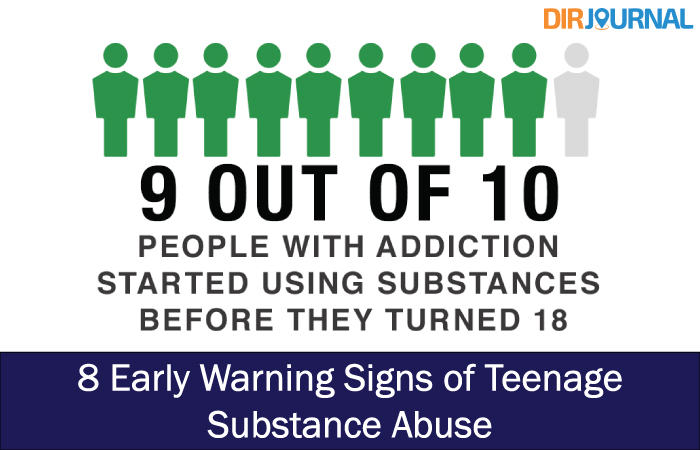 Raising a teenager can be very challenging. Between hormonal changes and normal mood swings, it is often difficult to discern what is normal and what could be a sign of a bigger problem.

Experimenting with drugs and alcohol is not uncommon. Some may have a drink upon occasion or smoke pot a few times out of curiosity.

Addiction is a very different scenario. It is a chronic brain disease that causes people to continue using drugs or drinking even when they know it is wrong and can have serious side effects.

A teenager’s brain is still developing, which makes them a higher risk for addiction than adults.

However, you should never ignore symptoms as they could be signs of underlying mental health issues or an addiction problem.

It is not easy to determine if your teenager is abusing drugs or alcohol or if they are simply behaving like a typical teenager.

If you notice some of the warning signs below, seek professional help that includes an assessment to determine if they do have an abuse problem.

If they do, it is vital to follow up with appropriate treatment such as drug rehab if necessary.

Hanging Out with Different Group of Friends

The teenage years are tumultuous as they are a stepping-stone from childhood to adulthood. It is a time when teens are seeking independence, assessing priorities, and making decisions that could likely affect their lives long-term.

Unfortunately, teenagers can also be brutal to each other. They bully others about their weight, what they wear, or things they say.

Changing who they hang out with can be a normal reaction to not wanting to be with teens who are unkind.

However, it can also be a sign that your child has decided to be part of a group that partakes in dangerous behaviors such as drinking and taking drugs.

Keeping communication channels open with your teen is very difficult but also imperative. If you notice their friends are different than those they grew up with, arrange to meet them and talk with your teenager about it.

Unless you have a very open and honest relationship with your teen, don’t expect them to be thrilled with your interest.

Remember, they are looking to separate themselves from you to get ready for adulthood. Don’t give up though; it’s well worth the effort.

There are some visible signs of drug use, such as bloodshot eyes. Don’t jump to conclusions though because other conditions can also cause the same symptoms such as allergies or colds.

When you see multiple physical changes happening at the same time, there is more reason for concern. Some of these symptoms include:

If you see several of the above physical changes, take your child to a physician for an evaluation.

When teens start showing new and negative personality changes, it could be an early sign of substance abuse.

Some common changes to look out for are:

When teenagers start having relationship problems with friends, family, and classmates, it’s time to find out why.

Although moodiness is a common trait amongst teenagers, more severe mood swings and extreme behaviors are not normal. Watch out for some of the following:

Teenagers who are abusing drugs may also destroy property, run away from home, or threaten to drop out of school.

Lasting behavioral changes are often the first visible signs of drug use. Occasional poor behaviors and taken in isolation, one sign is not enough to assume your child is abusing drugs.

On the other hand, when your teen exhibits several of the behaviors below, it could be a significant concern and should be evaluated:

Psychological changes are longer-lasting and more pervasive than mood changes. They include:

There are many obvious and visible signs that your teenager is using and possibly abusing drugs, including:

Drug and alcohol abuse can cause many health problems. As a parent, pay attention to the following before they become serious or deadly:

By the time your teen exhibits the health problems listed above, they are more than likely already addicted.

Many signs such as changing friends and moodiness could be a normal stage of growing up. As a parent of a teenager, you are in the best positions to notice if something more dangerous is going on behind the scenes.

Try to refrain from confronting them with accusations. Instead, start a conversation and allow them to explain. Listen carefully to their responses and try your best to ascertain if there is a more severe problem that requires intervention.