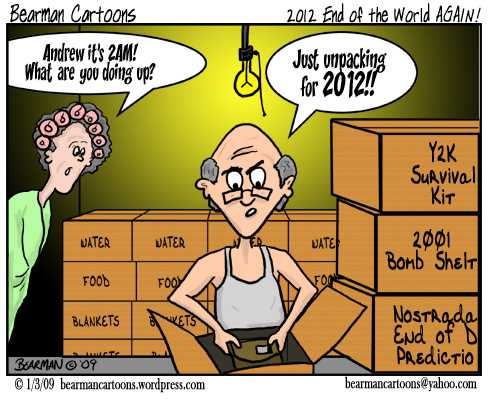 Failed Prophecies: Major Doomsday Predictions That Did Not Come True!

With the latest big screen offering, “2012” a $200m production, based on myths that have their origin in the Mayan calendar, talking about the end of the world, there is no better time than this to write about such predictions.

Here are the top ten doomsday predictions that did not happen, based on a column by Benjamin Radford, in Live Science.

Throughout the centuries, there have been several people who claimed that Jesus Christ would return, but what happened in Leeds, England is the strangest proclamation ever. It is said that a hen started laying eggs on which “Christ is coming” was written.  This was huge news in those days and people were totally convinced that doomsday is nearing.  But one fine day, it was discovered by a local that it was all nothing but a hoax. The eggs were taken out, written on with corrosive ink and put back.

William Miller, a New England farmer, after going through the bible carefully told people that God’s chosen time to end the world is going to be on April 23, 1843.  He managed to convince people to an extent that it gave birth to Millerites, his followers. Many people believed his predictions to be true, so much so that they even went to the extent of giving away or selling their possessions.  But April 23 came and went with no sign of Jesus.  The Seventh Day Adventists are people from this group who have divided after the prophecy failed.

Joseph Smith, founder of the Mormon church, held a meeting in February 1835 to tell church leaders that he had spoken to God and during the conversation he was told that Jesus would return within the next 56 years.

In May 1980, televangelist and Christian Coalition founder Pat Robertson shocked and alarmed his audience around the world by saying that he knew when the world would come to an end.  He said, “I guarantee you by the end of 1982 there is going to be a judgment on the world.”

In 1881, an astronomer found that comet tails contain cyanogens, which is a deadly gas related to cyanide.  This was just another bit of news until it was discovered that that Earth would pass through the tail of Halley’s comet in 1910. There was a lot of speculation that the Earth might be bathed in the toxic gas when it passes through the tail of the comet and it caused panic, until scientists intervened to tell people to calm down and that no such thing is going to happen.

In 1997, with the appearance of comet Hale-Bopp, there were rumors that an alien aircraft was following this comet. Heaven’s Gate, a UFO cult, based on these rumors, concluded that the world would end soon.  However, the world ended only for 39 of the cult members on March 26, 1997, when they committed suicide.

For hundreds of years, people have found the metaphorical writings of Michel de Nostrdame intriguing. One of his most famous predictions read as, “The year 1999, seventh month/From the sky will come great king of terror.” Devotees were concerned that this was the vision of Armageddon.

Towards the end of the last century, with the coming of the computers, people began speculating that computers will trigger doomsday. They believed that PCs will not be able to tell the difference between 2000 and 1900 dates, and suggested problems leading to N-holocaust.

“5/5/2000 Ice: the Ultimate Disaster” written by Richard Noone says that by the year 2000, there would a three-mile thick mass of Antarctic Ice.  It was said that on this day, the planets would also be aligned in the heavens, and would somehow lead to a global icy death.

God’s Church minister Ronald Weinland predicted in 2006 that there will be death of millions of people by the end of 2006, and the world will face the worst times in human history within two years after that.  One of his predictions also said that the United States would no longer be the world’s most powerful nation.

Many people now say that these prophecies may not really happen.  However, when a new prediction is made, we can be sure that speculations will begin all over again.

You might also enjoy Worst Manmade Ecological Disasters and The War on Terrorism vs. Mother Nature: Death Tolls.